Who Are the Rebels Controlling Flight MH17's Crash Site?

Armed pro-Russian separatists stand guard in front of the crash site of Malaysia Airlines Flight MH17, near the village of Grabove, in the region of Donetsk on July 20, 2014.
Bulent Kilic—AFP/Getty Images
By Mirren Gidda

On Monday the two black boxes from flight MH17 were finally handed over to Malaysian experts who had been petitioning for their safe recovery. The black boxes, however, weren’t returned by the Ukrainian government, but by pro-Russian separatists from the so-called “Donetsk People’s Republic”.

The handover, attended by international press, did not seem bound by diplomatic protocols. Hulking rebels dressed in camouflage loomed over the diminutive leader of the Malaysian delegation as he addressed the media.

Next to him stood their leader, Alexander Borodai, the self-styled Prime Minister of the Donetsk People’s Republic, who had negotiated the black boxes’ return with Malaysian Prime Minister Najib Razak. During the talks, Borodai had also agreed to transport the bodies of the victims to Kharkiv, in northeastern Ukraine, to be flown out to the Netherlands for identification. He later kept his word.

But what authority did Borodai have to negotiate the terms of the agreement with a world leader? Little more than the authority of the gun. In April, a gang led by Borodai and another rebel, Igor Girkin, declared the eastern province of Donetsk a republic. Girkin, who goes by the moniker “Strelkov” meaning shooter, is Borodai’s right hand man, running the armed forces within the so-called “Republic.” Negotiations between the two prime ministers—legitimate or otherwise—may have been fraught given that Girkin reportedly boasted about shooting down the plane.

Despite their grand claim to have founded a republic, Andrew Weiss, a vice president at the Carnegie Endowment, told TIME Borodai and Girkin only control shifting parts of the region, which is also populated by other separatist groups numbering about 5,000 rebels.

The separatists are far from a unified force, says James Nixey, head of the Russia and Eurasia program at Chatham House. “They are a series of disparate and only vaguely interconnected groups,” he says. “They’re very disorganized with no real structure or headquarters. Most of the rebels are poorly trained, ill-educated and ignorant of geopolitics.”

Borodai and Girkin however, aren’t everyday thugs like some of their rebel brethren. The pair are both Russian nationals with suspected ties to the Kremlin and experience in separatist conflicts.

Borodai, 41, is rumored to be particularly close to Moscow. In the early 1990s he wrote regularly for the far-right newspaper Zavtra and in 2011 founded the nationalist television channel Den-TV. He confirmed earlier this year that he worked as an adviser to the separatist Prime Minister of Crimea, Sergey Aksyonov. Russia annexed Crimea in March.

Borodai claims he was invited to eastern Ukraine by Girkin, a former Russian security-service officer. Girkin, meanwhile, has alleged he was asked to head the rebellion in eastern Ukraine, though refuses to say by whom. Like Borodai, he also advised separatists in Crimea.

The Russian pair’s group may have staked their claim to the crash site—Iryna Gudyma, a spokesperson for the Organization for Security and Co-operation in Europe who is currently in the area told TIME “we’ve only encountered armed rebels from the Donetsk People’s Republic”—but other rebels are on the scene.

The Wall Street Journal has claimed Cossacks led by commander Nikolai Kozitsin control part of the area where MH17 fell. Unlike Borodai and Girkin, Kozitsin is a Ukrainian who was born in Donetsk. Like them, he has been involved in separatist conflicts in Transnistria and Georgia.

On July 18, the day after the crash, Ukrainian authorities released a transcript of a conversation in which a man they identified as Kozitsin says of MH17: “they shouldn’t be flying. There’s a war going on.” Another transcript implicates Igor Bezler, known to his men as “Bes”, or “devil.” During a call Bezler reportedly told a Russian intelligence officer his men shot down a plane. Bezler’s group currently controls the town of Horlivka in Donetsk province.

But none of the rebel leaders have any overarching authority. “The people who are leaders in east Ukraine are not playing leading roles,” says Sam Greene, director of King’s College London’s Russian Institute. “They hold the de facto power in that part of the Ukraine but that’s all. They don’t have long established electoral legitimacy.” Borodai was only allowed to speak to the Malaysian Prime Minister because his men currently control the area.

Any fleeting power the groups have is considerably bolstered by Russia’s supply of money and weapons into the region, but that may soon cease. “Moscow’s commitment to supporting the rebels is waning, particularly after MH17,” notes Greene. “The costs are becoming too high politically both in terms of sanctions and the damage to Putin’s international reputation.”

And without Russian support, the future of the Donetsk People’s Republic looks decidedly shaky. 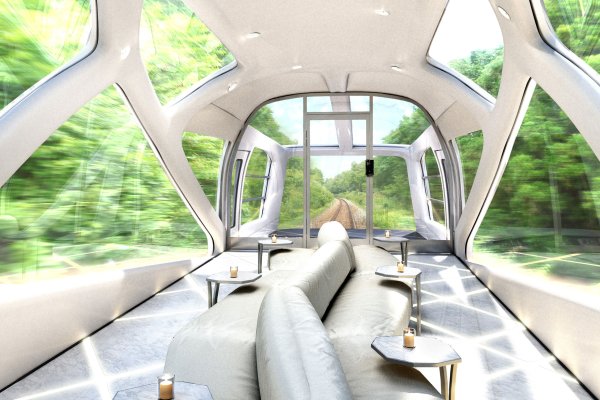 These Are Japan's Coolest New Trains
Next Up: Editor's Pick