Rebels' Control of the MH17 Crash Site Could Foil an Investigation

When a terrorist’s bomb destroyed Pan Am Flight 103 in 1988 killing all passengers on board, investigators posed the unavoidable question: had anyone survived the initial blast? Officials concluded yes, pointing to a fragile clue: the way one victim lay dead, her hand clutching a palmful of freshly torn grass.

For the nascent MH17 investigation, that question may remain unanswered. Ukrainian Pro-Russia separatists were first on the scene, and they hauled away bodies before international officials arrived, potentially ruining the investigation site. On top of that, some reports suggest the rebels removed evidence from the site. While the separatists have turned over the Boeing 777’s black boxes and allowed some officials access to the crash site, a proper investigation is being further jeopardized as separatists chase away some experts trained to photograph, map and carefully gather debris and human remains.

As in all air crash investigations, officials analyzing Flight MH17 must literally piece together evidence—or what’s left of it—to answer a slew of haunting questions, questions that may be left unanswered even after the black boxes are analyzed: Why did the plane go down? Did it break up in midair? Could passengers have survived? Who’s to blame?

The tiniest bits of evidence have shed light on the world’s most gut-wrenching aviation disasters. In other words, it doesn’t take much to foil an investigation.

“You can look at ValuJet, TWA 800, Swissair, Alaska Air—all of those were accident investigations in which one piece was important in terms of determining the causes,” James E. Hall, a former National Transportation Safety Board chairman, told TIME. “I wasn’t expecting these rebels to know how to secure a scene, but there were certainly people in Russia who knew how to do that.”

For Pan Am Flight 103, it was a fragment of the plane’s cargo rail that sufficiently proved that an explosive, not structural failure, had doomed the aircraft. The strip was puckered with small craters, proof that gases of a combusting bomb torched their telltale signature into the metal. Until then, investigators were unable to reach a conclusion despite several clues pointing to a bomb: the autopilot still on; oxygen masks un-deployed; debris scattered over 2,000 square km.; intelligence reports suspecting an airplane bombing; and four groups’ having claimed responsibility within 24 hours of the crash.

In the case of MH17, that Ukrainian rebels fired a BUK surface-to-air missile at the Boeing 777 similarly appear to be backed by strong evidence, from intercepted conversations to now-deleted social media posts. Barack Obama thinks so. John Kerry thinks so. And so too does the U.S. Embassy in Kiev. But in almost all cases, to formally close an air crash investigation requires definitive evidence. Still, images have already surfaced of what appears to be shrapnel damage on MH17 debris. Experts believe that damage is consistent with a surface-to-air missile explosion.

“Based on the pattern of the fragments that impacted the airplane, it would be possible to determine the position and size of the warhead when it detonated. That information could indicate the type of weapon used,” Tom Haueter, former director of the NTSB’s Office of Aviation Safety, told TIME in an e-mail. “It is also possible that fragments of the warhead or the parts of the missile could be recovered. That information could indicate who manufactured the weapon.”

In investigations with fewer leads, it becomes increasingly paramount to account for each piece of the horrifying puzzle. In 1987, investigators struggled to identify the passenger aboard PSA 1771 who shot the pilots before putting the plane into a nosedive, then crashing it at a speed faster than sound. Eventually, a tiny fingertip fragment on the murder weapon allowed the FBI to definitively determine the gunman’s identity. Similarly, when TWA 800 mysteriously exploded in mid-air in 1996 off Long Island, killing all 230 on board, the NTSB concluded its investigation in 2000 with only a probable cause: a short circuit sparking a fuel tank explosion. There was no definitive evidence of malfunctioned electrical wiring, even though the sound spectrum analysis of the explosion was consistent with an electrical one. The lack of a definitive cause for Flight 800’s destruction allowed conspiracy theories about a missile or bomb to run rampant even to this day.

“We retrieved almost 99% of the [Flight 800] aircraft, and then reconstructed it, and even with that, the one pump that we thought threw the short [circuit] was not located,” said Hall, who oversaw the TWA 800 case while NTSB chairman.

On the MH17 debris field, the removal of bodies and evidence complicates not only the criminal investigation but also the safety investigation. That some victims were bloody indicates that they may have had beating hearts after impact — that’s how coroners confirmed one victim of the Asiana Airlines Flight 214 crash last year was alive before she was hit by a fire truck responding to the accident and killed. Resting body positions may show telling movements in passengers’ final moments — when Air Canada Flight 797 filled with smoke and ignited after an emergency landing, victims were found burned to death on their hands and knees, a sign that some were still evacuating. In fact, strapped-in bodies indicate victims were likely ejected from the aircraft after an explosion: a sign that survival wasn’t totally impossible, like in 1971 when Juliane Koepcke lived to tell the story after lightning damaged her plane and she fell 3 kilometers to the ground.

MH17 victims’ bodies are expected to arrive in Amsterdam on Wednesday. Whatever closure that may bring to the victims’ families, it will be only the beginning for forensic and air accident experts, whose vital investigations have been delayed by almost a week. But what happened with MH17’s crash site is not unique, Hall says. Rather, it’s a common problem in less-developed areas of the world where bystanders manage to access the scene before international aviation officials arrive. If that happens, as it did for MH17, then there’s no way to know if any findings will accurately represent the events that took place. 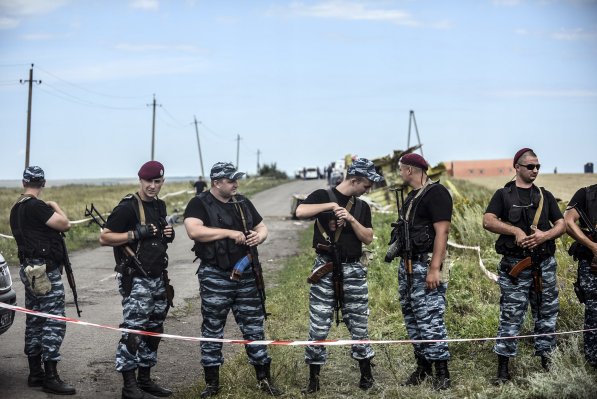 Who Are the Rebels Controlling Flight MH17's Crash Site?
Next Up: Editor's Pick