Bodies of those aboard MH17 alongside a road in eastern Ukraine on Sunday.
Brendan Hoffman / Getty Images
By Mark Thompson

General Secretary Yuri Andropov’s Soviet Union played Russian roulette in the early morning hours of Sept. 1, 1983, when an Su-15 interceptor shot down Korean Air Lines Flight 007, killing all 269 aboard. He died six months later, and his Soviet Union died six years after him, dragged into history, in part, by the horror the shootdown represented, and what it told the rest of the world about the trigger-puller.

Three decades later, Russian president Vladimir Putin seems to be playing the same dangerous game, as pro-Russian separatists in Ukraine apparently used an SA-11 missile system to blast Malaysia Airlines Flight 17 from the skies, killing all 298 on board an Amsterdam-to-Kuala Lumpur trip.

That was bad enough. It got worse over the weekend as intelligence surfaced suggesting that the SA-11 wasn’t one that the separatists had captured from Ukraine’s arsenal last month. Instead, SA-11 launchers, and perhaps their operators, appear to have been “on loan” from Russian military units just across the border.

As world outrage at Putin continued to rise Sunday, the Russian leader seemed content to play another round of Russian roulette. But his actions make clear that he added a second bullet to his revolver’s cylinder before spinning it anew.

Within hours of the shootdown, U.S. and Ukrainian intelligence sources believe that three SA-11 units were moved from rebel-held territory in eastern Ukraine across the border onto Russian soil. Meanwhile, some of the dead—including nearly 200 Dutch citizens, but no Russians or Ukrainians—continued to rot in the wheat and sunflower fields. Drunken separatists, according to Secretary of State John Kerry, have been loading other bodies onto trucks. Putin, by all accounts, is taking pains to ensure that any investigation into who shot down the Boeing 777 won’t get to the scene in a major way until the trail has grown cold.

KAL 007 contributed to the end of the Soviet Union, highlighting its bloodlust as well as its moral bankruptcy. Its denials and obfuscations—first the Soviets denied shooting it down, then they defended it because they deemed KAL 007 to be a spy plane—generated disbelief in many corners of the globe. President Reagan declared it “an act of barbarism,” and Soviet hammer-and-sickle flags were burned. Andropov & Co. barred search vessels from the area.

“Andropov, notwithstanding whatever he actually may have believed about Soviet responsibility, was forced onto the defensive and evidently felt compelled to justify the USSR’s actions at all costs,” the CIA’s official recounting of the episode said. “The US follow-on campaign at the UN and in other channels to embarrass and isolate the USSR in the international community undoubtedly contributed to Moscow’s penchant to see an anti-Soviet plot. In the Soviet view, a campaign of this scope and magnitude that just happened to dovetail with the Reagan administration’s moral critique of the USSR must have been more than simply a chance opportunity seized by Washington in the heat of the moment. President Reagan’s decision to use the KAL 007 shootdown to persuade Congress to support his requests for increased defense spending and the new MX missile pointed in the same direction, in Moscow’s view.”

Visitors view an exhibition dedicated to the former Communist leader and KGB head, Yuri Andropov, in Moscow, on July 6, 2014. Nostalgic about the might of vanished Soviet empire, Russia marked the 100th anniversary of Andropov's birth with exhibitions and television films glorifying the Soviet leader who was in charge when his nation's military shot down KAL 007 in 1983.
KIRILL KUDRYAVTSEV / AFP / Getty Images

But don’t look for a quick change in Putin’s attitude. Frank Carlucci, who served Reagan as defense secretary and national security adviser, recalled riding in the back seat of a car through Ukraine with Soviet defense minister Dmitri Yazov after the KAL 007 shootdown:

The KAL 007 shootdown, piled atop the Soviet invasion of Afghanistan, the declaration of martial law in Soviet-puppet Poland, and Reagan’s increased defense spending topped with his “Star Wars” missile-defense program, cleared the way for the rise of Mikhail Gorbachev, the vanguard of a new class of Soviet leader who presided over the end of the Soviet Union.

Yet Putin’s hero isn’t Gorbachev, but Andropov. As the head of Russian intelligence, Putin “laid flowers on Andropov’s grave, and dedicated a plaque to his hero inside the Lubyanka, the KGB’s notorious Moscow headquarters,” Russia expert and columnist Anne Applebaum has written. “Later, as president, he ordered another plaque placed on the Moscow building where Andropov had lived and erected a statue to him in a St. Petersburg suburb. But Putin wanted to restore more than Andropov’s name. He also, it seems, wanted to restore the old KGB boss’s way of thinking.”

Since Thursday, to the shock of those who haven’t been paying attention before that sad day, he has been doing just that. 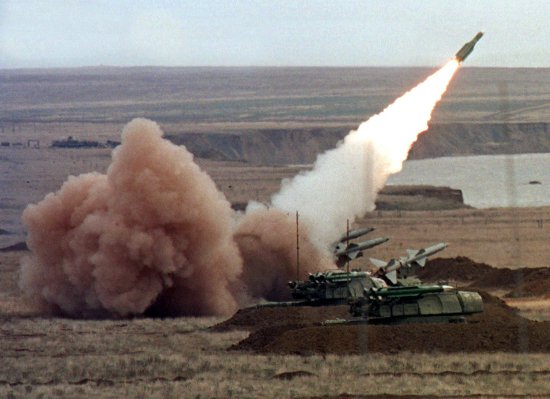 A Working Theory of the MH17 Shootdown
Next Up: Editor's Pick