Russian President Vladimir Putin arrives for the Orthodox festival to honour the birthday of Venerable Sergius of Radonezh in the Trinity Lavra of St.Sergius on July 18, 2014, in Sergiyev Posad.
Sasha Mordovets—Getty Images
By Simon Shuster

At some point on Thursday evening, just after Malaysia Airlines Flight 17 blew apart over some wheat field in eastern Ukraine, Vladimir Putin had a chance to take stock of his options. There were essentially two. The Russian President could stand behind the rebel fighters in eastern Ukraine, even as suspicion grew that they were responsible for shooting the airliner down, and risk implicating Russia in the tragedy and deepening the Kremlin’s conflict with Ukraine and with the West. The other option, a familiar one for Putin, would be to use the senseless loss of life as an opportunity to shift toward reconciliation.

He had taken the latter approach a few years ago, in 2010, when a plane carrying Polish President Lech Kaczyński and his entourage crashed in western Russia, killing everyone on board. To the surprise of many in Poland, Putin took that tragedy as a chance to make amends, however briefly, easing the history of mistrust between the two nations. His displays of mourning and commiseration – Putin even hugged and comforted Polish Prime Minister Donald Tusk near the crash site – allowed Russians and Poles to call each other brothers for the first time in a generation.

Taking the same approach after Thursday’s catastrophe would have helped Putin on several fronts. He could have distanced himself from the increasingly erratic rebel leaders in Ukraine and their supporters in Russia, who have been goading Putin deeper into war, without looking weak or inconsistent at home. More important for his interests, he could have defused the West’s case for further sanctions against Russia, at least by working with Ukraine to investigate the tragedy and showing some remorse for his role in fueling the conflict that, ultimately, led to the downing of that plane. But Putin seems to have chosen otherwise.

Instead of the displays of empathy he showed after the crash of the Polish plane four years ago, Putin immediately began casting blame on Ukraine and shielding the rebels from criticism. Some observers have suggested that this was a kneejerk reaction rather than a well-considered choice. “The Kremlin will, for all its immediate and instinctive bluster and spin, have to definitively and overtly withdraw from arming and protecting the rebels,” wrote Mark Galleoti, a prominent Russia expert and professor at New York University. “I suspect that when the histories are written, this will be deemed the day the insurgency lost. Or at least began to lose.”

That may be true. But Russia’s behavior so far suggests that it will not stand by and watch the insurgency falter, regardless of how much evidence arises that its foot soldiers shot down that plane. Russian state television has already begun defending the rebels from blame, offering theories on the culpability of Ukraine’s armed forces. Once that message is chosen as the official line, the Kremlin will be wary of veering away from it. Many top officials have already locked themselves into a position, well before all the circumstances became clear. Sergei Naryshkin, the speaker of the Russian parliament and one of Putin’s oldest and closest allies, even accused Kiev of “criminal negligence” on Friday for allowing the Malaysia Airlines flight to pass over the region where “the Ukrainian army uses armored vehicles, heavy artillery, warplanes and launch rocket systems against their citizens.”

He made no mention of the fact that the rebels launch rockets as well, including the kind capable of taking down an airliner flying at more than 30,000 feet. Nor did Putin in his comments late on Thursday. “Obviously, the state over which this incident took place is responsible for this terrible tragedy,” Putin said.

The one-sidedness of the President’s response – his refusal even to suggest that the rebel leaders share part of the blame in the disaster – has given his critics a chance to lay the blame on him. Alexander Ryklin, a political commentator and vocal opponent of the Kremlin, wrote on Friday that “all of the political responsibility” lies on Putin’s shoulders. “He is the one who gave the orders to provide Russian technology and weapons to these mindless insurgents,” Ryklin wrote in an editorial on Friday. “And the result is clear.”

If the investigation into Thursday’s crash manages to prove that assertion in the coming weeks and months, the damage to Putin’s credibility at home and abroad would be enormous, and it is not clear what he has to gain from siding so clearly with the rebels this early in the investigation. Other than projecting a stubborn defiance in this conflict, and thus firming up his already sky-high support among hardliners in Russia, there is little obvious upside. So many Russia-watchers, particularly the investors who have a financial stake in Russia avoiding further sanctions, have held out hope that Putin will still shift to a more conciliatory line.

“Either the event will push Russia towards greater isolationism as a response to the broadly based global criticism,” said the Moscow-based investment adviser Chris Weafer, “or it will mark some sort of end, or the start of the end, of the most dangerous phase in the conflict in eastern Ukraine.”

Two days after the crash, that is still Putin’s choice to make. But from the signals the Kremlin is sending so far, it seems he has already made it. It would not only mean further isolation for Russia, it would also prolong or even deepen the most dangerous phase in its conflict with Ukraine. 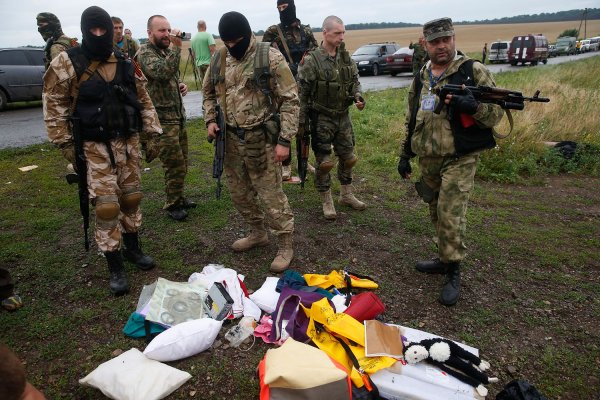 The Price of Inaction in Ukraine
Next Up: Editor's Pick