But late Friday afternoon, while talking about Karlijn Keijzer (pronounced Kar-line Kite-ser)–a former Indiana University rower who was killed on Malaysia Airlines Fight 17 on Thursday–Peterson reached his breaking point. She was 25. “One of my favorite memories that keeps popping into my head, and it makes me so sad to say this,” Peterson says, unable to continue his words. Between several pauses to let the tears pass, he explains why he can no longer hide his grief. It was such a small thing, really, but it meant so much.

After every season, Peterson conducts exit interviews with his athletes. Keijzer was from the Netherlands, and under NCAA rules was eligible to row only one year while she pursued her graduate studies in chemistry. Keijzer was a key recruit for Peterson, who was looking to draw more international athletes, with more experience, to help keep Indiana competitive in the Big Ten. Keijzer was a terrific fit. She had competed in prestigious events, like the European Rowing Junior Championships and the World Rowing Junior Championships. She had Olympic aspirations.

During that 2011 season, she helped transform the Indiana program, leading the Hoosiers to a 14-5 record. She rowed with the Varsity 8 – “the big cheese,” says Peterson – and sat in the “stroke” position. In rowing, the stroke sits closest to the coxswain, and is not unlike the boat’s quarterback. “The stroke sets the rhythm, the pace,” says Peterson. “The best rower sits in the stroke seat.” Peterson calls Keijzer one of the best rowers he’s ever coached, and he’s been at it for 30 years.

But during that exit interview that Peterson can’t bear to describe, Keijzer didn’t want to talk about her own performance. “She was just encouraging me, telling me, “Your on the right path, keep doing what you’re doing,” says Peterson. Smitten with Bloomington, Keijzer wound up staying on the IU campus, ditching a potential rowing career for the school’s PhD program in chemistry. So this season, she saw Peterson’s team make it all the way to the NCAA championships for the first time in school history. Peterson traces this success directly back to Keijzer’s boat, which made IU nationally relevant and helped bolster recruiting. “After we finally made it, she says ‘I told you you can do it,’” says Peterson. “She was just so ridiculously supportive.”

The Malaysia Flight 17 tragedy has already cost so much. In Keijzer, a senseless act cost of group of rowers a beloved teammate, her fellow chemistry students a popular colleague, and the world a scientist intent on fighting cancer and other diseases.

David Giedroc, professor and chair of Indiana’s chemistry department, remembers Keijzer walking into his office as soon as she got on campus. She asked if he would advise him. “Here was this confident young lady, passionate about science and sports,” says Giedroc. “High level science and high level NCAA sports – that’s a fairly exotic combination for a graduate student.” During her first year at IU, when she was both rowing and studying, Keijzer would sometimes fall asleep in her lab chair. Still, she somehow managed to make the 6:00 am practices.

“We’d be in the locker room at 5:30, it would be windy, rainy,” says Jaclyn Riedel, one of Keijzer’s teammates. “But she was kind of leading the charge, cheering everyone on. She was just infectious.”The Amsterdam girl took to Indiana, calling herself a “Dutch Hoosier.” To fit in, she came to one party dressed as an ear of corn. “She wore black spandex, a long yellow shirt with frayed edges, and her hair was green,” says Riedel. Her teammates would ask her for informal Dutch lessons, and when they found out the word for garden gnome – kabouter – a select few, including Keijzer and Riedel, started calling themselves “the kabouters.” They headed to Home Depot to pick up a few statuettes. The gnomes became good luck charms. Riedel would carry one in her backpack, “though it never went into the boat,” she says.

After wrapping up her rowing career, Keijzer kept pursuing her doctorate. “As a computational chemist, she had enormous potential,” says Giedroc. This summer, Keijzer was working in the Netherlands, collaborating with researchers at VU University Amsterdam on simulations of anti-tumor drugs. At IU, she was working on developing a computer program that calculates how anti-cancer molecules interacted with partner proteins that might play a role in cancer or Alzheimer’s disease.

“She was so passionate pharmacological chemistry, and helping people that way,” says Meghan McCormick, Keijzer’s lab mate for four years. “Cancer was just one obstacle she was tackling. She also took on a project seeking better HPV vaccines.” Keijzer and McCormick were co-authors on a study just published in the Journal of the American Chemistry Society, titled: “Understanding Intrinsically Irreversible, Non-Nernstian, Two-Electron Redox Processes: A Combined Experimental and Computational Study of the Electrochemical Activation of Platinum(IV) Antitumor Prodrugs.” McCormick offers the lay explanation: “Many second and third generation cancer drugs aren’t working as well as they could be. We think we can make better ones, based on the methodology and tools that we used.” “She was just a strong woman,” says McCormick. “As a woman in science, a woman in chemistry, she was a big inspiration. We always felt like we had to prove ourselves a little bit more, to fight through the biases. We fed off each other’s strengths.” McCormick starts tearing up. “It’s certainly going to take a very long time to walk into that lab, and not see her sitting next to me,” says McCormick. “I’m so used to seeing her smiling at me, drinking coffee, giving me encouragement.”

Keijzer was on the Malaysia Airways flight with her boyfriend, bound for a summer vacation in Indonesia before she returned to Indiana. Kuala Lumpur was a layover. When Peterson, her old coach, got word from a former rower on Thursday that Keijzer was most likely on the plane, he was in a car with his family, on his way to visiting a friend in northern Ohio. He didn’t want to believe it. When he saw the confirmation on Keijzer’s Facebook page, the devastation set in.

“She was such an optimist,” says Peterson. “Not just for herself, but for her team, and for everybody around her. She was always there, smiling, a best friend. That’s now all cut way too short. That’s what really makes me sad.” 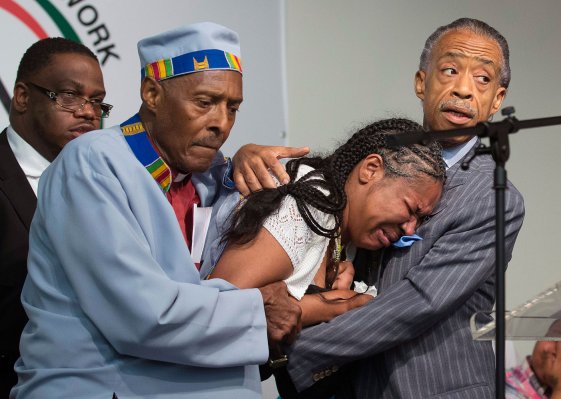 New York Man Dies After Police Try to Arrest Him
Next Up: Editor's Pick