Malaysia Airlines Ukraine Crash: A Working Theory of the Shootdown

The U.S. military’s top commander in Europe spoke last month at the Pentagon of Russians training pro-Russian separatists from Ukraine. “What we see in training on the east side of the border is big equipment, tanks, APCs [armored personnel carriers], anti-aircraft capability,” Air Force General Philip Breedlove said, referring to the Russian side of the Russian-Ukrainian border. “And now we see those capabilities being used on the west side of the border”—inside Ukraine.

“Anti-aircraft capability”? Did that mean that Russian separatists inside eastern Ukraine had shot down a Ukrainian helicopter a week earlier, killing nine?

“It’s a very good likelihood,” Breedlove responded, “but we haven’t tied the string directly together yet.”

There’s also no hard proof yet that Russian separatists inside eastern Ukraine downed Malaysia Airlines Flight 17 on Thursday, killing all 298 aboard. But there is a very good likelihood.

Russian and Ukrainian forces also have the kind of Buk missiles believed to have shot down MH17. A Russian press report said a Ukrainian Buk missile battery near Donetsk shot the airliner down. But the rebels have no air force, which makes one wonder what Ukrainian forces would have been aiming at (they have also failed to shoot at Russian aircraft that have crossed into Ukrainian airspace).

A pair of Russian batteries was just across the border. But it’s highly unlikely that a Russian unit went rogue.

Evidence is steadily mounting—training, equipment, purported post-shootdown telephone transcripts—that the separatists are responsible. While some elements may prove incorrect, the accumulating weight points at Russian separatists inside eastern Ukraine as the ones who fired the missile.

But that doesn’t absolve Moscow. If poorly-trained separatists fired the missile, it shows the dangerous game Russian president Vladimir Putin is playing. He and his nuclear-armed government have been fanning pro-Russian nationalistic fervor in eastern Ukraine, and providing them with weapons, intelligence and other support, U.S. officials say. Apparently, the rebels just got a little out of hand.

President Obama made clear Friday who he holds responsible, without saying so. “Over the last several weeks Russian-backed separatists have shot down a Ukrainian transport plane and a Ukrainian helicopter, and they claimed responsibility for shooting down a Ukrainian fighter jet,” he said. “Moreover, we know that these separatists have received a steady flow of support from Russia. This includes arms and training. It includes heavy weapons. And it includes anti-aircraft weapons.”

Pentagon officials believe MH17 was most likely shot down by a Buk Mk.2, which NATO calls an SA-11 Gadfly. Each SA-11 launch vehicle carries four 19-foot-long missiles atop a turntable that can hit targets at 60,000 feet. While the 35-year old design has been upgraded, it lacks some of the tracking capabilities of Russia’s newer systems.

“The SA-11, which is the one we believe was used to down Flight 17, is a sophisticated piece of technology,” Rear Admiral John Kirby, the Pentagon spokesman, said Friday. “It strains credulity to think that it could be used by separatists without at least some measure of Russian support and technical assistance.”

Whoever was operating the missile mistakenly believed that what turned up on their radar screen was a Ukrainian plane, U.S. defense officials theorize. In the past week, four Ukrainian aircraft have been shot down, including an Antonov AN-26 cargo plane flying at 21,000 feet on Monday. In two of those cases, the Ukrainian government believes the missiles involved were fired from inside Russia.

Russian media reported in June that pro-Russian separatists captured at least one Buk missile system. “The Donetsk resistance fighters have captured an anti-aircraft military station,” a Russian television network said three weeks ago. “The skies above Donetsk will now be protected by the BUK surface-to-air missile complex,” said the headline on the channel’s website.

There are plenty of military veterans in the region capable of operating the Buk system, U.S. officials believe, although the shoot down may have exposed just how little they really understood. That flaw—and the fact that the doomed airliner appears to have strayed north of the standard air corridor and ended up flying right over rebel-held territory—seems to have made the shootdown possible.

“Some separatists have received some training in these vehicle-borne systems,” Kirby said. “There’s no question about that.”

Yet they may not have been trained sufficiently. “The flight was transmitting its assigned transponder code corresponding with its flight plan, and flight tracking data was publicly available on the internet,” Samantha Power, the U.S. ambassador to the UN, told the Security Council Friday. “There was nothing threatening or provocative about MH17.”

But while a complete Buk missile battery consists of three vehicles—one carrying the missiles, one for the radar that guides them, and one for the missile commander—the missile-launching vehicle does have its own radar and can launch missiles by itself. If that happened, its crew of three or four may have been unable to, or never trained in, reviewing the airliner’s transponder data declaring their target to be a civilian airliner.

“Its built-in radar is normally used to track the target being engaged, but can be operated in a target-detection mode, allowing it to autonomously engage targets that were present in the radar’s forward field of view,” says IHS Jane’s Missile & Rockets editor Doug Richardson. “Although it has its own Identification Friend or Foe (IFF) system, this is only able to establish whether the target being tracked is a friendly aircraft. It is the electronic equivalent of a sentry calling out ‘Who goes there?’ If there is no reply, all you know is that it is not one of your own side’s combat aircraft. It would not give you a warning that you were tracking an airliner.” 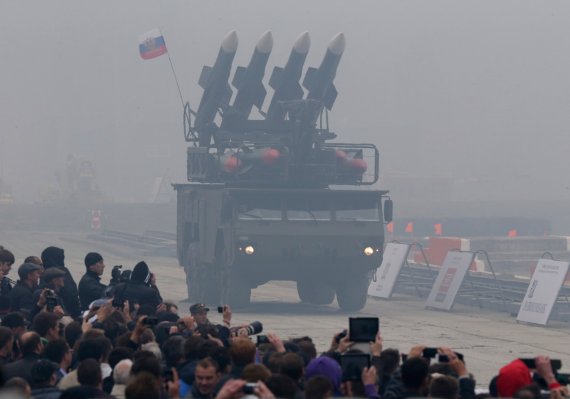 MH17: Errors and Fatal Decisions
Next Up: Editor's Pick