Ramadan, Day 22: A Prayer for Palestine

Palestinians inspect damage of an apartment building after it was hit by an Israeli missile strike in Gaza City, Friday, July 18, 2014.
Momen Faiz—NurPhoto/Corbis
By Sohaib N. Sultan

Throughout the last several days, my heart and mind have been overwhelmed thinking about the innocent lives lost and in harms way as Israel intensifies its military campaign in the Gaza Strip. I’m not a politician or a historian – I am just a simple human being who is aching, like millions of others, from all of the reports of death and mayhem that are emerging out of Palestine.

The tragic stories really hit home when journalists broke the story of four first-cousin children who were playing soccer near the beach when an Israeli missile dropped, killing the four children instantaneously. The photographs of the dead children and their frantic parents just broke my heart. I thought of all the children in my own life beginning with my nephew, and how terrible it must feel to lose them, especially in such a way. As of Friday, July 18, forty-five children have lost their lives in just this latest military campaign. I say not “Palestinian children” for children do not belong to anyone people; they are our collective hope for the future and God-given responsibility to protect. Forty-five precious and beautiful souls gone forever – may they rest in peace.

Israel will point the finger at Hamas arguing that they hide out in civilian areas and that the Israeli army has no other option but to accept mass casualties as part of “collateral damage.” Anyone who has seen a map of Gaza will wonder how innocent civilians and militants would live in clearly demarcated spaces in such a tiny land. Palestinians will argue that the Israeli army is targeting innocents and their operation amounts to nothing other than collective punishment.

What’s lost in the crossfire of words is the reality of suffering on the ground – the sheer pain of lives lost, limbs cut, hope fading, and anger building. It is a suffering that goes beyond the most recent military campaign, and is the day-to-day life under occupation.

In praying for Palestine and reflecting on their plight, I do not wish to undermine the suffering of Israelis who have also lost and also suffered and also experienced much pain over the last 64 years including the abduction and murder of three Israeli youth a few weeks ago.

My intention is just to consider and internalize for a moment – beginning with myself – the tragedy taking place before us. I would like to think that we can take a step back, take a deep breath, rediscover the well of tears that have run dry out of apathy, and lift our hands in prayer for those whose lives were cut too short by war.

“May innocent children, women, and men who are victims of our collective evil rest in peace as they return to the One who is all-loving, most kind. May they experience an eternal life of bliss where they will never again have to hear another explosion or experience another painful wound. May their loved ones who are left behind find the inner peace and fortitude to live on. May God forgive us for our evils here on earth and for our lack of compassion, courage, and wisdom in these times. May God grant us strength and patience and show us the enlightened way of forgiveness, reconciliation, and peaceful coexistence. Amen.” 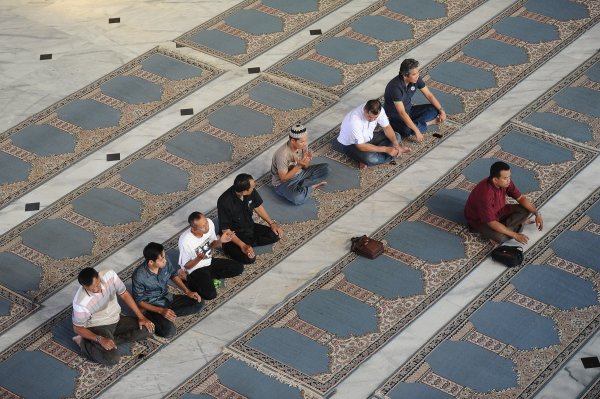 Ramadan, Day 21: Prayer, Beyond Ritual
Next Up: Editor's Pick