If you have decent credit and you actually read your junk mail, you’ll notice that credit card companies will do almost anything to turn you into a customer. The points or miles value of initial sign-up bonuses has climbed steadily and is at its highest ever with an average of 13,265, according to new data from CardHub.com. And on the cash back side, we’ve seen issuers roll out sign-up bonuses as high as $400 this year.

Sounds great, but the catch — you knew there’d be a catch, right? — is that once they’ve “wined and dined” you and you fill out that application, the honeymoon’s over. CardHub finds that the average earning rate for cash back rewards has fallen to an all-time low since it began tracking this data four years ago.

On the points and miles side, things look rosier. The base earning rate is still on an upward trajectory, although it’s lost a bit of steam over the past couple of quarters. There’s another variable here, though, which makes the idea that you’re getting more rewards for your spending a little misleading: Several of the major frequent-flier programs these cards are affiliated with have cut how much their points are worth by requiring a bigger cache of points to earn a free ticket.

It’s a change that has business travelers fuming, but the impact could be hitting your wallet, too. Even though it might look like you’re able to earn those points or miles faster, “It most likely might be making them less valuable overall,” says Odysseas Papadimitriou, CardHub’s founder and CEO. The trend towards less-valuable rewards that’s on display with cash back cards gives you a glimpse of card companies’ true intentions, Papadimitriou says. “Those offers have been deteriorating in value rather than appreciating,” he says.

On one hand, issuers are wooing people with fat sign-up rewards, while they cut the value of the regular rewards with the other. “It’s really so hard for them to get someone with excellent credit to change their credit card, so the initial bonuses are geared towards that,” Papadimitriou says.

The card companies count on the fact that we’re basically lazy and probably won’t go through the hassle of switching any automatic payments, finding a new card and canceling the one we have once we realize the regular rewards aren’t so hot. For cardholders who revolve a balance, this is a double-whammy, since reward cards almost always have higher APRs than cards that don’t offer rewards.

Once America finally wakes up and catches on to what’s happening, they’re not going to be happy, Papadimitriou predicts. Thanks to the Consumer Financial Protection Bureau, people today have a new venue to take their gripes about credit cards. CardHub’s research indicates that many are already doing so, finding that the volume of complaints about rewards skyrocketed by 45% in the second quarter of the year.

“Credit card companies really need to be careful with the devaluation game they’re playing. This strategy is going to backfire,” he says. “The last time they played that game, they got the CARD Act.” 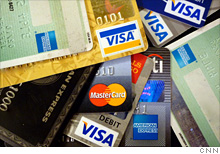 Do Not Leave Home Without These Credit Cards
Next Up: Editor's Pick