Putin: If MH17 Crashed in Ukraine, It's Ukraine's Fault

Russia's President Vladimir Putin talks to reporters during a meeting in Brasilia on July 16, 2014.
RIA Novosti / Reuters
By David Stout

During a meeting with his top economic advisers on Thursday, Russian President Vladimir Putin took the opportunity to argue that Malaysia Airlines Flight 17 would not have been downed had there not been civil war in Ukraine — a conflict he has repeatedly pinned on the central government in Kiev.

“I would like to note that this tragedy would not have occurred if there were peace in that country, or in any case, if hostilities had not resumed in southeast Ukraine,” Putin told his assembled advisers after observing a moment of silence for the flight’s passengers.

“And certainly, the government over whose territory it occurred is responsible for this terrible tragedy.”

Unconfirmed reports have swirled that MH17 was shot down by a surface-to-air missile fired by pro-Russian separatists based in southeastern Ukraine. Kiev has repeatedly accused Moscow of supporting the rebel forces.

Earlier on Thursday, Ukrainian President Petro Poroshenko said the downing of the aircraft was not “an incident or catastrophe,” but “a terrorist attack.” He called for a full-scale investigation into the airliner crash.

Relations between Moscow and Kiev have been on tenterhooks since Russian troops forcefully annexed the Crimean Peninsula from Ukraine in late March. The annexation was followed by a bitter insurgency against the Ukrainian government by well-armed pro-Russian separatist militias in the country’s east. 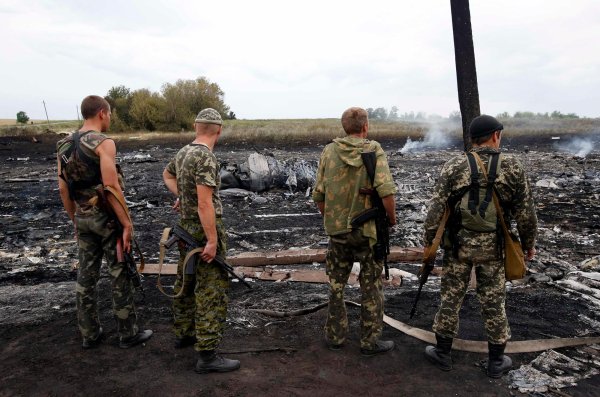 Did Rebels Shoot Down MH17?
Next Up: Editor's Pick