Anger, Agony and Disbelief as Malaysians Awake to News of MH17

An electronic board displays "Pray for MH17" at the departure hall of Kuala Lumpur International Airport on July 18, 2014
Joshua Paul—AP
By Yenni Kwok

“The Ukrainian authorities believe that the plane was shot down,” said Prime Minister Najib Razak in a statement. “At this early stage, however, Malaysia is unable to verify the cause of this tragedy. But we must — and we will — find out precisely what happened to this flight. No stone can be left unturned.”

There were 283 passengers and 15 crew aboard Flight 17. Of those, 154 people were from the Netherlands. There were also 27 from Australia, 43 from Malaysia (including the crew and two infants), 12 from Indonesia (including another infant) and others from Europe, the Philippines and Canada, according to a statement posted Thursday by Malaysia Airlines.

The Associated Press (AP) reports that distressed relatives have gathered at Kuala Lumpur International Airport to await news of family members. In between sobs, Akmar Mohamad Noor told AP that her older sister was on the flight, returning to Malaysia to celebrate Eid with the family for the first time in 30 years.

“She called me just before she boarded the plane and said, ‘See you soon,'” Akmar said.

There are reports that furious relatives waited for hours at the airport, unable to speak to officials from Malaysia Airlines and prevented from entering operational areas by security guards.

“We have been waiting for four hours. We found out the news from international media. The Facebook is more efficient than MAS,” one man said to waiting media.

Malaysian news outlet the Star gave blanket coverage to the crash Thursday morning, but, seeking a human dimension to the tragedy, most readers were drawn to a simple, poignant story on the worried messages left by colleagues on the Facebook page of cabin attendant Angeline Premila, believed to have been on the downed flight.

The Malaysian Insider reported on the extraordinary fate of cabin crew member Sanjid Singh, who reportedly swapped shifts so that he could be aboard Flight 17. Months earlier, his wife, also a Malaysia Airlines cabin crew member, had swapped out of the now vanished Flight 370 at the last minute, saving her life.

News site Astro Awani also carried news of the families of other crew members. Relatives of flight 17’s chief steward, Mohd. Ghaffar Abu Bakar, 54, said they heard the news on TV. The father of cabin attendant Nur Shazana Mohamed Salleh was unaware his daughter, 31, was aboard Flight 17 until informed by her friends late on Thursday evening. “She had asked us to send a photo of her nephew … She sounded cheerful,” he told journalists regarding his last communication with her on July 16.

Meanwhile, the Malaysian Twitterverse is abuzz with the news about the crash. “Following the uproar over the disappearance of MH 370, now [we are] shocked by MH17 that crashed in Ukraine. Oh God,” said @tracy_elcia, writing in Bahasa Malaysia.

Many users were in disbelief with the two successive tragedies that befall the country. “My dear God. The MH370 case is not finished, the MH17 case arrives. #PrayForMH17 #PrayForMH370,” said @apizshahh.

In the deeply religiously Muslim-majority country, some Twitter users turned to God for consolation. “Nightmare?? Only Allah knows what was happening.. #prayforMH17,” said @mohdzarulhiqmi. 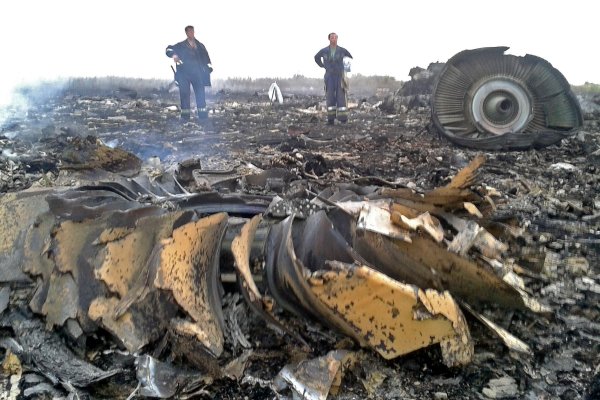 Malaysia Jet Down in Ukraine
Next Up: Editor's Pick