It’s looking increasingly likely that Malaysia Airlines Flight 17 was shot down over rebel-controlled eastern Ukraine Thursday by a Russian-built Buk missile, killing all 298 people on board. While that’s yet unconfirmed, U.S. officials, reviewing satellite data and other intelligence, believe a missile downed the airplane, and that pro-Russian separatists inside Ukraine are the most likely to have fired the killer shot.

We have seen this horror movie before.

It began with a Soviet warplane shooting down Korean Air Lines Flight 007 on September 1, 1983. The Soviets initially denied any involvement, but ultimately conceded one of its Su-15 interceptors had shot down the plane, killing all 269 aboard.

With KAL 007, errors piled atop one another to make a seeming impossibility distressingly real. KAL 007’s key error was an improper setting on its autopilot that caused it to stray off course and into Soviet airspace near the Kamchatka Peninsula.

Major Genadi Osipovich fired the R-8 missile that downed the plane without first telling his ground-based commanders that he saw the “two rows of windows” that indicated it was a Boeing 747. He compounded the plane’s error by not sharing that information. “I did not tell the ground that it was a Boeing-type plane,” he told a Russian reporter in 1991. “They did not ask me.”

Nearly five years later after the downing of KAL 007, the U.S. Navy shot down an Iranian airliner flying across the Persian Gulf. The crew of the guided-missile cruiser USS Vincennes incorrectly identified Iran Air Flight 655—an Airbus A300—for a much smaller Iranian-flown but U.S.-built F-14. The ship’s crew erred despite the fact that the plane was broadcasting its civilian identity and flying a regularly-scheduled flight on a regularly-scheduled route between the Iranian coastal city of Bandar Abbas and Dubai. All 290 aboard died in the July 3, 1988 shoot down shortly after takeoff for what was to have been a 28-minute flight.

Thursday’s shoot down, if that’s what it turns out to be, also had two key errors. The first was the decision to fly across eastern Ukraine, given the civil war roiling that part of the country. In recent days, Russian separatists have reportedly shot down four Ukrainian airplanes near the city of Donetsk. “The Donetsk resistance fighters have captured an anti-aircraft military station,” a Russian television network said three weeks ago. “The skies above Donetsk will now be protected by the BUK surface-to-air missile complex,” said the headline on the channel’s website. Following Thursday’s crash, many airlines changed flight routes to keep their aircraft away from Ukraine.

A total of 857 innocent people died in the three crashes.

How such accidents can be prevented depends on why they happened. If the Soviets truly believed KAL 007 was a spy plane masquerading as a civilian airliner, they still might have shot it down. The same series of mistakes made aboard the Vincennes might yield the same result today; no commander wants to be at the helm of the next USS Stark, which was attacked by Iraq in 1987, killing 37 sailors. And if Russian separatists fired the missile that downed MH17 thinking it was a Ukrainian aircraft, it’s tough to see how it might have been prevented.

Better training would help; more trust would help even more. Firing missiles is a lot like capital punishment. Mistakes can’t be undone.

What’s surprising about the tragedies (assuming Thursday’s was a shoot down) is that each was carried out by a military force—one in the air, one on the sea, and Thursday’s on land. While pro-Russia Ukrainian separatists may have downed MH17, it takes a fair amount of training—and a sophisticated missile system—to blow a commercial airliner flying at 33,000 feet out of the sky.

The U.S. and other nations have been worried for decades that portable, shoulder-fired missiles would end up in the hands of terrorists who would use them to down airliners. Surely, that remains a real concern. But sometimes, as we apparently learned again on Thursday, the wrong hands belong to bodies wearing military uniforms. 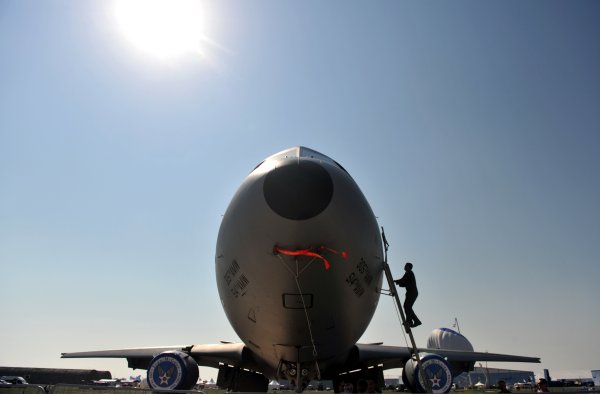 Protecting Airliners From Missile Attacks
Next Up: Editor's Pick