Patti LuPone and Elaine Stritch attend the final night of "At Home At The Carlyle: Elaine Stritch Singin' Sondheim...One Song At A Time" at the Cafe Carlyle on February 2, 2010 in New York City. Elaine also celebrated her 85th Birthday on the final performance of her cabaret show.
Jim Spellman—WireImage
By Patti LuPone

There was no one like Elaine Stritch and I doubt if there will ever be anyone again like Elaine Stritch. Whenever they say “old school,” you don’t really don’t know what that means, but she was the type of Broadway actress that they don’t make anymore.

The first time I actually met Elaine, it was maybe 20 years ago, and it was—where else?—in Sardi’s! It was all so cliché. There were a bunch of people in the business sitting around tables, and I think Elaine was sitting with Celeste Holm and one other person. Elaine all of a sudden said, “Patti! Come and sit with us!”

We worked together on 30 Rock, and one of my first appearances was a scene with Tina and Elaine and some other women. Elaine had great generosity towards her colleagues. And she again welcomed me into the environment of 30 Rock. Not that Tina didn’t! It was a great environment. But I come from the theater, as does Elaine, and she just motioned me over to come and sit with her, and we talked, and we did the scene.

The most personal recollection I have was Stephen Sondheim’s birthday with the New York Philharmonic in 2010, where everybody performed for Steve on the Avery Fisher Hall stage, and the director, Lonny Price, asked me to sing “Ladies Who Lunch” [Elaine’s signature song from Company]. I suppose if I hadn’t known Elaine, and if I hadn’t gotten a seal of approval from her as a human, it would have been more difficult. But I just thought it was such a gas that I would be singing her signature song at that event. I remember I said to Lonny, “Where’s Elaine? Where’s she sitting?” He said, “She’ll be the first person on the left.” So in the performance, when I said, “Does anyone still wear a hat?” I turned directly to Elaine, who of course, was wearing a hat! It took her totally by surprise. It was my tribute to her, as well as Steve.

My son recorded a message that she left for me on my answering machine afterward, which was a validation from Elaine to me—which my son has kept, so I’ll always have a piece of Elaine. So I’ll have something that makes me proud to be in the business and to have had validation by someone like Elaine.

I am very critical of what I see on Broadway, because I’ve seen greatness. Watching Elaine in At Liberty, was witnessing greatness. So she became the benchmark for whatever you see after that in solo shows. When you have that kind of history, that’s real, you are in the history of it—it’s a powerful thing.

As told to Sarah Begley. 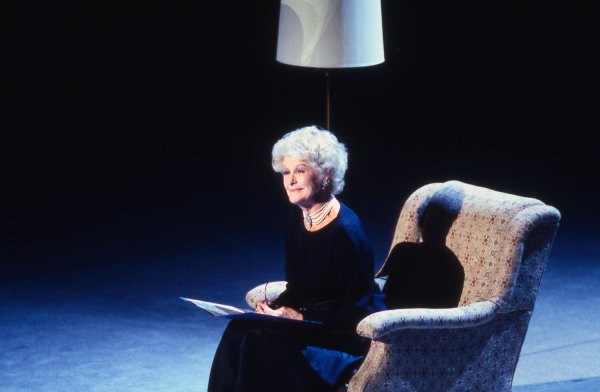 Elaine Stritch on Learning About Yourself: "They're Hard Lessons"
Next Up: Editor's Pick