Singapore Has Banned an Archie Comic for Depicting a Gay Wedding

In an installment of Life With Archie first published in 2012, the franchise tackled the issue of gay marriage head on — by putting it on the cover.
The Hollywood Reporter
By Nash Jenkins

State media censors in Singapore have banned the sale of an Archie comic book for its frank presentation of gay marriage, a matter that remains socially taboo and legally verboten in Southeast Asia’s most developed state.

Singapore’s Media Development Authority (MDA) censored the comic book, first published in January 2012, earlier this year, but the ban is only just now coming to light — a week after another state agency removed three children’s books promoting tolerance of same-sex relationships from the national library’s shelves.

The third installment in Archie: The Married Life, one of several spinoff series in the multifarious Archie universe, features the wedding of Kevin Keller, a gay character whose creation in 2010 earned writer Dan Parent a GLAAD Media Award last year. (In the latest volume, Archie dies taking a bullet for Kevin, now a U.S. Senator.)

As critic Alyssa Rosenberg noted Wednesday in The Washington Post, the 75-year-old comic book franchise has in recent years adopted a distinctly political subtext, taking on issues of topical significance as they come: Kevin, a gay solider, was introduced as the Obama administration was deliberating the end of Don’t Ask, Don’t Tell; Archie’s interracial marriage made the cover in 2012.

“[We]… found its content to be in breach of guidelines because of its depiction of the same sex marriage of two characters in the comic,” an MDA spokesperson said in a statement to TIME. “We thus informed the local distributor not to import or distribute the comic in retail outlets.”

In its guidelines for imported publications, the MDA prohibits comics and other illustrated material that depict or discuss “alternative lifestyles or deviant sexual practices,” listing homosexuality as an example of such (alongside “group sex and sadomasochism”).

Such stringent regulations are par for the course in Singapore, where social conservatism reigns supreme and strict curbs are placed on the dissemination of information. The country ranks 149th of the 179 countries listed in the 2013 Press Freedom Index — between Iraq and Vladimir Putin’s Russia — earning it the distinction of having the least free press of any developed economy in the world.

Concerning the recent purge of homosexual content, though, these restrictions may not be completely unwelcome. Sodomy, although rarely prosecuted, is criminalized as an act of “gross indecency,” and the majority of citizens, according to one survey, still take a “conservative approach” to marital and family matters. Indeed, the MDA claims to predicate its censorship decisions upon “public feedback or complaints,” and only turned its attention to the Archie comic after receiving a number of grievances. 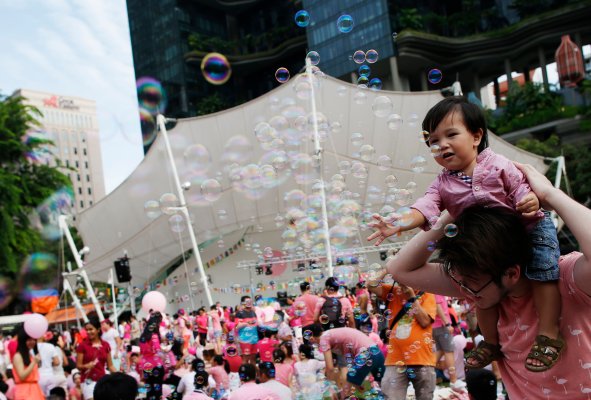