Five Species That Are Quietly Dying Off While Nobody Pays Attention

A slow loris in its cage at a sanctuary for the endangered animals, which have been confiscated from individuals or markets that illegally sell them as pets, on February 27, 2014 in Bogor, Indonesia.
Ed Wray—Getty Images
By Alexandra Andersson

Everyone knows that rhinos or pandas are threatened with extinction. But there are plenty of species slipping away silently, without celebrity advocates or high-profile campaigns. “So many species are just not popular enough, or well-known enough to share the spotlight with the world’s threatened megafauna,” says Chris Shepherd, director of conservation group Traffic South East Asia.

The problem is that while threats facing the icons of conservation — such as the gorilla or elephant — are wholly deserving of media attention, this leaves less page space and air time for scores of other, sometimes more endangered, species. And if there’s no public attention paid to them, funds don’t materialize and the impetus for legal protection is weakened.

The plight of the following five species is two-fold: their disappearance is happening fast, and it’s happening off-radar.

Population trend: A 50%-80% global population decline in the past 20 years according to the Seahorse Trust.

All 38 species of this shy creature are, like many species, facing threats on several fronts. They live in coastal waters, leaving them vulnerable to habitat loss from human development and indiscriminate trawling. There’s also a unsustainably high demand in traditional Chinese medicine for seahorses, which are used to alleviate kidney ailments and circulatory problems. According to the Seahorse Trust, 150 million seahorses are used in Chinese medicine each year. The home aquarium trade, the trust says, is responsible for another million or so annually.

Seahorses remain on the now ten-year-old Appendix II to the internationally recognized Convention on International Trade in Endangered Species of Wild Fauna and Flora (CITES) — a categorization that allows for regulated trade. But while 25 million seahorses are legally traded yearly, it’s estimated that further 125 million enter the black market. So far this year, Hong Kong customs have intercepted over 1,000 lbs of undeclared, smuggled dried seahorses, worth about $130,000. This level of capture and commercial trade is leading to a collapse in seahorse sightings. In 2011, the Centre of Marine Science at the University of Algarve, Portugal, reported a 85% reduction of long-snouted seahorses and 56% for other species that occur in the region.

“CITES listings should have all seahorse species down as highly endangered and at risk of extinction,” says Neil Garrick-Maidment, executive director of The Seahorse Trust. “There should, without a doubt, be a complete moratorium on seahorse fishing for 10 years.”

Population trend: The IUCN estimates that sun bears have decreased by 30% in the past 30 years.

Sun bears are traditionally found in much of Southeast Asia – from Bangladesh across to Yunnan, China and down to Borneo, Malaysia — but have become regionally extinct in much of the region, including Singapore and parts of China. The reason is a rapidly disappearing habitat, since vast swathes of lowland forest are being cleared – legally and not – for commercial monoculture cultivation, particularly palm oil.

In what forest remains to them, they are hunted by poachers who are after the bear’s paws and gall bladder, both of which fetch a high price on the black market – the former as a culinary delicacy, and the latter due to alleged medicinal properties when treating gall stones, inflammation, pain and liver troubles. “Numerous bears observed in bear bile farms, or on camera trap photos are missing limbs due to snares,” says Shepherd, who adds that China, South Korea, Vietnam and Malaysia are where demand is highest for bear bile.

Sun bears are listed in CITES Appendix I, which only permits regulated noncommercial trade (such as trade for scientific research, for example). But despite this degree of protection, “sun bears face tremendous pressures from illegal hunting and trade” according to Kanitha Krishnasamy, senior program officer, Traffic South East Asia. “Few people know of the threats this species faces, and fewer care,” adds Shepherd. “There are only a handful of people working to save the sun bear, all of them with inadequate amounts of funding, low levels of government support, and very little support from the public.”

Population trend: Decline in turtle and tortoise populations in Asia over the past decade has been so sharp it has a name: the Asian Turtle Crisis.

Distinct species of tortoises and freshwater turtles occur in low densities across the globe, each with characteristics adapted for specialized habitats. The Roti Island Snake-necked Turtle, for example, has a 20cm long neck and was endemic to Roti Island in Indonesia when it was discovered in the 90s. Now it’s critically endangered. Sadly, its story rings true for many of the 31 turtle and tortoise species now considered critically endangered by the IUCN, and there is one major cause – illegal trade in the creatures as pets and as food.

Although habitat loss and water pollution are a serious threat to these fascinating reptiles, it’s their meat and ornate shells that put them in real danger. As South East Asia becomes more affluent, the demand for these species has skyrocketed, On May 14, 230 Black Spotted Turtles were discovered by Thai Customs in unclaimed bags from Kolkata at Bangkok’s Suvanabhumi International Airport. Conservationists say that current levels of demand mean that many species do not have a hope of survival.

Population trend: Four of the five subspecies – found between Bangladesh and China, down to Indonesia and the Philippines – have experienced a 30% population decline in the past 25 years. The Javan slow loris, meanwhile, has declined by 80% over the same time period, and is considered critically endangered.

The decline in the populations of these lemur-like primates has traditionally been related to rampant habitat loss as the jungles are cleared or agriculture such as commercial cashew and palm oil plantations and rice paddies. This has forced slow lorises into gardens, settlements and farmlands, where it encounters a even greater threat to its survival: its desirability as a “cute,” exotic pet.

A quick YouTube search reveals many slow loris videos, many with several million views that have been a disastrously successful marketing tool, despite all species being listed under CITES Appendix 1 in 2007. Lorises are still routinely spotted in markets in Jakarta, Hanoi and Kuala Lumpur by conservation organisations such as Small Carnivore Conservation Project in Thailand, which saw lorises in a Jakarta market as recently as mid-June.

The underground trade in lorises is harmful on many levels. Individual lorises often cannot survive the stresses of capture and transport, where they are stuffed in boxes, sacks or suitcases and shipped as far as Russia, Japan and the United States. If they are to be sold, their venomous incisors must be pulled, resulting in infection and often death. They also do not fare well in captivity, and excessive handling, forced daytime activity and poor diet lead to high mortality rates.

Population trend: In Queensland, Australia, catch rates – a major population indicator – for dugongs in 1999 were just 3% of what they were in 1962, in an area that is considered a relative safe haven for the ‘sea cows’.

Dugongs have a traditional range spanning the waters of 48 countries and 140,000km of coastline – from the East African coast and Madagascar through the Middle East and Indian coasts down to Australia and Papua New Guinea. But they are now only found in relict populations, separated by large spans of ocean. Dugongs have been declared extinct in the waters of Taiwan, Mauritius and the Maldives, and studies indicate that in former ‘strongholds’ such as the Thai Andaman sea, Philippine archipelago and Sri Lanka, colonies of less than 100 individuals struggle to get by.

Dugong survival is hugely dependent on the availability of seagrass, and the fact is the species is suffering a chronic, and worsening, food shortage. Net entanglement, vessel traffic and socio-political impediments to conservation efforts also play a part, but it’s the pollution of coastal waters and consequent seagrass loss that is the biggest problem for these sensitive beasts. Trawling, mining, dredging, coastal clearing and land reclamation lead to an increase in sedimentation, smothering the seagrass of sunlight vital for its growth. Sewage, agricultural herbicide runoff and heavy metals also lead to a degradation in seagrasses, which can take over a decade to recover.

This, when considered in combination with their slow reproductive rates, spells disaster. Females give birth to just one calf at a time, with a two-to-seven year period between pregnancies. Lack of public awareness and pressure is a key restricting factor to dugong survival, according to UNEP: “for management to be effective, the general public has to be concerned about dugong conservation,” – a point that is vitally relevant to so many quietly disappearing species. 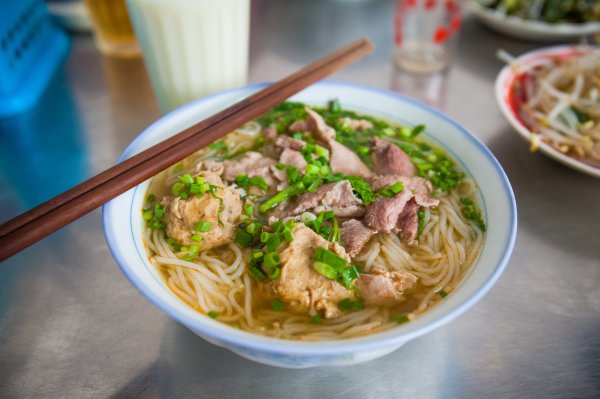 You'll Never Know Joy Like This Crab Chowing Down on a Plate of Noodles
Next Up: Editor's Pick