Customers gather at a medical-marijuana store on July 9, 2014.
Zachary Kaufman—AP
By Alex Altman

The House of Representatives on Wednesday passed one measure designed to help legitimate marijuana businesses gain access to the financial system, and rejected another that would have blocked them from doing so. But the votes may not force a resolution to the cannabis industry’s long-running fight to bank its cash.

The House easily approved an amendment to an appropriations bill that would bar regulators from punishing banks who transact with legal marijuana businesses. The measure, which passed 231-192, is designed to ease the fears of financial institutions, who mostly eschew pot clients, even in states that have relaxed marijuana laws, because the drug remains illegal under federal law.

In the other vote, the House rejected an amendment sponsored by a conservative Republican that would have blocked the implementation of Treasury Department guidelines, issued earlier this year, that gave a yellow light for banks to accept legitimate cannabis clients.

Industry activists hailed the votes as a major triumph. “This is a huge step forward for the legal cannabis industry,” Aaron Smith, executive director of the National Cannabis Industry Association, said in a statement. “Access to basic banking services is one of the most critical challenges facing legal cannabis businesses and the state agencies tasked with regulating them.”

Pro-pot votes in the Republican-controlled House are another marker of just how mainstream marijuana is becoming. But they are not necessarily a sign that the banking issue will be resolved anytime soon.

A bill to open the banking industry to pot clients would still have to clear the U.S. Senate, which is no easy feat for far less controversial legislation. There is no guarantee the measure will come up for a vote in the midst of a contentious election season, with control of the chamber up for grabs. And some legislators from both parties oppose opening the financial system to marijuana money. After the Treasury guidelines were issued, Sens. Dianne Feinstein (D-Calif.) and Charles Grassley (R-Iowa) co-authored a blistering letter arguing that the department had “severely undermined” its mission.

“Following the guidance may expose financial institutions to civil or criminal liability,” Feinstein and Grassley wrote. “Congress and the President may reconsider marijuana’s legality, but until federal law is changed, selling marijuana, laundering marijuana proceeds, and aiding and abetting those activities all remain illegal. Far from clarifying the obligations of financial institutions, FinCEN’s guidance appears to create uncertainty where none had existed beforehand.”

Multiple Democratic Senate aides did not immediately respond to questions about the measure’s chances of passage in the upper chamber. Without Congressional approval, banks are unlikely to take the risk of changing their policy. 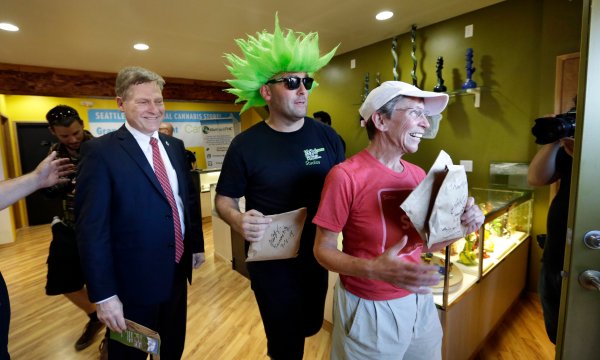