RCA
By Consequence of Sound

Having already looked at the very best of the “Weird Al” catalog, Consequence of Sound’s Matt Melis and Ben Kaye recently sat down with staff writer Henry Hauser to chat about the Weird one’s new record, Mandatory Fun.

Matt Melis (MM): For more than 30 years, “Weird Al” Yankovic albums have provided a nerdy, zany, irreverent excuse to throw a party. But the fascist, propaganda-inspired cover art, promotional “transmissions,” and title of Yankovic’s new album, Mandatory Fun, convey a far more uncompromising message: Join the party, or else! Yes, Big Brother Al is watching you, us, and apparently Lorde and Iggy Azalea, and hell hath no fury like a goose-stepping, polka-loving dictator who doesn’t get his state-mandated yuks. So, Henry and Ben, at the risk of life-threatening reprisal if you answer in the negative, did you have fun listening to Dear Leader’s latest album?

Henry Hauser (HH): While it’s no Bad Hair Day, I still found myself chuckling and snort-laughing throughout Al’s latest. Sure, Mandatory Fun is cheap, juvenile, and often downright grating, but damn if it isn’t good for a couple of laughs.

From Mr. Yankovic’s impassioned ode to the supremacy of aluminum over inferior forms of food preservation (“Foil”) to his biting satire of LA celebrity worship (“Lame Claim to Fame”) and adroit portrayal of creepy corporate evangelism (“Mission Statement”, a style parody reminiscent of Crosby, Stills & Nash’s “Suite: Judy Blue Eyes”), Al brings his A-game. He’s clearly got impeccable rhyming chops, spinning off lines like “Fungal rot, bacterial formation/ Microbes, enzymes, mold, and oxidation” on “Foil”, a delicious parody of “Royals” that could easily have made the cut on 1993’s The Food Album. Al even ventures back into the realm of meta-parody with polka medley “NOW That’s What I Call Polka!”, mocking almost 40% the Top 40 in just over four minutes.

But there’s also something slightly disturbing about the album. On more than one occasion, I actually forgot that I was listening to parodies. The prevalence of Auto-Tune, paper-thin lyrics, and re-re-re-recycled vocal melodies in pop music all blur the distinction between Al’s lampoons and the chart-topping drench that which “NOW…we call music.” Pop stars are scorching “Weird Al”’s terrain; at this rate, he’ll be parodying his own parodies.

Ben Kaye (BK): Did I have fun listening? Of course I did; it’s a “Weird Al” album! How could you not enjoy a record that includes a polka mash-up of pop smashes? That’s actually what makes critically listening to an Al album such a challenge: There’s really nothing to judge it against besides past efforts. So, I suppose the real question is how this new collection of parodies stacks up against those works, and from that perspective, it’s definitely a success. Mandatory Fun sits comfortably amongst the best of Al’s post-Bad Hair Day releases, and I do think that’s the benchmark at this point. Directly comparing the modern stuff to the material you heard as a kid isn’t fair to the newer works; they’re never going to have that nostalgia attached to them, and they’re not “time capsules” for at least five years.

But that’s looking at the big picture before tackling the individual parodies, so let me backtrack some. There’s a lot to make you smile here; the lethargic pace of Imagine Dragons’ “Radioactive” is perfect for “Inactive”, “NOW That’s What I Call Polka!” is as wonderfully titled as the tracklist is selected, and even “Tacky” (parodying Pharrell’s “Happy”) has its moments. The first half of “Foil” is great, and that bridge you mentioned, Henry, was the first time I audibly laughed. However, I keep wishing he’d stuck with the food humor instead of the weird switch to Illuminati jokes so it really could’ve been on The Food Album. Things like that make me struggle to find the parody that’s going to sweep the nation, though if there’s one song that could go viral, I’d point to “Word Crimes”. Maybe it’s the writer/English teacher in me, but I think this is the shining moment of the album. Part of that is definitely Pharrell, because even as a parody, “Blurred Lines” is catchy as hell. Still, Al’s lyrics are as sharp as ever here, and lines like “You should never/ Write words using numbers/ Unless you’re seven/Or your name is Prince” have kept me chuckling through multiple listens. And I’m so with him on homophones; I’ve been reading too many things lately that mix up “further” and “farther.”

MM: I’m not nearly as impressed by the new parodies. As Henry suggested, maybe the quality of the source material is problematic. Like Al once told Eminem in a fake AL TV interview, “Give me a break. I could only change the words. I couldn’t change the music, too.” Al’s just doing what he always does: parodying whatever we’ve hoisted atop a pop culture pedestal. How could he not try and tackle Lorde or Pharrell? But, there’s that fine line in parodies between funny and merely figuring out how to make something fit. Really, who’s going to get many laughs out of “Handy” apart from that nonexistent cross-section of Bob Vila and Iggy Azalea fans? Same goes for “Tacky”’s faux pas cataloging. Clever, sure. Funny? Not really.

“Word Crimes” absolutely tops the parodies. It’s a brilliant reminder that grammar and spelling still count in Al’s book, and, yes, Ben, love that Prince line, a subtle dig at the great purple one who has shot down Al’s parody requests for years. And how ambitious (and unexpected) was “Mission Statement”? It’s a George Carlin skit on the dilution of language set to CSN harmonies. The song sounds amazing, but I guess I’m wondering how often I’m going to want to hear all those corporate buzz words strung together. (I’m going to have “synergyyyyy…” in three-part harmony stuck in my head for a long while.) I guarantee this song becomes a widespread boardroom favorite at some point, though.

But let’s hear a little bit more about the non-parody cuts here. And what about the eight videos in eight days, which Al began releasing the day before the record’s release. Speculation? Any song you’re dying to see a video for?

BK: To clarify, I’m not 100% thrilled with the parodies either. “Tacky” only has moments, and I agree that “Handy” is weak, perhaps his weakest opening track since “Living with a Hernia”. Matt, you’re right that he has to play the hand the Top 40 deals, but he could’ve concocted a better topic there.

As for the non-parody stuff, “Sports Song” and “Jackson Park Express” are quintessential Al tracks. The former sounds ripped from Al TV, and the latter is another great execution of his rambling nonsense tales. I just love that he sticks to these tropes that, let’s face it, have never been what made him famous. I can just imagine summer camp kids turning “Sports Song” into a team cheer during color war. (If you know, you know.) But besides those two, “Lame Claim to Fame”, “My Own Eyes”, and “First World Problems” all rely too heavily on listicle-style humor for me. I know this is nothing new for Al, but the jokes don’t hit home as often with this trio of tracks. And I wanted to love “First World Problems” because the topic is so #IRL, but I just don’t feel it as much as “JPE”, which, to be fair, also goes the listing route, though at least there’s some level of storytelling.

I think it’s safe to guess that “Handy”, “Foil”, “Tacky”, and “Word Crimes” will all end up with videos, if for no other reason than the popularity of the original songs. I can’t wait for “Word Crimes”, obviously, and think the right clip could really give that some legs on the ‘Net. Some guy did a sort of brilliant Flash video for “Albuquerque” years ago, and I’d love to see something similar and official for “Jackson Park Express”. Is that too much wishful thinking, Henry?

HH: I’d be pretty interested to see how the video for “Mission Statement” turns out. Apparently, the song was inspired by all the executive meetings that Al’s endured over the course of his 30-plus-year career. Plus, the dogmatic feel of those corporate retreats jives really well with the album’s faux-fascist title and cover art. And, as we all know, synergy is a great way for Mr. Y to “advance [his] market share vis à vis a proven methodology.”

MM: Is the marching band-led “Sports Song” Al’s first sports-related song ever? As a recovering sports junkie, sober now for about five years, I couldn’t appreciate it more. It’s an instant classic from that opening line: “Your sports team is vastly inferior/ That simple fact is plainly obvious to see/ We’re going to kick your collective posterior.” Every college team needs to adopt this as its fight song immediately. Of course, this would lead to multiple homicides every weekend during football season.

On the nine-minute Cat Stevens strummer “Jackson Park Express”, Al relates one of the great love stories of our time. Granted, it takes place on a bus, the girl is totally oblivious, and the entire relationship consists of Al’s reading into a series of incidental, non-verbal gestures (e.g., “Then she let out a long sigh, which I took to mean/ Oh, Mama/ ‘What is that deodorant you’re wearing?/ It’s intoxicating!'”) Alas, no love can last forever, or in Al’s case, not even a bus ride. It’s nine minutes that never drags, draws numerous laughs, and showcases Al’s knack for delightful absurdity, spot-on style parodies, and even the type of subtle, observational wordplay you’d more likely find in a Flight of the Conchords song.

These moments render the title Mandatory Fun totally unnecessary. And I’m not just saying that because the eyes on this album cover seem to be following me across the room.

More from Consequence of Sound: The New Pornographers share new song/video “War on the East Coast” 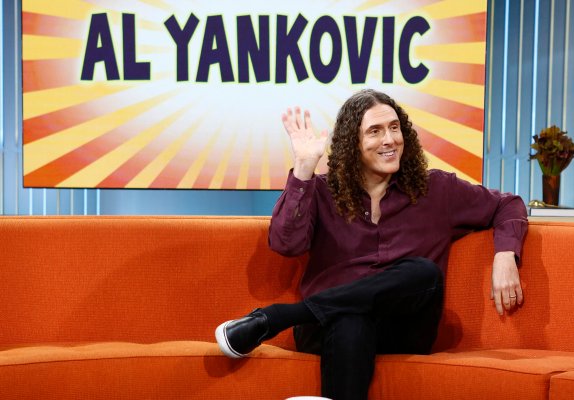 'Weird Al' Takes on Pharrell's 'Happy'
Next Up: Editor's Pick