Why Iran Believes the Militant Group ISIS Is an American Plot

A fighter of the Islamic State of Iraq and Greater Syria (ISIS) holds an ISIS flag and a weapon on a street in the city of Mosul, Iraq, on June 23, 2014
Reuters
By Aryn Baker / Tehran

Iran’s English-language daily newspaper, the Tehran Times, recently ran a front-page story describing the Islamic State of Iraq and Greater Syria’s (ISIS) June offensive in Iraq as part of a U.S.-backed plot to destabilize the region and protect Israel. The story was an English translation of a scoop by the state-run Islamic Republic News Agency (IRNA), which cited a purported interview with National Security Agency (NSA) leaker Edward Snowden.

According to the article, Snowden had described a joint U.S., British and Israeli effort to “create a terrorist organization capable of centralizing all extremist actions across the world.” The plan, according to IRNA, was code-named Beehive — or in other translations, Hornet’s Nest — and it was devised to protect Israel from security threats by diverting attention to the newly manufactured regional enemy: ISIS.

The IRNA story appears to build on, or may have even started, an Internet rumor that has assumed truthlike proportions through multiple reposts and links. No mention of a “hornet’s nest” plot can be found in Snowden’s leaked trove of U.S. intelligence documents, and even though Snowden has not publicly refuted the claim, it is safe to assume that the quoted interview never took place. (IRNA has been known to report stories from the satirical Onion newspaper as fact.) Yet Iranian government officials and independent analysts in Iran alike cited IRNA’s report as definitive proof of ISIS’s American and Israeli origins.

Back when former President Mahmoud Ahmadinejad was in power, it was not unusual to see IRNA echoing specious wild theories dreamed up by the leadership, but since the more moderate Hassan Rouhani assumed the presidency in August 2013, the security establishment’s nuttier fantasies of deranged plots against Iran have been largely reined in. That is, until ISIS spilled out of Syria and started setting up camp next door in Iraq, where Iran has tight ties with the Shi‘ite-dominated government in Baghdad.

Even before the Snowden scoop made the rounds of Iran’s media, military commanders, citing their own sources of intelligence, struck a similar theme. On June 18, Fars News Agency quoted Major General Hassan Firoozabadi, Chief of Staff of Iran’s armed forces, saying that ISIS “is an Israel[i] and America[n] movement for the creation of a secure border for the Zionists against the forces of resistance in the region.” That Iran’s media, along with its leaders, is focusing on ISIS’s supposed external backers — as opposed to its origins in local terrorist groups, al-Qaeda and popular discontent in both Syria and Iraq — demonstrates a concerted effort to streamline the national narrative in order to project power and preserve stability. As an example of another Western plot against Iran, ISIS can be managed — so goes Iran’s thinking. But as a new, potentially more destabilizing threat on Iran’s borders, ISIS poses challenges that the leadership is still struggling to understand and respond to. The only problem is that dismissing ISIS as a Zionist conspiracy could end up undermining Iran far more than any supposed American plot.

In its previous incarnation as an Iraqi al-Qaeda affiliate, ISIS has been responsible for thousands of Shi‘ite deaths in terrorist attacks since its formation in 2003. The group’s current success in Iraq — by some estimates it now controls a third of Iraq’s territory, including the city of Mosul — has as much to do with its considerable funding and military prowess as it does the weaknesses of the Iraqi state, led by Prime Minister Nouri al-Maliki, an Iranian-backed Shi‘ite who has alienated Iraq’s large Sunni minority. Now that ISIS leader Abu Bakr al-Baghdadi has declared himself the emir of a caliphate spanning the Syrian-Iraqi border, he continues to advocate violence against members of the Shi‘ite sect, whom he calls apostates, and has threatened to destroy Shi‘ite holy sites in an attempt to ignite an Islamic sectarian civil war. That would likely cause the Iranian-backed government in Baghdad to collapse, forcing Iran to send in troops and sparking a region-wide conflagration.

Yet Iranian government officials refuse to accept that there is a sectarian root to ISIS’s agenda, or that ISIS was able to advance in part because of Sunni discontent. When American leaders suggested that al-Maliki’s Shi‘ite chauvinism may have played a role in rallying Sunni support for the ISIS advance into Iraq, and suggested he step down, Iranians saw it as a direct threat to their influence. “When ISIS started advancing into Iraq, the first thing the Americans said was that Maliki should be changed,” says Hossein Shariatmadari, editor in chief of the government-owned conservative daily Kayhan. “Maliki was democratically elected, so what does he have to do with it? Nothing. The Americans wanted to cut the ties between Iran and Iraq.”

Instead Iran has declared the group a region-wide terrorist threat that funded and peopled by outsiders, including the U.S., Saudi Arabia and other Gulf monarchies. So far Iran says it has not gotten directly involved in Iraq, though it is prepared to do so if necessary. (Official statements aside, there is significant evidence of Iranian support in the form of military weaponry, assistance and training, if not troops on the ground.) But if Iran does take a hand in the battle against ISIS, it will do so in the name of fighting terrorism — and not for the cause of supporting its Shi‘ite ally in government.

That’s a canny move that could explain, in part, the government line, says a Western diplomat in Tehran. To go in with an overtly sectarian agenda would invite a regional backlash that could harm Iranian interests and threaten the state. “It is in the best interest of Iran to present this group as terrorists, because that way no one can accuse Iran of backing Shi‘ites against a Sunni movement,” says the diplomat.

But if Iran continues to back Maliki against the will of a disgruntled, powerful and armed Sunni minority in Iraq, it could still invoke a backlash all the same. Which might explain why the government line also plays up the American and Mossad angle a familiar trope. If it all collapses, Iran can still blame the West for the debacle, says the diplomat. “If Iran can convince its people that there is a plot against the country that must be countered, while at the same time providing a narrative of counterterror to the world, they are protecting their interests and hedging their bets at the same time.”

Why IRNA had to concoct something so obviously fictional as a fake Snowden interview to bolster the narrative is still unclear. Even Shariatmadari, editor of Kayhan, is mystified. “I thought this interview was strange too, because all this happened after Snowden had access to those documents,” he tells TIME. Nonetheless, he ran the story on his front page as well. 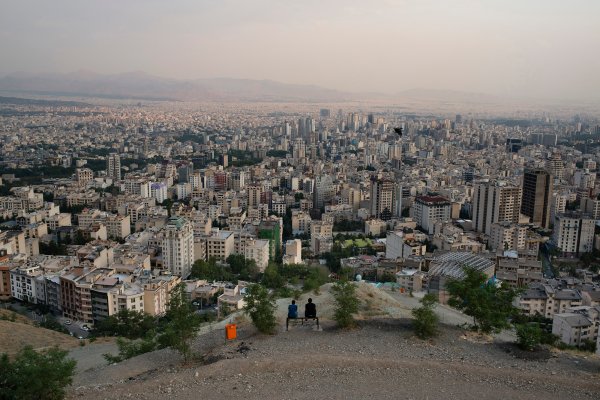 How Sanctions Darkened Tehran's Skies
Next Up: Editor's Pick