How Our Social Networks Impact Our Health

A new study says we may be genetically similar to our friends
Digital Vision.—Getty Images
By Alexandra Sifferlin

We might think we pick our pals based on who will best complement us—the old “opposite attracts” adage—but there may be something else at play. A new study published in the journal in the journal Proceedings of the National Academy of Sciences of the United States (PNAS) shows we are more genetically similar to our friends than to strangers. In fact, we’re about as genetically equivalent to our friends as we are our fourth cousins.

Though the latest findings were primarily reserved to a group of white people of European origin, the researchers say their findings suggest there is a genetic factor at play beyond physical appearance. Though the researchers say we only share about 1% of our genes with our friends, these underlying markers may make noteworthy patterns when it comes to who we decide to spend our time with, and could even influence our health.

These questions are central to the work of researchers, James Fowler, a professor of medical genetics and political science at the University of California, San Diego, and Dr. Nicholas Christakis, a social scientist at Yale University. The pair have been building a growing body of research about why we choose our friends, and what evolutionary benefits these choices might have.

“Sharing genes with friends appears to enhance your utility to them,” says Dr. Christakis. “Consider the hypothetical example of speech. If you evolve the capacity to speak, its use to you is greatly enhanced if you form ties with others who have evolved the same capacity.” On the other hand, the researchers found that we tend to hang out with people whose immune system make up is different from ours, which also makes genetic sense, since evolutionarily we don’t want to be susceptible to the same illnesses as our best friend or partner. We could pass it to each other, and then who takes care of who?

In the past, the researchers have looked at how social contagion can spread generosity and have reported thar people are more likely to light up a cigarette if their friends do. And in a 2007 study, the pair showed that friends can influence our weight more than genetics or family members, showing that when a study participant’s friend become obese, there was a 57% greater chance that the participant would also become obese too. They believe it’s not just that we share lifestyle behaviors with our friends, but that friends change our opinions on what we believe to be appropriate social behavior. Conversely, friends could also help us stay on a weight loss plan for the same reasons. The researchers also show that social networks could also have the potential to predict epidemics given that most are set up in a similar way, where certain people are more connected and popular than others, and subsequently more likely to come in contact with disease.

In earlier studies on friendship and genetics, Christakis and Fowler suggested that genetics can influence social behavior in networks of friends, even impacting whatever predispositions those friends already have. For example, if someone is genetically predisposed to alcoholism, and they end up associating with people of similar genotypes who are more likely to have alcohol available, that could be a problem for them. But on the other hand, if that same person chooses a group of friends with a different make-up, alcohol may not be frequently present, and their predisposition remains un-triggered.

That means friendships might modify the way our own genes are expressed, the authors propose. Meaning human evolution is not just limited to the influence of physical and biological environments, but social ones as well. 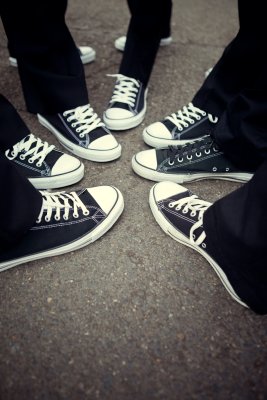