Just days after Mitt Romney’s rout in 2012, Louisiana Gov. Bobby Jindal declared that it was time for the GOP to “stop being the stupid party.” Twenty months later, Jindal is hard at work trying to make that the case.

The boyish-looking 43-year-old Republican is closing in on a decision whether to run for the White House in 2016, but first he is criss-crossing the country fundraising for GOP candidates and for his policy organization, America Next. The group has already outlined his proposals to repeal and replace Obamacare, with future plans on education reform and energy policy coming in the coming months.

In a Republican Party divided over tactics and policy, Jindal is trying to carve out a niche as the wonkiest candidate. On the stump at a fundraiser for Tennessee State Sen. Jack Johnson Sunday, Jindal reiterated his calls for the GOP to offer up policy alternatives, not just objections, delivering a thinly-veiled critique of New Jersey Gov. Chris Christie.

Dressed casually in jeans and a button down shirt, with an oversized New Orleans Saints belt buckle, Jindal appears unassuming sitting on a sofa backstage before the event. But then he starts talking. And fast. 180-words-per-minute fast, his much-maligned 2009 response to Obama’s first speech to a joint session of Congress notwithstanding. He touches on policy areas like education and immigration, healthcare and the Middle East.

He jokes that his father, an immigrant from India had an accent. “This is not an accent by the way,” he says in his thick Cajun drawl, drawing a laugh from the 500 or so attendees at the ‘Boots & Jeans, BBQ & Beans’ event. “This is how regular people talk.”

“You know we can get rid of debt, we can get rid of those taxes, those regulations, and the incompetence with a new majority and a new administration in DC,” he continues. “But the thing that worries me the most is this president’s relentless attempts to redefine the American dream.”

TIME caught up with Jindal in Franklin, Tenn. Sunday afternoon, where he was attending the fundraiser and meeting with donors for America Next to discuss his tenure and future aspirations.

The following exchange has been edited and condensed.

Vice President Joe Biden told the nation’s governors on Friday that the nation is looking to them to lead the country out of the current era of hyper-partisanship. What was your reaction to that?

I think there’s deep, deep frustration with D.C., and not just in the Republican party but across the country in the Democratic party as well. I think there’s a sense that the real divide is not Democrats versus Republicans, but it’s between D.C. and the rest of the country. I think ironically president Obama tapped into that in 2008. When he was running, when he talked about changing the culture in D.C. He talked about bridging the partisan divides. And I think there were a lot of voters who voted for him thinking he was being less ideological, he was being more competent, he wasn’t going to be hyperpartisan, and they are deeply disappointed.

Do you think that Republicans who say the party needs to stop trying to repeal Obamacare are leading the GOP astray?

Look, I personally think we have got to repeal it. I think we’ve got to replace it. I think we have to rip it out at the roots. And I think it is awful in terms of the effects you’re seeing. It was passed because of a bunch of lies. . . . I think as Republicans, yes we need to be consistent on repeal, but have to be very specific about what we are replacing it with. And I do think we do ourselves a disservice is all we say is we’re repealing it and not saying this is what comes next. The more people experience it, the less they like it. But they want to know what’s the alternative, they want to know, all right I know this isn’t working but what are you going to do. And that’s why we put our plans, our ideas forward. And I think it’s incumbent upon Republicans to do the same.

Eighteen months ago you warned the GOP against remaining the “stupid party.” Where does that stand now?

Three things: One I think we’ve made progress, but there is more work to be done. Second, I think it’s important we continue to be specific about our policy proposals. My third point is this: My big concern for our party is that in 2014 the temptation’s going to be—listen, I think Republicans are going to have a big year this year. All the trends seem to suggest that. And I think that we can take away the wrong lesson. My worry is that there are a lot of consultants in DC who are running around saying just run against Obamacare. It’s very unpopular, be against a president whose poll numbers are falling, and don’t give them anything to shoot at. That may or may not work in the short term, but there are two problems with that. One, that’s no way to govern. We have to earn the right to be the majority party for the long term. And second, if as conservatives we really think these are dangerous times for our country, if we really believe that, we need to be in the business of persuading people, trying to change the direction of government, getting the country back on track. And you can’t do that unless you are willing to put out specific ideas.

You’ve made education reform a signature issue in Louisiana, as have other Republicans on the national level. Do you think the issue is a political opportunity for the GOP?

I think it’s a huge issue for conservatives. And I say this seriously. I don’t think this should be a partisan issue. I think it’s an American issue. . . . The left has abandoned a lot of these kids and their families and they really don’t have much to say to them. You can’t tell them to just wait, because their kids only grow up once. Incremental progress isn’t enough. And what you’re seeing is you’re seeing amazing progress in a really short period of time. So for example in charter schools in New Orleans, in five years they have doubled the percentage of kids who are reading at grade level. This isn’t just theory—you can show dramatic progress quickly for folks. So I think it is the right issue substantively, so that’s the reason I think pursuing it shouldn’t just be a partisan issue. But secondly, certainly there are political benefits to Republicans, sure, and I think it’s a great example of how we can be consistent with our principles and speak to every voter.

What do you make of the surge of unaccompanied minors crossing the southern border?

I think the president has played a role in helping to create the crisis we see on the southern border. It’s time for him to secure the border. I know he keeps looking for people to blame. He has to look in the mirror. The reality of it is this, we don’t need 1,000-page bills, right now we need to secure the border. As conservatives we talk a lot about this being the most ideological, the most liberal president. But I think the public’s also seeing an incompetent administration as well. We’ve seen that with the VA, we’ve seen that, I believe, with the release of the five prisoners from Gitmo. I think you see that with the border situation. I think you’ve seen that with the IRS. You’ve seen that example in case after case.

It’s time for him to secure the border, but I think this is also telling in that it goes to the competence of the administration. And I think that’s something that we’ve seen in Louisiana for a while. We saw it especially during the oil spill, the explosion in 2010. We saw the incompetence there. I think the rest of the country is seeing what we saw back then.

What’s the latest on your 2016 thinking? 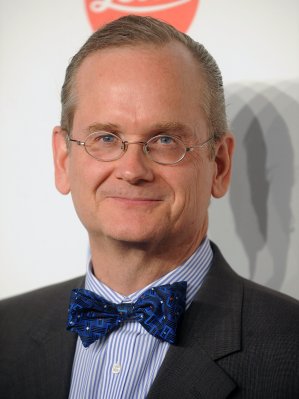 Lawrence Lessig on His Super PAC to End Super PACs
Next Up: Editor's Pick