The Tricky Gimmick Congress Will Use to Fund Your Highways

On Monday night the White House endorsed the House Republicans’ plan to keep the Highway Trust Fund—which finances highways, roads and bridges—alive for the next 10 months, saving about 700,000 jobs. While the bill will bring the Transportation Department program back from the brink of a crisis, it uses an accounting trick known as “pension smoothing” to pay for it. Here’s a guide on why the short-term revenue raiser is no good for the long haul.

What is pension smoothing and why should I care about it?

Pension smoothing raises money for the government in the short term in exchange for increasing the debt over the long term. By reducing pension contribution requirements, pension smoothing temporarily increases companies’ taxable income to raise revenue for the government. But over the long-term, companies will be on the hook to contribute more to their pension funds, lowering tax revenue. Some conservatives, including fellows at the Heritage Foundation and Keith Hennessy, a senior White House economic advisor under President George W. Bush, have warned that pension smoothing increases the risk of a taxpayer funded bailout of the Pension Benefit Guaranty Corporation, the government insurance company that protects pensioners from risk in their private plans.

Congress in the past has turned to the tactic in dire situations (see next question) because it is pro-employer and a revenue raiser in the short-term. Since the Congressional Budget Office scores bills in 10-year windows, supporters of the House and Senate bills to save the Highway Trust Fund can avoid questions about raising deficits in the long-term.

It’s no one’s ideal revenue raiser. Sen. Orrin Hatch of Utah, the top Republican on the Finance Committee, told TIME last week he’s “not real happy about pension smoothing,” but still “dedicated” to passing this year’s fix. On Tuesday, reporters asked House Speaker Boehner at a press conference why he would support pension smoothing, which Republicans decried earlier this year as a gimmick when Democrats wanted to use it to fund an emergency unemployment insurance extension.

“These are difficult decisions in difficult times in an election year,” said Boehner. “It is a solid piece of legislation that will solve the problem in the short-term. The long-term problem is still there and needs to be addressed.”

Several outside think tanks and media organizations have announced their opposition to pension smoothing, including the left-leaning Center on Budget and Policy Priorities, the editorial board of the Washington Post, the bipartisan Committee for a Responsible Federal Budget and the conservative Heritage Foundation.

Has pension smoothing been used before?

In 2012, Congress first turned to the revenue-raising gimmick to fill another transportation funding shortfall. Last year, Sen. Susan Collins (R-Maine) included it as part of a failed proposal to repeal an Obamacare provision and end the government shutdown. Earlier this year, Senate Democrats and a handful of Republicans tried to use it to extend unemployment insurance. Now it will be used to save the Highway Trust Fund from insolvency.

What are the alternatives?

A month ago, Sens. Chris Murphy (D-Conn.) and Bob Corker (R-Tenn.) introduced a bill to raise the federal gas tax (currently around 18 cents a gallon), which hasn’t been changed since 1993 and is the main source of financing the Highway Trust Fund. The Corker-Murphy bill would address the cash-strapped program by increasing the tax by 6 cents in each of the next two years and then index the rate to inflation. Besides the Corker-Murphy bill, Congress could tax drivers on how many miles they drive and communities could set up more tollbooths. Other potential long-term solutions are in the works but unlikely to pass this year. 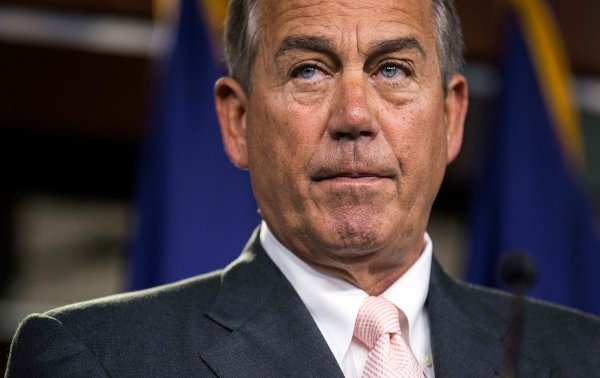 Boehner: House Will Sue President Over Obamacare
Next Up: Editor's Pick