Western Families Struggle With Loss of Relatives to Jihad

Abubaker Deghayes at home in Saltdean, United Kingdom, mourning the death of his son Abdullah, 18, who was killed in Syria after he volunteered with some of his brothers, to fight alongside the rebels in the civil war.
Andy Hall
By Mirren Gidda

Two British men admitted last week to preparing acts of terrorism, after returning from fighting with jihadist militants in Syria. Mohammed Nahin Ahmed and Yusuf Zubair Sarwar, both 22, had been fighting with rebel groups in the country for eight months but were arrested as soon as they set foot back in the U.K.

Intelligence officers, who had been investigating both men for months and amassing significant evidence against them, were first alerted to their whereabouts not by deep embedded sources or intelligence analysts in the field, but by Sarwar’s parents, who acted to protect their son in one of the only ways they had left.

Sarwar’s family is hardly an outlier. Some 12,000 foreign fighters from 81 nations are estimated to have entered Syria over the past three years. Faced with such staggering numbers, intelligence services are increasingly relying on the fighters’ families to supply them with information, who face the agonizing decision of whether to betray a loved one. But how else can you protect your relatives when they’re fighting for groups whose sole purpose is to kill or be killed?

Some families refuse to call the police, instead traveling to the Turkish-Syrian border to beg their relatives to come home. Others contact law-enforcement authorities in the hope they can somehow extract their family member from danger. Many others simply never hear from their loved ones again.

When Amer Deghayes, 20, traveled to Syria with an aid convoy in November 2013, his father Abubaker thought he’d be working in the Atma refugee camp in the north of the country. A few weeks later, Deghayes heard from his son. He’d joined al-Nusra Front, an affiliate of al-Qaeda.

Struggling with his son’s news, Deghayes was dealt another blow when sons Jafer, 16, and Abdullah, 18, followed their brother at the end of January. “I realized they’d gone on the second day when I saw their passports were missing,” he says. Deghayes traveled to the Turkish border to persuade them to come home, but they refused.

In an April firefight, Amer was shot in the stomach and Abdullah was killed. His father learned of his death on Facebook.

Deghayes, who considers Abdullah a martyr, believes the West bears some responsibility for his son’s death. “Why didn’t the West do something before these organizations popped up like mushrooms? They have the capability to stop this war like they did in Libya … Syria would move the emotions of any Muslim, or anyone who is human.”

That may be why Deghayes refuses to censure his sons Amer and Jafer, who are still fighting in Syria. “They want to help the Syrian people and join the fight against Assad,” he explains. “There are always people who get attracted to what they think is a just cause.”

The boys are nephews of Omar Deghayes, a U.K. resident who was held as an enemy combatant at Guantánamo Bay between 2002 and 2007 before being released without charge.

Some would-be martyrs go to Syria from across the Atlantic. The mother of a Canadian jihadist who calls himself Abu Muhajir spoke exclusively to TIME from Windsor, Ontario, on condition of anonymity, about her son’s departure to Syria.

The man, whose real name is known to TIME, told the New York Times in May that he was a high school science teacher, raised in a religious family in North America, who had decided to wage jihad in Syria with Islamist groups. His mother gives an alternative take of his background.

“We don’t go to mosque, a few times only,” she says. “Before Syria, my son went to Egypt to study Arabic. The Canadian intelligence services got him at the airport and questioned him. They were always after him and interviewed him many times.”

Aware that her son was becoming more secretive, Muhajir’s mother tried to stop the inevitable. “The Canadian police asked for information about my son, they told me to tell them if I saw any changes.”

Then one Sunday in November, Muhajir said he was going to Niagara Falls with a friend. Suspicious, his mother called the authorities. But the police didn’t respond, and intelligence services said they would deal with it on Monday. By the following day, however, her son and his friend had gone. “They let him go,” she says.

Like Deghayes, she speaks to her son regularly online. Audibly upset, she doesn’t know where her son is or whom he is with. “He doesn’t share these things with me because he knows I’m against it,” she says. “I am crying for my son, I am praying for him.”

When TIME contacted Muhajir, he refused to respond to news of his mother’s grief, though he claimed, “Any mother would be upset. But mine isn’t upset”.

“Whenever I ask him how he is, he just says ‘alhamdulillah [praise God],’” says his mother. “He said, ‘Mom I want to stop that oppression because it’s un-Islamic.’” Muhajir has also told his mother he’s working in a humanitarian team and not to worry, she says.

For his mother though, that is easier said than done. “I used to go to al-Jazeera [to read about Syria]. The miserable things I saw, I was always crying and it impacted my health … I am a mother and I have a mother’s heart.”

Her son’s travel companion eventually returned from Syria, dragged back by his wife. In her community, where neighbors fear police monitoring if they’re seen to be sympathetic, Muhajir’s mother is now alone in her grief.

This is not the case in Minnesota, whose Somali population has seen 15 of its young men leave for jihad. In June, Minnesota Public Radio spoke to a Somali-American man who called himself Abdirahmaan Muhumed who had left the Twin Cities for Syria. His brother Abdirahman Ahmed, who has been estranged from his sibling for 10 years, told TIME that his brother’s real name is Abdifatah Ahmed.

Though he spoke to Minnesota Public Radio, Ahmed hasn’t been in contact with his family since he left for Syria in December 2013. They don’t know where he is or whom he’s with, said his niece, who spoke exclusively to TIME on condition of anonymity. “I’ve tried to contact him, but there’s no answer,” she says. “I feel really upset, like I’ve lost my best friend. I was the closest to him and used to see him every day.”

Fiercely protective of her uncle, she declares, “I believe that he’s doing the right thing. I’m supporting him with whatever he decides as long as he’s O.K. He’s always been a believer. I feel like he’s trying to prove a point by fighting for what he believes in.”

Ahmed was one of the first Somali Minnesotans to go. At the end of May, Abdi Mohamud Nur left Burnsville, Minn., for Syria along with 12 other men. He graduated high school only one year before. His elder sister, Ifrah Mohamud Nur, told TIME that she has had no news of her brother’s whereabouts.

Nur believes her brother is fighting chiefly because he has been led astray. In a Facebook status posted shortly after he left, she wrote, “It’s still so unreal that my brother could leave us all behind for what? May Allah … punish these so called Muslims sending young boys to do their dirty work.”

Angry and distraught at her brother leaving home to fight on a foreign battlefield, Nur suggests challenging extremists who might ensnare young minds. “We as a community have to stand up to these [people] or else it’s gonna keep on happening,” she wrote. 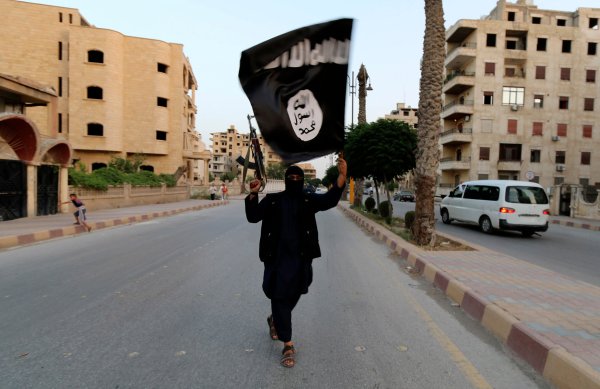 Most Syrians Are Opposed to an Islamic Caliphate
Next Up: Editor's Pick