Lightning did not strike at the Farnborough International Air Show on Monday.

Farnborough’s star attraction—the F-35 Lightning II, a fifth-generation fighter jet also known as the Joint Strike Fighter—was due to make its international air show debut this month. Unfortunately for both the air show organizers and F-35 developers, the fighter jet failed to make its scheduled appearance at Farnborough, in Hampshire, England, after the entire F-35 fleet was grounded in the U.S. last month after the engine on one of the jet’s caught fire.

Yet Farnborough organizers, Lockheed Martin (which manufactures the jet), and the U.S. military are all hopeful the F-35 will still be able to make an appearance. Farnborough announced the fighter jet would be missing the show’s opening on July 13 in a statement, saying, “The aircraft is still awaiting US [Department of Defense] clearance but we are hopeful that it will fly at the air show by the end of the week.”

“Everyone involved in the project is working towards a positive result for attendance at the air show [later] this week,” the statement added.

The fire took place on June 23, in a single jet’s Pratt & Whitney engine at the Eglin Air Force base in Florida. No one was harmed, but the fire prompted the Pentagon to ground the entire fleet of jets until the matter had been investigated. The fire was caused by excessive rubbing of fan blades in the engine, according to F-35 developers and Lockheed executives, who held a news conference at Farnborough on Monday. The fire is also believed to be an isolated incident.

“There’s a growing body of evidence that this is not a systemic problem,” said the Under Secretary of Defense for Acquisition, Technology and Logistics, Frank Kendall, while also emphasizing the need to conduct a thorough investigation and put “safety first.”

Yet the failure to make the much-hyped appearance at the opening of the air show—while also missing appearances earlier this month at the naming ceremony of HMS Queen Elizabeth, in Scotland, and the Royal International Air Tattoo show in Fairford, England—is another blow to the F-35 program, which has come under fire for being both overdue and over-budget. The F-35 is a major project for the American military, with three variants of the jet being developed for the Air Force, Navy and Marine Corps. And with estimated development costs of almost $400 billion, the F-35 is also the most expensive weapon ever built.

As the Farnborough International Air Show marks one of the world’s biggest aviation events of the year—where industry experts, buyers and aviation fans all gather—the F-35’s absence is bound to be noted by potential customers. (Foreign buyers of the aircraft already include Italy, Canada, Australia, Turkey, Israel, Norway, Japan, and the Netherlands.) In particular, the U.K. is a major customer for the fighter jet, but the New York Times reports that the country, which originally said it would buy 138 jets, has only committed to purchasing 48 so far.

And if the F-35 fails to appear at all before the Farnborough Air Show draws to an end on Sunday? “It’s not ideal,” said Richard Aboulafia, an aviation analyst who works for the Teal Group. “This could delay efforts to ramp up production.”

But Air Force Lt. Gen. Chris Bogdan, the Program Executive Officer for the F-35 Lightning II Joint Program Office, insisted Monday that a cancellation wouldn’t be “a setback to the program.”

“It would have been wonderful for the rest of the world to see it’s not just a paper airplane. It’s a technological marvel,” he said, before adding that the jets were ready to fly across the Atlantic to Farnborough as soon as they were given clearance. “We’re not giving up yet.” 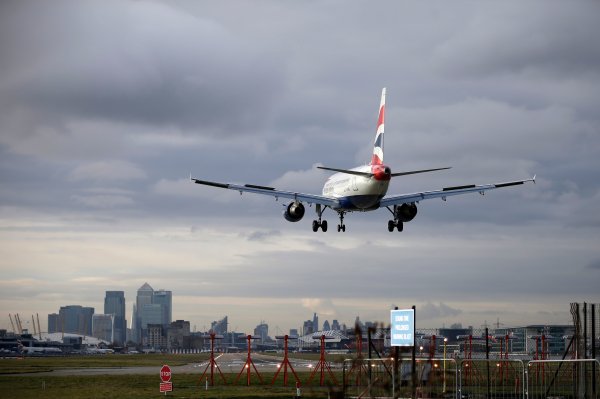 Assume the Brace Position: The Dead Phone Flying Ban Has Begun
Next Up: Editor's Pick