Is Shinzo Abe's Notion of 'Womenomics' Just a Pipe Dream in Sexist Japan?

On a recent state visit to Australia, Prime Minister Shinzo Abe spoke of his plans to lift Japan from its economic doldrums and of the role women will play in that rejuvenation.

“Women have the greatest potential,” he told the business publication Nikkei, “and allowing them to demonstrate their full abilities is the core of our growth strategy.”

It wasn’t the first time Abe invoked gender equality in his developmental rhetoric. In September last year, he wrote an op-ed for the Wall Street Journal, in which he extolled the virtues of “womenomics”: “A country that hires and promotes more women grows economically.” Soon after the piece ran, Abe declared to the U.N. General Assembly his intention to “create a society in which women shine.”

The Abe government’s intent to rectify Japan’s gender imbalance is a key component in what has been dubbed Abenomics, a series of initiatives to prop up growth in the country. The first two “arrows” of the program have garnered praise among market watchers, who attribute low unemployment levels and a favorable exchange rate to aggressive fiscal stimulus and monetary easing. The third arrow, however, which aims at structural reforms to bolster Japan’s competitiveness, centers on the much more difficult task of overhauling a largely male-centric business culture.

“I used to be one of those people who would roll their eye at cries of sexism, and feminists terrified me,” says Mona Nomura, a Japanese woman raised in the U.S. “But moving to Japan has changed all of that.” Nomura, who works for an e-commerce company, says she has had an executive walk out of a meeting with her at the office, unhappy with her questions. She’s also been told to “go back to the U.S.,” where independent women are more welcome, by Japanese male acquaintances.

The numbers certainly paint a picture of a system less than inviting to women. On average, female workers earn 30.2% less than their male counterparts, and, according to 2012 data from the Ministry of Health, Labor and Welfare, women only occupied 11% of managerial positions in the private sector.

It’s a similar scenario of inequality in politics. Government estimates in 2011 noted that women took up just 0.8% of town and village mayorships throughout the country. Female legislators only made up 8% of Japan’s lower house of parliament and 16% of the upper house.

A public outburst at the Tokyo Metropolitan Assembly in June showcased just that sort of male-dominated brand of politics. Akihiro Suzuki, an assemblyman who has since resigned from Abe’s ruling Liberal Democratic Party but not his post, shouted at female lawmaker Ayaka Shiomura to “get married as soon as possible.” Another colleague heckled, “Can’t you even bear a child?” as Shiomura delivered a speech advocating more government support for pregnant women and young mothers.

“Oyaji cannot be changed,” says Kotoyo Obikawa, an office worker in Tokyo, using the Japanese word for middle-aged man. “Teach gender equality to schoolkids.” She says sexism at her place of work remains rife — she has been asked as a project manager to do secretarial work and is obliged to pour drinks for men at parties. “Sexism is deeply rooted in Japanese culture,” she adds. “A lot of people unconsciously discriminate against women.”

But if the principles of womenomics are anything to go by, Japan’s future largely depends on its ability to uproot that status quo. Kathy Matsui, co-head of Asia investment Research at Goldman Sachs and longtime champion of womenomics, wrote last year that Japan could raise its GDP by as much as 14% if female participation in the workforce expanded to 80%. In an earlier report, Matsui and her colleagues noted an added benefit to bridging the gender gap: “Contrary to popular opinion, higher female employment could actually help raise, not lower, fertility rates.” That would help insulate Japan from the impending economic challenges posed by its aging population.

With that in mind, Abe has set targets, albeit some optimistic ones in the eyes of critics. He declared the goal of boosting female workforce participation from 68% to 73% by 2020 and challenged Japanese corporations to have women in 30% of top managerial positions, also by the end of the decade. As if to lead by example, Abe set the same 30% target for supervisory roles in the civil service, but his government has thus far only achieved a 3% rate. It remains to be seen how exactly his government plans to meet its lofty ideals.

Michael Woodford, the former CEO of Japanese optics company Olympus, says the recognition of the need for reform is “a positive sign of meaningful change in Japan.” He adds, however, that “it’s going to be a long and arduous journey to alter the entrenched behaviors of what I found to be an incredibly chauvinistic corporate world.”

Japan’s Minister of State for Gender Equality, Masako Mori, cited myriad challenges that need to be taken on in the reform process, among them better child-care support and more opportunities for female advancement in the workplace. “I’ve cursed the world around me as I’ve worked,” she said in an interview with Bloomberg. “It’s just so hard for women to work in this country.”

For the likes of Nomura, who are deep in the as yet inadequate bureaucracy, the hope lies in the waiting. “As everything else in Japan goes,” she says, “it will take a very, very, very long time.”

Correction: The original version of this story misspelled the first name of Japan’s Minister of State for Gender Equality, Masako Mori. 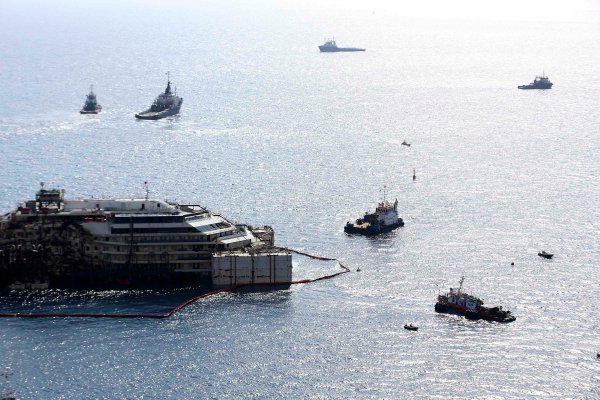 The Costa Concordia Is Being Raised From the Sea Floor
Next Up: Editor's Pick