Mario Goetze of Germany holds the World Cup trophy after winning the FIFA World Cup 2014 final soccer match between Germany and Argentina at the Estadio do Maracana in Rio de Janeiro on July 13, 2014.
Action Press/Zuma Press
By Bill Saporito

It was always going to take a moment of brilliance or breakdown to decide the World Cup final between Argentina and Germany, clearly the two best teams in the tournament, both tactically watertight from beginning to end. That brilliant moment would come in the second period of extra time, at 122:22, when German substitute Mario Götze ghosted behind Argentina’s central defender Martín Demichelis to collect a cross from André Schürrle — a substitute for a substitute — and direct the ball into the net for a 1-0 German win. It was Germany’s fourth World Cup title, its first since 1990, and ample reward for a team that had been rebuilding for this moment since 2000. Watch out, world, there could be more to come.

There would be no magic moment from Argentine star Lionel Messi, the four-time world player of the year who had hoped to make this his ultimate trophy and raise his profile to equal that of Diego Maradona’s, Argentina’s soccer deity. But Messi could only drag the ball wide on the two best occasions he was in on goal. And his last-gasp free kick floated miles over the bar as time ran out. A disappointing game without question for such a great player.

There was never any question that Argentina was going to defend deep and in numbers against a German team that routinely pulled opponents apart with its passing and swift counterattacks. Safety first is never a bad idea, particularly in a final and Argentina went 450 minutes without surrendering a goal. The idea was to defend with six or eight players and then have Messi run at the bigger but slower German defenders.

It could have worked. And it nearly did. Three times in the first half Messi unlocked the German defense with one pass, affording opportunities for Ezequiel Lavezzi and Gonzalo Higuaín to run on to. Higuaín even put the ball in the net in the 30th minute from a Messi-to-Lavezzi combination, but he foolishly charged ahead of the play and the goal was called back for offside. “The soccer gods gave them a bunch a gifts, which they squandered,” noted ESPN analyst Alexi Lalas. None was bigger than the one presented by German midfielder Toni Kroos, who put Higuaín alone on goal with a badly timed back pass. But Higuaín sliced the ball wide off his right foot, and Argentina’s best chance of the half went begging.

Germany would produce a great opportunity of its own at the stroke of halftime when Benedikt Höwedes slammed a header off a corner kick against goalkeeper Sergio Romero’s left post. The ricochet bounced off of Thomas Müller, but he was in an offside position. Danger avoided.

The game was full of intrigue even before it started, with Germany’s starting midfielder Sami Khedira pulling up lame in the warm-up. German coach Joachim Löw chose Christoph Kramer, who had played all of 12 minutes in the tournament, to replace him. In the biggest game of his life, Kramer would last 31 minutes, of which he was fully conscious for maybe 25. After taking a blow to the head from the shoulder of Ezequiel Garay, Kramer appeared wobbly but returned to the pitch — FIFA doesn’t have much in the way of a concussion protocol. Minutes later, Kramer looked as if he was on another planet and had to be helped off the field, to be replaced by Schürrle. For Argentina, its fleet winger Ángel di María, didn’t recover from a thigh injury, which surely changed the team’s tactical thinking.

Although Germany had come closest to scoring, Argentina had been the more dangerous side for the first 45. And Argentina coach Alejandro Sabella tried to increase the danger by withdrawing Lavezzi and introducing Kun Agüero at the half. Within two minutes, Messi had a golden opportunity with the ball on his favored left foot, but his chance for glory would go harmlessly wide. And in the 74th minute, running right to left, he unleashed another bending shot that also went wide.

As the game progressed, the space began closing down, and in the 88th minute, Löw brought Götze on for Miroslav Klose, who closed out his German career admirably. Argentina would once again have a chance to win the game in the 97th, when sub Rodrigo Palacio settled under a pass into the box, only to misplay it momentarily and then rush a lob wide of Manuel Neuer’s net.

Argentina’s moment had gone by. And Germany’s was about to present itself. 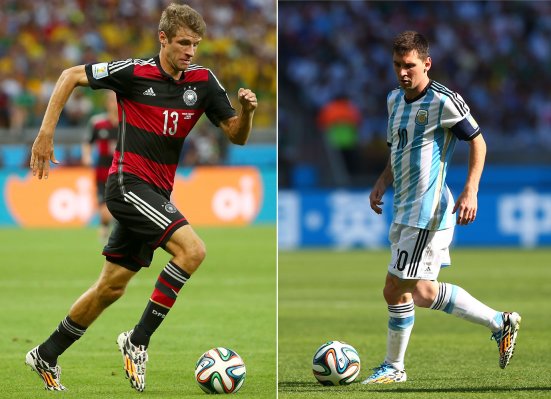 Will the Germany vs. Argentina World Cup Final Be Any Good?
Next Up: Editor's Pick