Behind the Unusual Opening Credits to Masters of Sex

The opening credits sequence for Showtime’s Masters of Sex, which returns Sunday for its second season, is one of the most divisive on television. A suggestive, tongue-in-cheek montage of some of the most enduring sex metaphors and symbols, the sequence has made numerous best-of lists and earned a recent Emmy nomination for Outstanding Title Design—but it’s also attracted some hate from critics and viewers who don’t care for its wink-wink nudge-nudge innuendos.

When Masters of Sex creator Michelle Ashford and executive producer Sarah Timberman brought the project to art director Leanne Dare of Elastic (the studio that has also done credits for True Detective, Game of Thrones and The Americans), their instructions were simple: create a sequence that’s witty and intelligent, something befitting the show’s own smart exploration of sex and sexuality.

“You think of all the obvious things first—beautiful shots showing sex in really nice photography—but what’s going to make it really interesting?” Dare says. But after getting tired of looking through footage of naked bodies and archival material from the 1950s, Dare stumbled upon an image of a flower that set her on a different direction: What if she showed sex without actually showing it?

“People would walk by my screen and be like, ‘What are you doing?’” Dare says. “Explaining it to them, you could see people’s eyes light up. Everyone started throwing in their ideas: What about a train? What about a snake in the grass?”

Creating the sequence, which she says is roughly a 50-50 split between original footage and stock clips, became an all-hands-on-deck effort.

“The folder for this job is pretty hilarious,” says Dare, who used Peggy Lee’s “Fever” as stand-in music before Masters of Sex composer Michael Penn provided the title sequence music. “I sent out mass company emails asking, ‘Has anybody gone to Yellowstone and have footage of geyser?’ ‘Has anyone gone on vacation and seen the monument?’”

Though the beaver and the mushroom clips get the biggest reactions, Dare says her favorite images are the ones that involved intra-office contributions: the cat belongs to a co-worker; the receptionist is the one washing the cucumber; the buttered muffins were an unplanned addition that came about when someone brought the baked goods to work.

“It’s not a high-budget car commercial, so we used any means possible to get the footage we needed to get,” says Dare, whose team gave the footage a grainy, vintage feel to acknowledge to the time period — and to get around the varying quality of the collected clips. “We would just run around the office or run around L.A. looking for stuff to shoot.”

Dare hasn’t paid much attention to the responses, but she says she’d rather provoke strong reactions either way than make a title sequence that simply gets ignored.

“The best title sequences are the ones that touch on the themes of the show but take a new interpretation,” she says. “The ones where you see casts and production photos just feel like a commercial for the show. Masters of Sex has some really interesting themes, and to not give credit to those themes is a missed opportunity.” 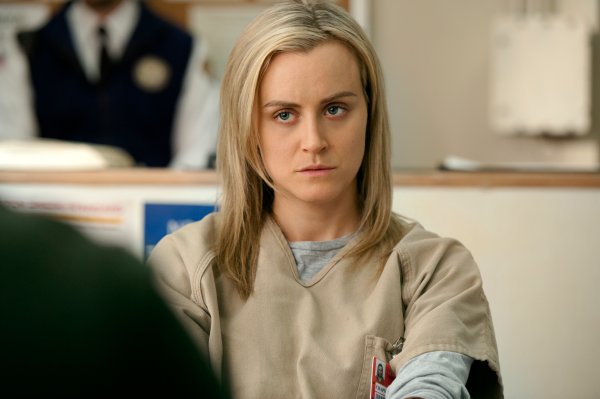 No, Orange Is the New Black Wasn't Canceled
Next Up: Editor's Pick