The Strange Social Science of the Color Red

When it comes to sex and women, red is the first color you think of, right? Red lips, red lingerie, red dress. Studies show men perceive women who wear red on dating profiles as both sexier and more open to a sexual encounter.

Red, it seems, sends a very clear message—about sex. And now scientists add to the scarlet sex literature with this piece of data, which we reported on earlier, in the Personality and Social Psychology Bulletin – turns out it’s not just men, but women too who see women who dress in red as more overtly sexual and open to having sex. Not only that, women perceive other women who sport red clothing as sexual rivals (i.e. after their mates), which raises their competitive instincts and leads them to think negatively about their ability to maintain relationships and be loyal.

What? Does that mean every time I grab the red dress my female friends see me as a romantic threat who is about to move in on their partners? “I don’t think it’s the case that women who wear red are always advertising sexual interest,” says Adam Pazda, a social psychologist at University of Rochester who led the study. “But there is evidence that people make judgments about other people in general based on clothing. You can see how color might easily fit into that.”

Pazda says that studies have also shown that people who view pictures of female news anchors in loose or tight-fitting clothing perceived those wearing the form-fitting outfits as less competent, possibly some derivation of the idea that they were dressing for sex and therefore somehow less able to do their jobs.

One thing to remember about that study, and Pazda’s as well: You probably react differently to strangers you pass on the street than those you’re confronted with in a lab setting, where the questions the scientists are asking can’t help but be leading.

If someone sticks a picture of a news anchor wearing a loose top in front of you, asks you to rate her competence, you’re going to grasp at any possible clue to make your decision, because you have to make a decision, or a judgment. You have no other information on the anchor—you don’t know her, you don’t know her background, and you certainly don’t know her experience, which would be more reasonable measures of her competence. Instead, you’re making a snap judgment and for that, you tend to rely on your cultural experience.

And when it comes to the color red and women, that cultural background tells you that red equals sex. In Pazda’s study, he ran three experiments, one to test whether women perceived other women dressing in red as more sexually receptive than those clothed in the same outfit but in white; another to determine if that perception of being more open to sex implied sexual promiscuity, and a final experiment to test whether another color (green) and outfit changed the results.

Each participant was shown either the red-clothed image or the white- or green-clothed one, and then asked to rate, on a sliding scale, the woman’s openness to sexual encounters and her promiscuity. But since they knew nothing else about the women in the pictures. They couldn’t hear their voices, or watch their behaviors. With no other information to go on what were the participants basing their decisions on?

They were likely relying on deeply ingrained, and even unconscious biases connecting the color red to sex. “When we asked, ‘Is this person interested in sex,’ or how seductive or flirtatious is this person, they are drawing on whatever cues are available to make judgments about them,” says Pazda. “One of the only cues is using the dress or shirt color.”

That may only play a small part in people’s first impressions of others in real life, however, where they have facial expressions, behavior, conversations and other information on which to base their decision. Pazda admits that “people aren’t always making judgments about others automatically. But if we stop and make a judgment, color may influence how that judgment is processed.” 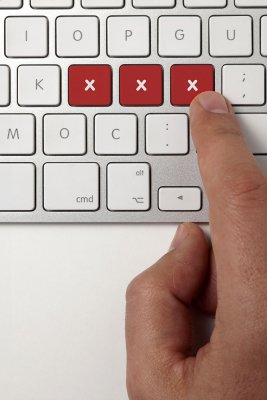