A Heat Fan Who's Happy for LeBron

LeBron James of the Miami Heat looks on during a game against the Atlanta Hawks at American Airlines Arena on November 19, 2013 in Miami, Florida.
Mike Ehrmann—Getty Images
By Michael Grunwald

LeBron James took a lot of ludicrous abuse in 2010 for accepting a better job with better co-workers and a better boss in a better city. He was a free agent. He had every right to take his talents to South Beach. I’m an obnoxious Miami Heat fan, so I’m sad he’s returning to Cleveland—sadder than I ever imagined I’d be—but I’m not going to dump on him in Comic Sans. He’s got every right to take his talents home.

I’ve always thought the widespread over-the-top LeBron hatred reflected something more insidious than natural disappointment about his lame ESPN special announcing his departure from Cleveland. He had fulfilled his contract. Thanks to a salary cap designed to save NBA owners from themselves, he had been vastly underpaid. And Cavaliers owner Dan Gilbert had been too cheap and too arrogant to surround him with winning talent. After he left, Gilbert’s infamous open letter—just removed from the Cavs website last week!—revealed some incredibly ugly sentiments. He clearly saw LeBron as the help.

This situation is different in many ways. The Heat organization did right by LeBron. It surrounded him with good players—not quite as good as I thought, at least this year–who played the right way and helped him lift his game.

And owner Micky Arison has been predictably classy about his departure from Miami. That said, LeBron did right by the Heat, too. He fulfilled his contract and then some, leading the team to four straight Finals and two championships. And I can’t emphasize enough how much fun it’s been to watch him play every night. He’s just unbelievably unselfish on the court. He always seems to make the right play. He guards speedy point guards and giant centers and everyone in between. Even after four MVP’s, he’s still underpaid and underrated; I assume he always will be.

But the dude wants to go home. He thinks he can win more titles with Kyrie Irving—I’m trying to be gracious, but how overrated is that guy?—and (probably) Kevin Love than Chris Bosh and whatever’s left of Dwyane Wade’s knees. He’s willing to go work for an owner who trashed him as a heartless coward after raking in millions of dollars off his labor. Well, he’s given me a lot of enjoyment over the last four years, and I’m not going to start questioning his choices now.

Anyway, this isn’t going to be like 2010. We always knew that LeBron was an Ohio guy. This is a bummer, but the people of Miami will be fine.

I mean, it’s not like we have to live in Cleveland. 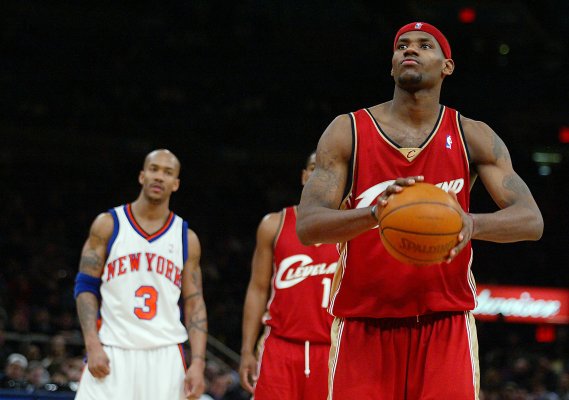