Ape-ocalypse Now in Dawn of the Planet of the Apes

“They’re talking Apes!” says one startled human. “With badass spears!” Ten years after the beginning of the ape-ocalypse, as depicted in 2011’s Rise of the Planet of the Apes, comes the dawn. A “simian flu,” created in a lab, has killed most of the world’s Homo sapiens, and two groups of foragers now occupy the Bay Area. Above, in Muir Woods, are the apes, led by the genetically enhanced chimp Caesar (the great Andy Serkis, transformed by CGI magic). Below, in the wreck of San Francisco, is a ragtag band of human survivors with no electricity and little fuel. Neither group knows of the other until a few humans, seeking to restart a hydroelectric dam up in the forest, encounter a hairier host of primates.

Can the two species live in harmony? Not if there’s to be a Noon of the Planet of the Apes.

Dawn of the Planet of the Apes is its own unusual cross-species: a big-budget summer fantasy with a sylvan, indie-film vibe, and a war movie that dares ask its audience to root for the peacemakers. Rise was thoughtful enough: a parable of parenthood in which a sympathetic scientist (James Franco) raises the infant Caesar to maturity and suffers the consequences of a humane ape fomenting a revolt against beastly men. By the end of that terrific film, Caesar had led his ape army across the Golden Gate Bridge, toward a handful of sequels.

Whereas Rise spent its first hour on the hopeful if ominous daddy-day-care plot, the new film begins in an ape Eden. The first dozen minutes (after a brief recap of the virus outbreak) play like the oddest episode of PBS’s Nature as Caesar leads his extended family in their daily routine: riding horses to chase a herd of deer, battling a grizzly bear and sharing such pacific lessons as “Ape not kill ape.” A blend of Che and Gandhi, Caesar agrees to let the human visitors–ex-architect Malcolm (Jason Clarke), his nurse friend Ellie (Keri Russell) and teen son Alexander (Kodi Smit-McPhee)–do their “human work.” Caesar’s ape rival is Koba (Toby Kebbell), once a victim of man’s cruel experiments; he points to his scars and mutters, “Human work.” If Caesar is Shakespeare’s Roman emperor, then the plausibly vengeful Koba is Cassius, a schemer with a mean and hungry look. He plans an assault on mankind, as Caesar and Malcolm join forces to prevent all-out war.

Matt Reeves (Cloverfield, Let Me In), taking over as director from Rupert Wyatt, with screenwriter Mark Bomback (Live Free or Die Hard) joining Rise scripters Rick Jaffa and Amanda Silver, is smart to focus on the apes. Splendidly realized by actors in motion-capture wizardry, the simians are allowed much more power and nuance than the humans, who are mostly limited to rote scheming and fretting. They give Dawn a case of the drabs–until Koba seizes command and the movie ascends into martial majesty. Watch and wonder at the tracking shot from a tank turret, as apes seize the means of destruction from men.

Dawn ends with closeups of Caesar pondering his lot, like a sad, wise creature from George Orwell’s Animal Farm. This “Ape Forest” is no less plangent in musing on both the origin of the species and its potentially awful end. Also, when it gets going, Dawn is a damn fine movie. 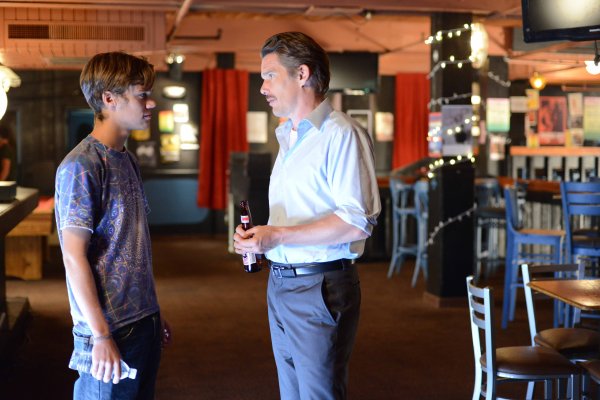 The Camera Adds 12 Years
Next Up: Editor's Pick