The rebel commander in eastern Ukraine was sure Russia’s tanks would soon come grinding over the border to his rescue. He even had an idea of what would provoke the invasion—“130 corpses,” he told TIME. “When they see that on Russian TV, they’ll come and help us.”

That was in the middle of April, and since then the body count in eastern Ukraine has far surpassed that figure. Even the commander himself, who went by the nickname Romashka, is now among the dead, having been shot by a Ukrainian sniper in his stronghold of Slavyansk at the beginning of May. No Russian troops ever came to help him.

For the Ukrainian government that has been a saving grace, allowing its army to force the pro-Russian militants into retreat over the weekend, killing scores of them in the process. But for Russian President Vladimir Putin, this turn in the conflict presents a painful dilemma. His pledges of support for the separatists now seem like false promises to the rebel leaders—and to their many supporters in Russia—and they have begun openly accusing Putin of cowardice and betrayal. The patriotic spell that he cast on his electorate with the annexation of Crimea in March now seems to have lifted, and his sky-high approval ratings are now likely to come down to earth.

The change in tone is already evident on Russia’s propaganda channels, which still depict the rebel fighters as heroes and martyrs—but not a part of any Russian war. “No one is talking about sending in troops anymore. That conversation is over,” says Mikhail Leontiev, one of the leading spin doctors on state-controlled TV. “Now the people need to understand that if Russia falls into this military trap, it will be worst of all for the people of eastern Ukraine, even for the fighters among them,” he tells TIME.

The fighters would beg to differ. In endless missives to the Russian leadership over the past few months, they have asked with growing anger and desperation for the Kremlin to send in troops or at least provide them with advanced weaponry. “We don’t have the means to fight so many tanks,” Igor Girkin, the rebel commander in eastern Ukraine who goes by the nom de guerre Igor Strelkov, said in a video appeal to Moscow on June 19. “I’m still hoping that Moscow has enough shame to take some kind of measures.”

But instead of offering much material assistance, Putin’s allies seem to have launched a slander campaign against Girkin and his men, even accusing them of “crying like women” about a lack of firepower before abandoning the rebel stronghold of Slavyansk this weekend. “He gave up the city without any pressure from the Ukrainian side,” Sergei Kurginyan, another prominent Kremlin propagandist, said in a video denunciation of the rebels. “No one was advancing against him.”

This claim seemed out of sync with the fighting on the ground. For days before the rebels fled Slavyansk on July 5 the Ukrainian army had besieged them, bombarding their positions with heavy artillery and cutting off supplies of food, electricity and water. Indeed, in the first week of June, Kurginyan had himself campaigned for Russia to send military contractors to assist Girkin and his men.

But that was before Putin made his sudden turn toward the role of a peacemaker in Ukraine. His reasons were pragmatic. Western sanctions had already broken financial ties—and frozen bank accounts—that Kremlin elites had spent years nurturing. The next round of sanctions would likely have sent Russia’s economy into a recession, putting at risk the state programs and paychecks that feed Putin’s loyal bureaucracy. A full-scale invasion would also risk a military quagmire that would further drain the Russian budget, as Ukraine’s army has mustered a force impressive enough to put up a serious fight. So in late June, Putin asked his legislature to withdraw his permission for the use of military force in Ukraine, and he began calling for peace talks in league with Western mediators.

The rebels were not the only ones to see this as a sign of duplicity. Russian nationalists have begun to turn on him as well, posting diatribes and even music videos that seek to goad Putin into war, juxtaposing his pledges to “defend the Russian world” with images of bombed-out villages and Russian corpses in Ukraine. “We gave them hope,” Alexander Dugin, one of the leading nationalist ideologues in Russia, said during a television appearance last week. “When we said we’re a united Russian civilization, this didn’t just come from a few patriotic forces. It came from the President!”

And it will not be easy for Putin to back away from those promises. A nationwide poll taken at the end of June suggested that 40% of Russians supported military intervention in Ukraine, up from 31% only a month earlier. This segment of society is largely made up of young, poor and undereducated nationalists, as well as elderly people nostalgic for the glory of the Soviet Union, according to Lev Gudkov, the director of the Levada Center, the independent polling agency that conducted those surveys. After the Russian annexation of Crimea, the euphoria among these parts of the electorate helped push Putin’s approval ratings toward record highs of over 80% “The revival of those strong imperialist feelings, playing on the idea of a fallen nation rising up, all of that ensured the sudden upswing in support for Putin,” Gudkov said. “But I don’t think that can last, probably not even past this fall.”

The all-time peak in Putin’s popularity, Gudkov points out, came right after the Russian invasion of Georgia in August 2008, when his approval ratings jumped to 88% before quickly getting dragged down by the effects of the global financial crisis. By the spring of 2009, they were down to 55%—propped up by what Gudkov calls the apathetic mass of civil servants and state dependents who support Putin “because there is not other choice.”

That slump is now likely to recur. The Russian economy is once again stagnating, this time from the effects of the Western sanctions, and there are already signs that consumers are suffering from the resulting slump in the value of the ruble. New car sales, for instance, fell by a remarkable 17% last month, and the estimated cost of developing Crimea—roughly $18 billion—will put further strain on the federal budget. Such bread-and-butter problems are not enough to dissuade the jingoist minority in Russia, and they are certainly not much help to rebels fighting and dying in eastern Ukraine.

But as the last few weeks have shown, Putin is not the Napoleon many of them believed him to be. 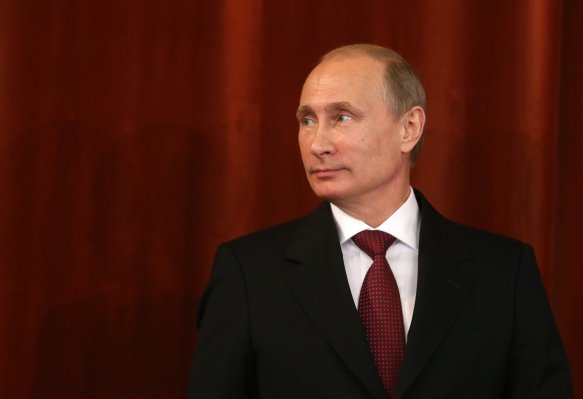