What a week for celebrity op-eds!

First, we have Taylor Swift opining on the future of the music industry for the Wall Street Journal and now we have none other than George Clooney sounding off in USA Today. The subject of Clooney’s op-ed? The Daily Mail, which Clooney essentially chews up and spits out. Clooney rages against a story in the publication that claimed his upcoming nuptials to human rights lawyer Amal Alamuddin was a major source of contention for his fiancée’s family, particularly her mother, Baria, who supposedly opposed their engagement on religious grounds.

Clooney goes on to write that an incorrect story about a celebrity isn’t the issue — as he’s apparently “used to the Daily Mail making up stories” about him — but that this particular story goes beyond celebrity gossip: “The irresponsibility, in this day and age, to exploit religious differences where none exist, is at the very least negligent and more appropriately dangerous.”

The actor, who is the son of retired broadcast journalist Nick Clooney, explains that he has respect for right to freedom of speech — and knows that it will interfere with his private life from time to time — but he seems to view the publication as far more sinister. He writes:

For its part, the Daily Mail denies fabricating the story. In an email to TIME, a MailOnline spokesman said that the “story was not a fabrication but supplied in good faith by a reputable and trusted freelance journalist … However, we accept Mr. Clooney’s assurance that the story is inaccurate and we apologize to him, Miss Amal Alamuddin and her mother, Baria, for any distress caused. We have removed the article from our website and will be contacting Mr. Clooney’s representatives to discuss giving him the opportunity to set the record straight.”

Yet Clooney certainly isn’t the first person to strike back at the British publication, which was named the most widely read news website in the world in 2012 with upwards of 52 million visitors a month. Just a few months ago, Harry Potter author J.K. Rowling won a libel lawsuit against the paper; singer Elton John and business mogul Alan Sugar have also won libel suits against the Daily Mail.

And then there are those who have leveled their criticism specifically against the publication’s website, Mail Online, which traffics largely in celebrity gossip. The site’s “Femail” section, which tends to focus on women celebrities and their bodies and what they may or may not be wearing at any given moment they’re caught by the paparazzi, is known for being petty or cruel or demeaning.

Though criticism lobbed at the website’s “Femail” content doesn’t tend to center on whether the stories are factual or not, many do view them as destructive in another way. In 2012, Observer columnist Eva Wiseman wrote that she was partaking in a self-inflicted boycott of the Mail Online, because “I was boring myself with my constant outrage at the sidebar’s dissection of women, and worried that it was making me more judgy … As judgmental as the sidebar, whose camera is constantly focused on pop stars’ thighs.”

While it might be hard to reconcile the denunciations of the Daily Mail and its extreme popularity — again, 52 million visitors a month on the website — it appears as if Clooney has struck a fresh cord of outrage. Online and social media comments, including many from journalists and editors, are almost unanimously and forcefully in support of the actor. As Clooney himself notes, the Daily Mail “must be so very proud.” 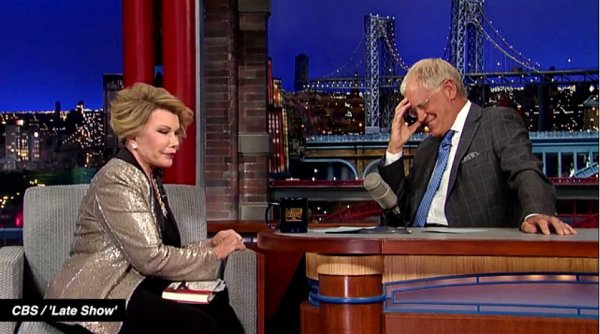 David Letterman Walks Out During Joan Rivers Interview
Next Up: Editor's Pick