A Brazil soccer fan cries as Germany scores against her team at a semifinal World Cup match as she watches the game on a live telecast in Belo Horizonte, Brazil, July 8, 2014.
Bruno Magalhaes—AP
By Bill Saporito

Brazil entered the game without its leading scorer, Neymar, and its defensive captain Thiago Silva but with the backing of its passionate crowd. But the Seleção went out of the game with its reputation as soccer’s most creative force in tatters. A team that hadn’t lost at home since 1975 suffered a defeat that was almost unthinkable.

The hammering began 11 minutes into the game when Brazil failed to mark Thomas Mueller on a corner kick—a criminal lapse against any German team— and Mueller took his time to sweep the ball past goalie Julio Cesar. The goal silenced the roaring home crowd but it was hardly a disaster. Croatia had scored first against Brazil in the opening game. Until that time, Brazil had held its own, even starting by brightly bringing its attack into Germany’s end.

But the Seleção was also ceding massive amounts of space on the field, as it had done against Colombia. But Germany is certainly not Colombia and soon began running into gaps in the Brazilian lines with menace. That menace turned to 2-0 when Miroslav Klose collected Mueller’s pass deep in the Brazil box and after Cesar blocked his initial shot he had an easy time pushing the rebound past the hapless keeper. The goal made Klose the all time leading World Cup scorer with 16.

The crowd went from stunned to comatose but they were soon to be shaken out of this bad dream by something even worse. Hardly a minute later, Dante, in for Silva, fed a hospital ball to Fernandinho 40 yards in front of his own goal. Fernandinho was dispossessed and Germany was down Brazil’s throat again. Kroos easily slotted home a couple of passes later. Barely two minutes after that, Brazil failed to clear a rolling ball delivered across its own 18 yard box and Toni Kroos smacked a left footer past Cesar. By the time that Sami Khedira collected Germany’s fifth goal in the 29th minute after exchanging passes with Mesut Oezil, Brazil’s defense had been reduced to numb spectators who looked as if they had just watched a horrific car crash.

The Brazilians were whistled off the pitch by the crowd that loved them at the start of the game. “It looks as if it’s 11 against 9,” noted television commentator Steve McManaman. It looked worse than that.

At the half, Brazil benched the execrable Hulk and replaced him with Ramires and took Fernandinho out for Paulinho. The changes, if way too late, injected some life into Brazil, and within the first 10 minutes of the second half produced three great goal scoring chances. But Manuel Nueur’s twin, point-blank saves against Paulinho signaled that there would be no miracle comeback. Instead, with Brazil taking increasing risks, Germany piled on more goals. Substitute Andre

Schuerrle added two well-taken goals before Oscar managed a hardly-a-consolation goal in the 90th minute. The Brazilians walked off the field in tears; history will not be kind to them. 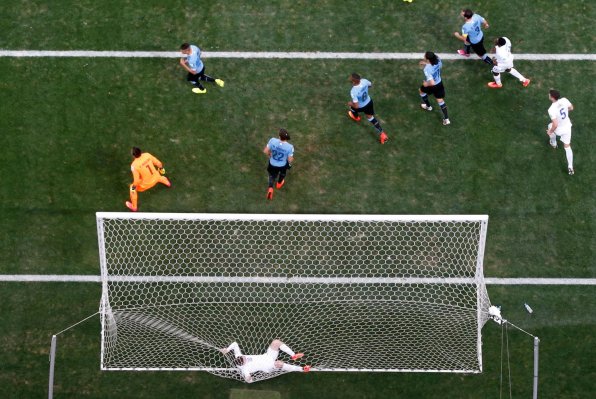 The Soccer Net: A Popular Destination for World Cup Players
Next Up: Editor's Pick