Legal experts are skeptical of the $10 million lawsuit filed by a man after he was broadcast on ESPN while sleeping during a baseball game.

Andrew Rector, who was sitting amongst Yankees fans with his head resting on his shoulder, appeared to have dozed off during the April 13 Boston Red Sox-New York Yankees game. Once Rector appeared on camera, ESPN commentators Dan Shulman and John Kruk quickly began discussing his slumped-over body.

“Maybe that’s his buddy, and he likes him a lot better when [Rector’s] asleep,” Kruk said, referring to a man sitting next to Rector. The commentator duo also remarked that Rector was “oblivious,” expressing surprise that he had fallen asleep during the fourth inning.

Rector filed the suit against ESPN, Shulman, Kruk, the New York Yankees and Major League Baseball (MLB), which also picked up the footage, according to Courthouse News Service. Rector claims damages for defamation and intentional infliction of emotional distress, citing false statements said about him including that Rector is “a fatty cow” that represents a “symbol of failure.”

In response, ESPN stated that “the comments attributed to ESPN and our announcers were clearly not said in our telecast. The claims presented here are wholly without merit.” MLB declined to comment.

Legal experts agree with ESPN’s assessment. “I think he has no chance on this lawsuit,” Vincent Blasi, a professor at Columbia Law School and expert in tort law, told TIME. “If the grievance is defamation, you have to show someone said something factually false about him. It requires a misstatement of an empirical fact.”

The idea of defamation rests on false written or spoken statements about an individual that damages his or her reputation. Classic defamation cases include suits in which the plaintiff was falsely accused in public statements of manipulating clients in business, or having a debilitating infectious disease.

“[Rector was] clearly been set up for ridicule. He’s unfortunate. He’s been made a butt of jokes. But there’s just no defamatory statement about him,” Harvard Law School professor John Goldberg told TIME, noting that defamation suits rest more on reputation damages than emotional distress.

Goldberg added that the suit, which was filed in Bronx County Supreme Court in New York, would face an uphill — if not entirely vertical — battle. Though there are constitutional limits applying to all U.S. states, New York is “notoriously unfriendly to defamation suits,” and it is “very unlikely that the suit will get anywhere,” he said.

Still, defamation suits have the potential to result in significant compensation. A Palestinian shopkeeper, Ayman Abu Aita, filed in 2009 a multimillion lawsuit against comedian Sacha Baron Cohen and the Late Show With David Letterman after the TV program aired a clip from Baron Cohen’s movie Bruno that portrayed him as a terrorist. Aita claimed the movie damaged his business and caused him to receive death threats. The case was subsequently settled in 2012 “to the mutual satisfaction” of everyone, according to Fox News. 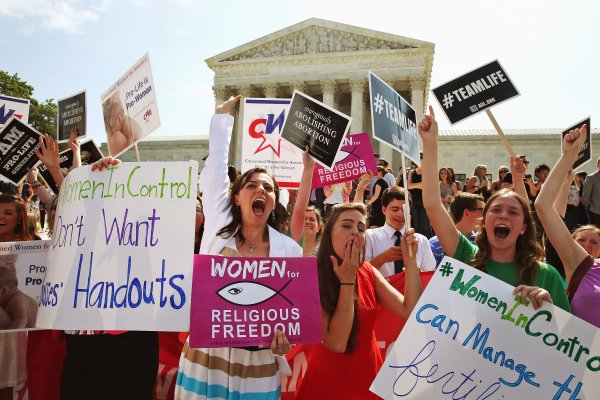