Sanaa, 26, washes clothes in a borrowed washing machine at a shelter in Saida, Lebanon, on March 4, 2014.
Lynsey Addario—UNHCR
By Andrew Katz

A new U.N. report grimly details the daily plight of thousands of Syrian refugee mothers who have fled civil war and now toil as their household’s primary breadwinner.

Four-fifths of the 2.8 million Syrians who have fled their war-torn homeland since March 2011 are women and children, says the U.N., leading to some 145,000 refugee households headed solely by women. The survey, based on three months of interviews with 135 women in Egypt, Jordan and Lebanon, provides a snapshot of the complexities they endure while trying to feed and protect their children, find enough work to make rent and retain any semblance of the lives they enjoyed before war broke out.

They represent women who once managed their homes, even as their husbands usually handled physical and financial security, but who now lead households in unfamiliar and often insecure communities. Lebanon, a nation of 4 million, has taken in more than a million people. At least 600,000 have entered Jordan, with most gravitating toward urban areas, an influx that has crushed certain infrastructure. In addition, some 137,000 have made it to Egypt.

António Guterres, the U.N. High Commissioner for Refugees, said “escaping their ruined homeland was only the first step in a journey of grinding hardship” and called their treatment “shameful” as the crisis worsens. “They have run out of money, face daily threats to their safety and are being treated as outcasts,” he added, “for no other crime than losing their men to a vicious war.”

Typically, their first challenge was simply finding a roof. Many make do with overcrowded or makeshift housing, due to few options and difficulties in securing a stable and sufficient income. Only one-fifth of those interviewed had paid work, and many others said they relied on cash assistance from aid groups or generosity from others in their community.

Paying rent is among their top stressors, as is feeding loved ones. With an average of 5.6 people per household, some mothers said their families ate less as a whole or individuals held back so others could eat more. “Rent is more important than food,” one woman who lived with her seven children in Amman told the U.N. “We don’t remember what meat or fruit tastes like,” echoed another, who kept a home of nine people in Giza, Egypt.

The vast majority of women interviewed relied on food vouchers from the U.N. World Food Programme, but very few complained that their households were going hungry.

Among a number of other issues reported were an inability to afford proper medical care, regular instances of verbal harassment and even offers of free accommodation in exchange for sexual favors. A significant portion said they left their homes much less often than they did in Syria.

The U.N. expects these problems to worsen, as it estimates the total number of Syrian refugees will reach 3.6 million by year’s end, unless aid agencies, donors and host governments renew their commitments of support. 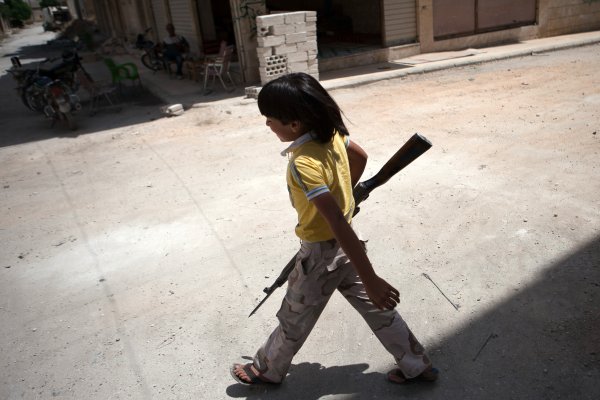 Syrian Children Talk About Life As Child Soldiers
Next Up: Editor's Pick