Join Us for a Conversation Between TIME and the Space Station

The space station as photographed by the shuttle Endeavour
NASA; Getty Images
By Jeffrey Kluger

Everything about the International Space Station (ISS) is built to wow. It’s almost exactly the size of a football field, has as much habitable space as a six-bedroom house, orbits 230 miles overhead, required 115 space flights to build and carries a solar panel array with a surface area of one acre. The offices of TIME magazine—located on the slightly less glamorous Avenue of the Americas and 51st St. in New York City, and with about as much habitable space as, um, an office— can hardly compete. But on July 9, the two worlds will briefly collide, as TIME chats via video downlink with the ISS.

There are currently six crewmen aboard the station, and we’ll be talking to three of them: commander Steve Swanson and flight engineer Reid Wiseman, both of NASA, as well as flight engineer Alexander Gerst of the European Space Agency. Like all space station crews, this one has been tending both to matters celestial (conducting biomedical, engineering and materials science experiments, as well as maintaining the station itself) and matters terrestrial, most recently their eye-in-the-sky observations of Hurricane Arthur.

Other matters down on Earth concern the crew too. It may have been fun and games when Gerst’s native Germany bested the U.S. in the first round of the World Cup, but the dust-up between Russia and the U.S. over Ukraine is awfully hard to ignore when the other three members of the crew are Russian cosmonauts. TIME will be chatting with the crew about these and other matters—and would like to hear your suggestions.

Consider what you’d like to ask three men in a million-pound machine flying over head at 17,500 mph if you had the chance—because now you do. 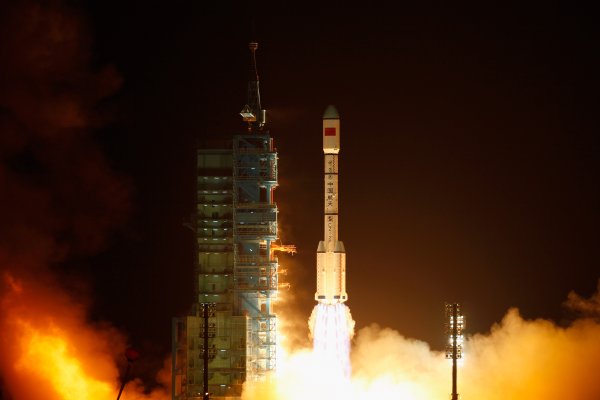 China's Falling Space Station Is Not Going to Hit You on the Head. Unless it Does
Next Up: Editor's Pick