Republicans Can't Decide if Obama Is a Weakling or a Tyrant

At some point over the next few weeks, the House will vote to sue President Obama to compel him “to follow his oath of office and faithfully execute the laws of our country,” House Speaker John Boehner said in an op-ed on CNN.com over the weekend.

“[T]oo often over the past five years, the President has circumvented the American people and their elected representatives through executive action, changing and creating his own laws, and excusing himself from enforcing statutes he is sworn to uphold—at times even boasting about his willingness to do it, as if daring the American people to stop him,” Boehner wrote.

The White House has called the move a stunt and notes that, compared with other Presidents, Obama’s 182 executive orders is actually a relatively moderate number: Ronald Reagan had 381 such orders, Bill Clinton had 364 and George W. Bush had 291 (though Obama still has a few years yet to catch up).

“Republicans are mad at me for taking these actions,” Obama told a crowd in Minneapolis on June 27. “They’re not doing anything, and then they’re mad that I’m doing something. I’m not sure which of the things I’ve done they find most offensive, but they’ve decided they’re going to sue me for doing my job.”

The judicial branch has long settled disputes between the executive and legislative branches, though. Individuals, or in the case of Hobby Lobby, “closely-held corporations,” have sued the President, or his representatives, and won. The Supreme Court 13 times in the past three years has struck down the President’s executive orders: just last month it found three of Obama’s recess appointments to the National Labor Relations Board unconstitutional.

And Boehner’s list of grievances against the President is long: selectively enforced sanctions against Iran passed by Congress; the unilateral pushback of several launch and enrollment dates for Obamacare; the issuance of tough coal laws by the Environmental Protection Agency; the unannounced release of the Taliban five in exchange for POW Bowe Bergdahl in Afghanistan; and the No Child Left Behind waivers that Republicans hate. It remains unclear whether Republicans will sue on some or all of these points.

But as they mull how to proceed, Boehner and the GOP might be hard pressed to prove a personal loss—a necessity to win the suit—due to any of these policies; indeed they have raised vast sums of money from making Obama out to be a tyrant worthy of deposing. And Democrats will benefit too. The Democratic Congressional Campaign Committee has boasted of raising nearly $3 million “since Boehner and the Republicans announced their ludicrous plan to sue President Obama.” No word from GOP groups how much they’ve raised.

The problem is, the Republican Party is not uniform on Obama’s autocracy. Conservative blogger Eric Erickson mocked Boehner’s move. “John Boehner’s lawsuit is nothing more than political theater and a further Republican waste of taxpayer dollars,” he wrote Monday. “John Boehner and the House Republicans may lack the testicular fortitude to fight President Obama.”

Worse, many Republicans have actually called on Obama to use his executive powers more, calling him the weakest President in a generation. As the GOP has moved on from Obamacare and the recovery economy, it has taken up a schizophrenic approach to its criticism of the President. Here are seven ways Republicans have called on Obama to use his “pen and his phone,” as Obama puts it, more not less:

1. Keystone Pipeline: Congressional Republicans have been eager for the Administration to make up its mind on whether to build this pipeline from Canada to Louisiana. They’ve even passed resolutions calling on the President to approve it.

2. Trade: Forget the fact that Congress hasn’t granted the President the authority to negotiate free trade acts. Republicans are encouraging Obama to complete two massive deals ASAP—one with Asia and one with Europe. That Free Trade Promotion Authority needed to approve those deals? No worries, Republicans will overcome Democratic doubts and pass it whenever the President likes.

3. Border Security: Immigration reform may be dead, but one part of it is very much alive: shoring up the border. The fence! The patrols! Must keep those unaccompanied minors out! Republicans have been clamoring for beefed up border security since the immigration debate under Bush in 2005, even after they built the massive 1,951-mile fence along the U.S.-Mexico border.

4. Syria: Remember when Obama decided he needed congressional approval to bomb Syria? Congress went from hawk to dove overnight, suddenly balking at the idea of taking responsibility for another war in the Middle East. Which is partly why Syria never got bombed—well, that and Vladimir Putin’s cagey moves. Resolutions have been introduced in both chambers calling on Obama to do more to help arm and train the moderate Syrian opposition. Never mind needing permission from Congress.

5. Iraq: If Syria wasn’t hard enough, Iraq is an even bigger challenge. Many GOP neocons blame the collapse on Obama’s pulling out of all U.S. forces from Iraq two years ago and ending U.S. involvement there. Clearly, then, he’s not doing nearly enough to fix the problem. Boehner even accused Obama of “taking a nap” while Iraq burned. Does he need permission to act? Nah, he still can use Bush’s old war powers resolution still in effect from 12 years ago.

6. Boko Haram. Bring back our girls, were the instructions from Congress after the terrorist group kidnapped hundreds of schoolgirls in Nigeria. The girls still haven’t been found, but Obama did send over military advisers to help look for them. Again, no permission from Congress needed—lawmakers simply wanted Obama to act ASAP.

7. Ukraine/Russia: Obama is getting played by Putin. Obama’s is Putin’s lap dog. Or so the GOP refrains go. Clearly, the President should be doing more to help Ukraine stand up to tyranny and oppression—not to mention Russia annexing the Crimea—or so says a spate of congressional resolutions. What “more” means is fairly vague: sanctions, visa restrictions, frozen accounts? All things presidents do with pens and phones. 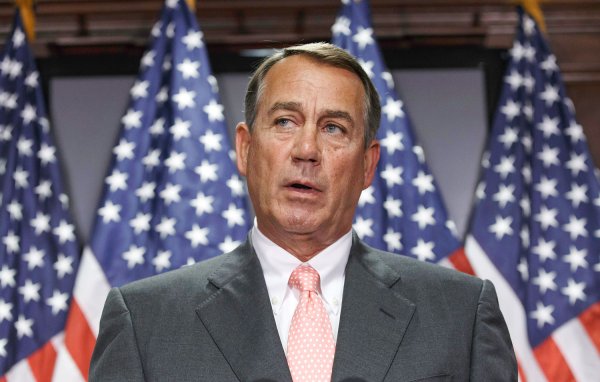 Boehner: Obama Has 'Circumvented the American People'
Next Up: Editor's Pick