Rocket sirens could reportedly be heard across southern Israel Monday as violence between Israeli forces and Palestinians in the Gaza Strip escalated following the Sunday arrest of six Israelis in connection with the murder of a Palestinian teenager.

Israel’s security cabinet moved to intensify attacks against Hamas on Monday evening, as over 70 rockets were launched toward Israel from the Gaza Strip during the day, Haaretz reports. The Israeli military had earlier launched air strikes on targets in Gaza Strip, and says it is assembling 1,500 reservists in anticipation of escalated violence from Hamas and other Islamic militant groups.

The latest bout of sustained violence began over the weekend, after the discovery of the corpse of Mohammed Abu Khdeir, a 16-year-old Palestinian believed to have been kidnapped and burned alive.

Three out of the six suspects arrested on Sunday have reportedly confessed to the murder. Police believe Khdeir’s murder was in revenge for the killing of three kidnapped Israeli teens last month, which Israel has blamed on Hamas, Reuters reports.

On Monday morning Hamas announced that six members of its military were killed in an overnight attack on a tunnel. Israel denied the claim and said the tunnel collapsed following the detonation of explosives that went off for an unknown reason. 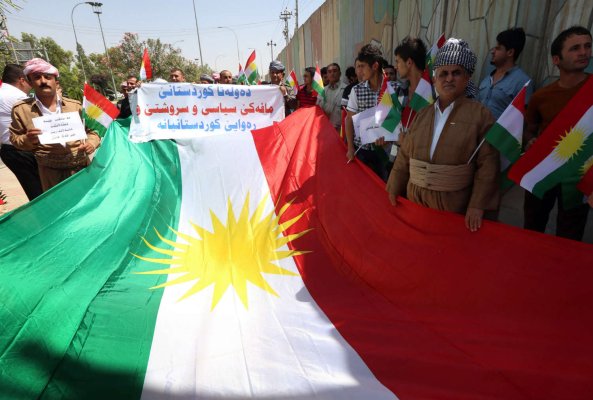 Amid Iraq Chaos, Kurds Inch Toward Independence
Next Up: Editor's Pick