On a Wartime Anniversary, China Steps Up Its Anti-Japan PR Campaign

A woman reads from an inscription on the Marco Polo bridge, or Lugouqiao, in west Beijing on Sept. 3, 2013.
Ed Jones—AFP/Getty Images
By Hannah Beech

On the evening of July 7, 1937, and into the next day, Japanese soldiers began making their way across the Marco Polo Bridge in Beijing, beginning a ruthless eight-year occupation that ceased only with imperial Japan’s defeat at the end of World War II. As far as anniversaries go, 77 may not be a particularly iconic number. But the People’s Daily, the mouthpiece of the Chinese Communist Party, announced that it would be conducting rare live coverage of the Marco Polo Bridge Incident commemoration.

First up in the morning was a “grand gathering” at the Museum of the War of Chinese People’s Resistance Against Japanese Aggression in Beijing, which was attended by China’s President Xi Jinping. “We firmly take the path of peaceful development and safeguard world peace,” said Xi in a speech, according to Xinhua, the Chinese state media agency. “History is history and facts are facts. Nobody can change history and facts. Anyone who intends to deny, distort or beautify history will not find agreement among Chinese people and people of all other countries.” Xi also unveiled what Xinhua called an “anti-Japan war sculpture.”

The generous coverage of the 77th Marco Polo Bridge Incident anniversary appears to be part of an effort by the ruling Chinese Communist Party to highlight Japan’s brutal wartime past, at a time when geopolitical tensions between the two Asian powers are simmering. Last week, Japan’s hawkish Prime Minister Shinzo Abe pushed through a controversial reinterpretation of Japan’s pacifist constitution that allows the nation to engage militarily in order to defend its allies should they come under attack. The notion is known as collective self-defense.

Abe’s administration also issued a report last month that reviewed the process by which a 1993 Japanese government statement was made apologizing for the systematic sexual enslavement of Asian women by the Japanese military. While the review did not result in any overturning of the Kono Statement, just the fact that a reappraisal was conducted enraged both the Chinese and South Korean governments, who have accused Abe and his conservative cohorts of diminishing Japan’s wartime abuses.

Amid a territorial spat over uninhabited isles in the East China Sea, a July 7 Xinhua editorial on Japan opined, “War is hell, but there are always devils who try to spark war and trample peace under foot.” (The editorial did also concede that “Japanese people are respected for their diligence and energy-saving awareness.”)

Last week, the Chinese State Archives Administration announced that it would begin releasing confessions by Japanese who were convicted as war criminals by China’s Supreme People’s Court. The full texts of the 45 confessions are being released daily online. China is also applying to UNESCO to have documents related to the Nanjing Massacre and Chinese comfort women (as the women forced to sexually service Japanese soldiers are called) added to the Memory of the World Register — a move that has gained popular support on Chinese social media. Earlier this year, China’s rubber-stamp parliament designated Dec. 13 as a national remembrance day for the Nanjing Massacre.

Earlier this year, I visited Nanjing to tour the Memorial Hall of the Victims of the Nanjing Massacre by Japanese Invaders, which ensures that the six-week slaughter that began in late 1937 is not forgotten. The museum welcomes 6 million visitors a year with a permanent exhibition called “A Human Holocaust.” Photos and videos show women disemboweled after they were raped, along with piles of Chinese corpses. A vast graveyard of pebbles represents the lives stolen by Japanese soldiers.

Museum director Zhu Chengshan was scathing in his appraisal of Japan’s Prime Minister Abe, whose grandfather directed industrialization efforts in Manchuria, the northeastern Chinese region that Japan turned into a puppet regime and where imperial soldiers carried out horrific crimes, including biochemical experiments on civilians. “Japan has consistently denied its mistakes and says it loves peace but [these are] empty words,” Zhu said. “A lot of serious criminals were let go and some became the Prime Minister of Japan, like Abe’s grandfather. Abe is taking Japan to the right but there is not just one Abe. There are many other people in Japan like him.”

But Chen Guixiang, 91, a survivor of the Nanjing Massacre, was more forgiving. She recalled, through tears, how her grandmother was murdered by Japanese soldiers. Fearful of being raped or killed, Chen, then 14, hid in a hole for three months, her legs atrophying from the confined space. She shared museum director Zhu’s antipathy toward Abe but didn’t hold an entire nation accountable. “I think the Japanese government was pro-war and evil,” Chen said, “but the Japanese people are good.”

After we talked, Chen shuffled out of the museum, past massive sculptures representing anguished figures brutalized by Japanese soldiers. The number 300,000, which China estimates as the death toll of the military rampage, is emblazoned repeatedly on an outdoor wall of shame. On July 7, People’s Daily posted a picture of this wall on its home page. The day before, a new website was launched to publicize the Nanjing Massacre, a joint effort by the Memorial Hall and official news agency Xinhua. Those who visit the website will be able to light virtual candles to honor the massacre’s victims, so they will never be forgotten.

— With reporting by Chengcheng Jiang / Nanjing 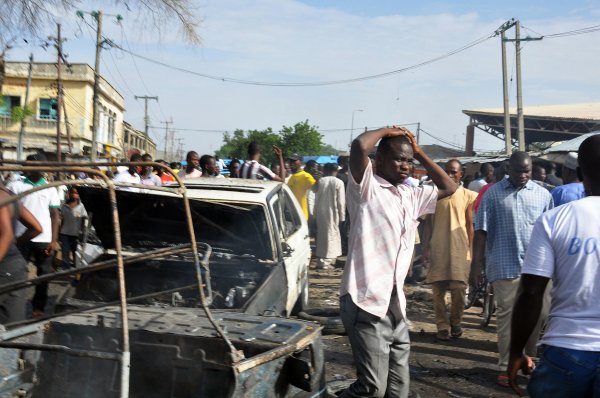