Israel Arrests 6 Suspects in Kidnap and Murder of Palestinian Teen

Israeli military patrols the streets in the West Bank city of Hebron on July 6, 2014
Abed Al Hashlamoun—EPA
By Karl Vick

Israeli police arrested six suspects on Sunday in the kidnapping and murder of a 16-year-old Palestinian boy, raising hopes of reducing a spiral of violence grounded in anger over his killing, which police say appears to be revenge by Jewish extremists for the murders of three kidnapped Jewish Israeli youths buried just hours earlier.

The six suspects are Jewish and were traced through closed-circuit security footage that captured the July 2 abduction of Muhammad Abu Khdeir from the sidewalk near his East Jerusalem home. Security officials scoured footage from traffic cameras to track the route of the kidnappers’ vehicle to the forest where the boy’s burned corpse was found an hour after his abduction.

The suspects, three of whom are minors, are from Jerusalem, Beit Shemesh, a large bedroom city 20 miles west, and Adam, a small West Bank settlement. All were known to hold extremist views but were not believed to have been members of an existing organization and so were not being watched closely, according to police officials. Three of the six were implicated in the attempt to kidnap a child of 8 or 9 a day before near where Abu Khdeir was taken, police said. One police official said one of the suspects is cooperating with the investigation.

The case has shaken Israel’s Palestinian community, and with it the security situation across the country of 8 million. Over the weekend, violent protests erupted beyond Jerusalem after the Palestinian Authority reported that an autopsy indicated that Abu Khdeir was still breathing when he was set on fire. Riots spread from the neighborhood of the abduction to majority-Arab cities in Israel’s north, including one where masked men stopped cars and attempted to beat occupants who spoke Hebrew, the language of Israel’s Jewish majority.

The situation was further aggravated by footage of masked Israeli police in Jerusalem badly beating an apparently unconscious Palestinian youth, allegedly a relative of Khdeir and a U.S. citizen. The cell-phone footage of the beating and later photos of the battered face of Tariq Abu Khdeir, a resident of Tampa, prompted a protest from the U.S. State Department that served to further put the Israeli government on the defensive.

So it was that, even as missiles continued to fly out of the Gaza Strip toward Israel, the normally hawkish Prime Minister Benjamin Netanyahu counseled calm on Sunday. “We must act responsibly and with restraint,” he said at the start of the weekly Cabinet meeting, cautioning against “inflammatory rhetoric.” A 48-hour deadline for a cease-fire had come and gone, but there was no official talk of moving Israeli troops into the Palestinian enclave, as advocated by right-wing ministers in Netanyahu’s coalition government. Instead, the case was made for accommodating Hamas, the militant Islamist faction that governs Gaza, and which Israeli authorities blamed for the kidnapping of the three Israelis.

“Yes there is talk of a cease-fire, but unfortunately Hamas is still firing,” Yaakov Peri, a minister from the centrist Yesh Atid party, and former head of Israel’s domestic security agency, Shin Bet, said in a conference call on Sunday. Hamas is obliged under the terms of its most recent cease-fire with Israel to prevent all rocket fire from Gaza. But Peri said the group is currently too politically weak — partly because of the measures Israel took against it after the kidnapping of the Israeli teens — to subdue smaller but more militant groups, such as Islamic Jihad. “It seems for the time being Hamas is not able to take any control of these groups, and it is a pity,” Peri said.

The week’s events raised fears of a third intifadeh, or uprising, among the Palestinian population who claim the same land as Israelis, while showing how unexpected events can badly destabilize the region. After the June 30 discovery of the bodies of the three Jewish teens, Naftali Fraenkel, Gilad Shaer, and Eyal Yifrah not far from the West Bank junction where they had been hitchhiking, the first issue discussed was the form of retribution Israel would take for the deaths. Calls for revenge grew fiercer with the release of an agonizing tape of a call one of the captives placed to police, which appeared to capture sounds of the fatal gunshots, followed by the apparent killer’s joyful singing.

Jewish extremists rampaged in Jerusalem the next night, and Abu Khdeir was abducted a few hours later, forced into the same car into which young Jewish Israelis had tried to force a boy of 8 or 9 a day earlier, according to local residents and Israeli security officials. What followed was a descent into communal conflict alarming to both Israel’s Jewish population and the Arab minority.

“Each community is retreating into itself, laden with anger,” Ali Zahalka, a high school principal in the Arab Israeli city of Kfar Kara, wrote in the bestselling Hebrew daily Yedioth Ahronoth on Sunday, after reports that Israeli Arabs in Kalansua were stopping cars to check the ethnicity of drivers. On Sunday, three Palestinian workers were reported attacked in Hadera, a majority Jewish working-class city. The dynamic had officials on edge.

“A third intifadeh is not something you can declare in advance,” said Peri, the former Shin Bet chief. “It’s something that’s spontaneous from the street, from the mob.”

— With reporting by Aaron J. Klein 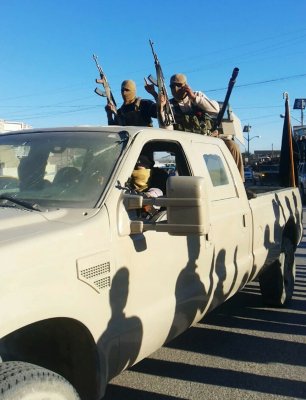 Survey Shows a Growing Fear of Islamic Extremism in the Middle East
Next Up: Editor's Pick