Novak Djokovic kisses the trophy after defeating Roger Federer in the men's singles final at the All England Lawn Tennis Championships in Wimbledon, London, on July 6, 2014
Ben Curtis—AP
By Sean Gregory

Roger Federer had one of the best service sets of his beautiful career during Sunday’s Wimbledon final. He was tied a set a piece with Novak Djokovic, the top seed of this year’s tournament. On serve, Federer treated Djokovic like a junior: he aced him again and again, 13 in all, to Djokovic’s one. Some games were barely competitive.

Federer still lost that set. And eventually, the match.

A locked-in Djokovic held his own serves in that crucial third set, and took the tiebreaker that put him a set up. Federer, who was seeking a record eighth Wimbledon title, wouldn’t go quietly; he staved off a 5-2 Djokovic lead and a championship point, in a dizzying fourth set to force a fifth. It was the first Wimbledon final to go the distance since Federer won his 2009 classic over Andy Roddick (final score of that fifth set — 16-14).

The match won’t be remembered like Rafael Nadal’s marathon win over Federer in the 2008 final. Still, it was a gripping match, one of the best finals in recent Grand Slam history. Early on, Federer wasn’t showing his age. He was moving with authority and confusing Djokovic with his tactical approach, sometimes playing a serve-and-volley game, sometimes staying home on the baseline, where his racket was a magic wand putting the ball in at seemingly impossible angles. We’ve seen that Federer at Wimbledon so many times before.

Not that Djokovic didn’t make Federer pay when he approached the net: he hit 14 passing shots for winners, to Federer’s two. Federer served big throughout the match: he had 29 aces, to Djokovic’s 13. But when the ball was in play, Djokovic’s reach and quickness — he hustled so hard, he fell a few times on Wimbledon’s worn grass — enabled him to play just enough defense to wear down Federer, who smacked championship point into the net.

Was this Federer’s last chance at a Slam? He turns 33 in August, and if he was going to steal one more title, it was probably going to be his favorite one, Wimbledon. Federer has 17 Slams, while Rafael Nadal, five years his junior, has 14, including nine at the French Open. Even if Nadal falls short everywhere else but clay, he could eclipse Federer’s record.

But that won’t be easy, thanks to this Djokovic fellow. It’s easy to obsess over the Roger-Rafa title chase, while forgetting that Djokovic is, you know, the best player in the world. Since his monster 2011, when he won every Slam but the French, Djokovic has just won two Australian Opens. Not a bad haul, but coming into this match, he had lost three straight Grand Slam finals, including a four-setter to Nadal in this year’s French. Djokovic is close to breaking through at Roland Garros — winning that title would give him a career Grand Slam.

After the match, an emotional Djokovic announced that he was about to become a father; his future wife is six months pregnant. He called Wimbledon “the best tournament in the world, the most valuable one” and you know something, he’s right: it’s the Masters of tennis, the tournament with the most prestige. His second Wimbledon title is his sweetest, especially after defeating the seven-time champ in five sets. Federer stood by the net, gracious, as Djokovic spoke. The closest, perhaps, he’ll ever get to the Wimbledon trophy again. 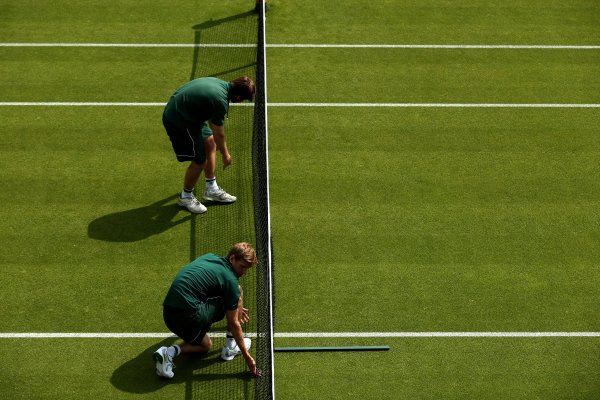 Wimbledon: The Scene Behind the Green
Next Up: Editor's Pick