Hurricane Arthur made landfall in North Carolina Friday morning with winds whipping along at up to 100 miles per hour. By early Friday evening, it approached southern Massachusetts, particularly affecting Cape Cod, where a tropical storm warning remains in effect. The storm was expected to dump over an inch of rain every hour and leave more than eight inches total before the storm blows back out to sea.

Arthur had a particularly strong impact on travel. Along the Eastern Seaboard, the storm crippled travel as airlines canceled or delayed thousands of flights. But things picked up by early evening, with New York’s John F. Kennedy International Airport reporting average delays of only about 15 minutes, according to the Federal Aviation Administration.

And while fireworks will light up the night sky Friday in New York City, Washington, D.C. and other cities across the country, Boston celebrated Independence Day with fireworks a day early in hopes of avoiding Arthur. Revelers watching fireworks light up the Charles River, however, were evacuated by Massachusetts State Police 20 minutes into the show, and rain began to pour shortly thereafter.

Also in the nation’s capital, President Barack Obama spent part of the day at a naturalization ceremony for new U.S. citizens, including many members of the armed forces and their spouses. He and first lady Michelle Obama will host a reception on the White House lawn Friday evening for service members and their families to view D.C.’s fireworks show.

In the middle of his busy day, the President received a Fourth of July message from his Russian counterpart, Vladimir Putin. Putin wished Obama a happy Fourth of July and called for improved relations between the two countries. Tensions between Putin and Obama have been high in recent months as the political situation in Ukraine has deteriorated, and especially after Russia annexed Crimea earlier this year.

Many other Americans, however, were more content to enjoy one, maybe two hot dogs on what was a day off for many. Check out the gallery above to see how the country celebrated Independence Day. 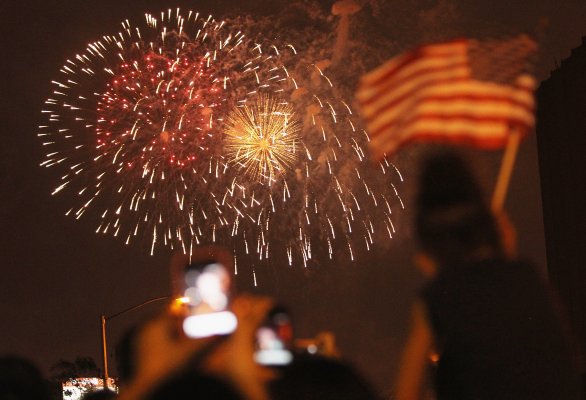 5 Fourth of July Firework Fails
Next Up: Editor's Pick