A police curfew has helped restore calm to Mandalay, Burma’s second largest city, following mob violence between local Buddhists and Muslims that has so far claimed two lives and left more than a dozen injured.

Rioting was sparked Tuesday evening when Buddhist gangs — including monks — attacked Muslim-owned businesses, cars and a mosque with bricks and make-shift weapons, apparently enraged by the rape of a Buddhist woman allegedly by two Muslim owners of a teashop.

One victim, a 30-year-old Buddhist man named Tun Tun, was hacked to death with a sword, according to local officials, while a Muslim man, Soe Min Htway, was apparently killed in retaliation while traveling to dawn prayers. Around 400 local police were deployed Thursday to keep the peace and rubber bullets were reported fired.

Five Muslims were reportedly arrested Friday after security officials searched their homes and found knives. “Police definitely know these are used for ceremonial purposes,” Ossaman, an imam at Mandalay’s largest mosque, told Reuters. “They were not breaking any law.”

Mandalay is the home of extremist Buddhist monk Wirathu and has long been a hub of simmering inter-religious tensions; the controversial cleric appears to have been instrumental is spreading the rape rumors that led to the latest violence via his Facebook page.

On Thursday, he warned of Muslims “armed to teeth with swords and spears” preparing a jihad against local Buddhists, reports the Democratic Voice of Burma.

Sporadic violence between Buddhists and Muslims has convulsed Burma for over two years now, as the former pariah nation emerges from a half-century of brutal military dictatorship. More than 240 people have been killed and at least 140,000 displaced, most of them Rohingya — a heavily persecuted Muslim group largely denied citizenship.

Buddhist depictions of Muslims as sexual predators are commonplace, spurring the sectarian bloodletting; when the most recent spell of violence erupted in June 2012, it was in response to the rape and murder of a Buddhist girl in western Arakan state blamed on three Muslim men.

Extremist rhetoric frequently portrays Muslim men as being hungry for multiple Buddhist wives, forcing them to convert. The prejudice has spurred the introduction of a monk-championed interfaith marriage ban bill, which is currently before parliament.

While official figures state that only four percent of Burma’s 60 million people are Muslim, independent observers put the true as figure significantly higher.

Meanwhile on Wednesday senior Buddhist clergy claimed that all monks present during the Mandalay riots were there as peacemakers. “We are holding a press conference to clarify that the monks were not involved,” Galone Ni Sayadaw, of the All Burma Monks Union-Upper Burma, told assembled media.

Burmese President Thein Sein used a radio address Thursday to call for stability without specifically mentioning the Mandalay turmoil. “For reforms to be successful, I would like to urge all to avoid instigation and behavior that incites hatred in our fellow citizens,” said the former junta general.

Nobel laureate Aung San Suu Kyi, a former political prisoner who has now been elected to parliament, has faced international censure for her reticence regarding ongoing sectarian violence, but briefly addressed the subject during an interview with Radio Free Asia.

“The authorities should properly handle those people who are spreading rumors,” she said. “Without rule of law, more riots will come.” 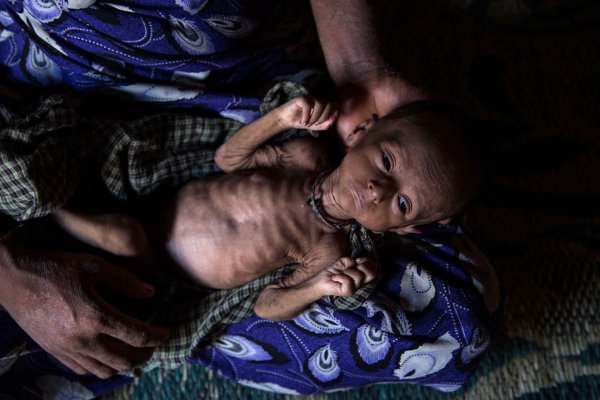 The Health Crisis in Burma's Concentration Camps
Next Up: Editor's Pick