Obama Restarts Solyndra Program, But Solyndraphobia Could Ruin It

US President Barack Obama pauses while speaking to people at 1776, a tech startup hub, on July 3, 2014 in Washington.
Brendan Smialowski—AFP/Getty Images
By Michael Grunwald

The Obama Administration announced Thursday that it plans to hand out $4 billion in new clean-energy loans, reviving the controversial program that went dark after the notorious failure of Solyndra in 2011. This time, though, the danger is not another Solyndra. The danger is excessive fear of another Solyndra.

Solyndraphobia is perfectly understandable, because the demise of Solyndra—a cutting-edge solar-panel manufacturer that defaulted on a $535 million federal loan—was a political debacle for President Obama. Republicans launched a slew of investigations of the loan, and even though they uncovered no evidence of wrongdoing, “Solyndra” became their one-word critique of the president’s efforts to promote renewable energy.

And even though President Bush signed the bill creating the Energy Department’s loan program in 2005—his administration actually selected Solyndra from among 143 applicants for the first loan—the program became a partisan target, Exhibit A for GOP complaints about Obama’s “crony capitalism.”

Overall, though, the loan program has been remarkably successful. It has poured $32.4 billion into dozens of projects that will help reduce greenhouse-gas emissions, including one of the world’s largest wind farms, a half dozen of the largest solar farms, the nation’s first commercial-scale cellulosic biofuel refineries, the nation’s first new nuclear power plants in three decades, and a factory where Tesla Motors builds electric vehicles that are shaking up the auto industry. It has also financed a few clunkers, including Solyndra and its fellow manufacturer Abound Solar, both victims of an unexpected plunge in solar-panel prices, as well as Fisker Motors, which made beautiful electric vehicles that didn’t sell.

But all lenders make some bad loans. And not every clean-energy firm that receives federal support can succeed in the marketplace; the hope is that some of them will use their government jump-start to beat the odds and change the world. As a White House official once said to me, some Pell Grant recipients become drunks on the streets. That doesn’t mean we shouldn’t help low-income students attend college.

So far, the loan program has only burned through about $800 million of its $10 billion in reserves. Mitt Romney suggested during a debate with President Obama that half of its loans had failed; in fact, more than 95 percent are performing fine. That’s a record most private portfolio managers would envy, and it’s especially remarkable for a program that’s supposed to focus on innovative projects that private financiers won’t bankroll without government help. The goal was to help push promising green technologies across the so-called “Valley of Death,” and it seems to be working. Now that a bunch of huge solar projects have been built with government help, a bunch of copycat projects are under construction with purely private financing. They’ll benefit from the lessons learned in the initial round.

Peter Davidson, who runs the loan programs, says the Energy Department has learned some lessons, too. At the Renewable Energy Financing Forum in New York last week, he suggested that the department’s new round of loans will steer clear of manufacturers like Solyndra. It was an exciting company that had attracted a billion dollars in private financing, and it built its government-financed factory on budget and on time. But when silicon prices dropped and heavily subsidized Chinese manufacturers began selling panels at rock-bottom prices—a generally excellent trend that has sparked a spectacular solar boom in the United States—Solyndra’s business model collapsed and the department ended up looking ridiculous.

“We can deal with technical risk,” Davidson told me. “But when you’ve got manufacturing risk, you’re dealing with all kinds of stuff we can’t control.”

That makes sense. Manufacturing can be a crapshoot. But it would be a shame if Solyndraphobia drove the Energy Department towards overly safe projects that don’t need government help. We don’t need an energy version of the Export-Import Bank, offering slightly cheaper financing to borrowers with no plausible risk of default. The loan program’s main goal should be facilitating disruptive projects in order to reduce our dependence on fossil fuels, not avoiding failure in order to make sure taxpayers recoup every dollar. The Ex-Im Bank’s repayment rate is 99.7 percent; that means it’s very unlikely to have a Solyndra problem, and equally unlikely to accomplish anything useful.

Davidson noted that the most successful first-round clean-energy loans went to wind and solar plants that already had contracts in place to sell their electricity. For first-of-their-kind projects like Crescent Dunes, a Nevada solar thermal plant that will store the sun’s power to generate electricity at night, the government support was absolutely vital even with a contract in place, because private investors were wary of the technical risks. But private investors tend to be more willing to finance second-of-their-kind projects, and the next Crescent Dunes should be built without government loans.

The Energy Department’s new solicitation does suggest it’s looking for the next thing, not more of the old thing. It called for “catalytic” technologies in several areas where breakthroughs are desperately needed, like renewable energy storage, waste-to-energy projects, and “drop-in” biofuels that can substitute for fossil fuels without changes in engines or infrastructure. None of those technologies have been commercial successes yet, and Republicans will be on the lookout for another Solyndra that they can use to tarnish Obama’s legacy and kneecap green energy.

But Solyndraphobia can’t prevent the broiling of the planet. Obama won’t be able to finance more transformative successes like Tesla without financing more embarrassing flops like Fisker. Clean energy is a risky business, and any good program will make bad loans. If we’re not failing, we’re not really trying. 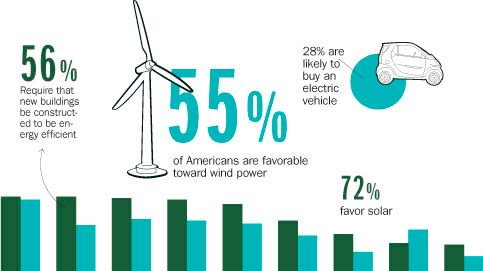 This Is How Americans Feel About Different Energy Sources
Next Up: Editor's Pick