Even in a country where political scandals are a constant, the French were stunned to see their former President Nicolas Sarkozy hauled into a police station on July 1 for 15 hours of interrogation. Sarkozy was brought before judges well after midnight that day, where he was formally placed under investigation for corruption and influence peddling, relating to suspicions that Sarkozy had tried to wrest information from a senior judge about a legal case being built against him. An exhausted-looking Sarkozy was shown on television in the back of a police car, clearly shaken by his ordeal. “Is this normal?” Sarkozy asked in a national television and radio interview on the evening of July 2—his first such Q&A in two years—that had millions of viewers spellbound. “I’m profoundly shocked at what has happened.”

But besides his shock, Sarkozy, who lost his reelection bid to President François Hollande in 2012, might already be plotting his next political move—a move that could involve casting himself as the victim rather than the villain in his latest legal drama. As the French absorbed the newest accusations against Sarkozy, the ex-president has emerged in this week’s blanket media coverage as a lone wolf up against the establishment. That’s an ironic twist for a politician whose image as the consummate insider partly led to his reelection defeat. Two days after Sarkozy’s 15-hour police grilling, Sarkozy watchers say they believe he has several options ahead—not all of them bad. “He could become chief of the opposition in fighting both Hollande and the judges,” Christophe Barbier, editor of the French newsweekly L’Express, told TIME on Thursday. “That seems the most probable solution.”

Sarkozy has faced so many investigations since winning the presidency in 2007 that he and his lawyer had tried to avoid surveillance by using prepaid telephones registered in other people’s names. Police tapped those phones, however, leading them to focus on whether the two men tried to wrangle details about the case against Sarkozy from a top appeals-court judge—the subject of his grilling on Tuesday. The charges could lead judges to bring the case to trial, with Sarkozy and his lawyer Thierry Herzog potentially facing a five-year sentence and a $680,000 fine if found guilty. To say the least, that would hugely complicate Sarkozy’s ambitions for a comeback against the beleaguered President Hollande in the 2017 elections.

Even if the former president beats this new investigation, however, it is not his only legal battle. Last year, investigators finally dropped charges alleging that Sarkozy took advantage of the aging billionaire L’Oreal heiress Liliane Bettencourt by taking millions of euros from her to fund his 2007 presidential bid. But they are still probing allegations that Sarkozy sought some $68 million for his 2007 campaign from then-Libyan dictator Muammar Gaddafi—the investigation in which he is now suspected of interfering with the senior judge.

But this week’s grilling cuts to the heart of a deeper issue, and it is one that rankles French voters: whether the alleged behavior of Sarkozy was just business as usual for the country’s famously cloistered elites. It could be “simply part of the bullying tactics of people in power that have been tolerated so far,” says Agnès Poirier, author and columnist for the political magazine Marianne, writing in the Guardian on Wednesday. Sarkozy, says Poirier, has regularly demanded information from officials about investigations against him, including once calling the head of the French intelligence service. “If nothing else, this new episode is shedding some more light on “‘le système Sarkozy,'” Poirier said.

Still, Sarkozy is hardly ready to hang it up politically. After laying low for Hollande’s first year in office, he has spent months angling for a return, and has said he intends deciding his next moves—including a possible presidential bid—by summer’s end. Enraged and combative on television on Wednesday night, Sarkozy nonetheless worked hard to dismantle the image of himself as someone accustomed to special access. He called the new charges “grotesque,” but quickly added, “I’m not demanding any privilege.” His voice dropping to a low rasp, he said, “If I have made mistakes I will face the consequences.”

Yet some of the consequences of Sarkozy’s legal battles are already contributing to the deep disarray of French politics. Sarkozy fares much better than President Hollande in most polls, and the former president is popular among many UMP voters, with supporters mobbing him on the sidewalk after his interrogation on Tuesday. Yet the UMP is locked in its own struggle for power. Jean-Francois Copé was appointed as leader only after bitter infighting. Since he resigned in May three former prime ministers have been running the party in an awkward, interim arrangement, as they wait to see what Sarkozy will do.

In fact, there is only one clear winner in this political upheaval: Marine Le Pen, leader of the far-right National Front, which won the most French votes in the European Union elections in May, and which grabbed nearly one-quarter of the votes in France’s municipal elections last March, largely by slicing off support by disaffected UMP-ers. Pitching the two major parties as corrupt and ineffectual, Le Pen has soared in the polls. She told TIME in May that she believes she is headed for the top, that she intends running for president and that she believes that “the National Front will be in power within 10 years.”

Barbier, editor of L’Express, believes that much will depend on whether Sarkozy can cast himself as a new man: calm and reflective, rather than the volatile, temperamental man the French remember from his time in office. “If he is more calm, more tranquil, if he goes into it in that style,” Sarkozy could perhaps prevail, Barbier says. He believes Sarkozy’s first move might be to take back control of the UMP, and knock it into shape, ready for the presidential race in 2017.

Sarkozy’s makeover might already have begun. After a mostly combative TV interview on Wednesday night the former president struck a more conciliatory tone afterwards, tweeting: “I love my country passionately and I am not a man to be discouraged.” His supporters hope that passion and tenacity will be enough to carry their man through. 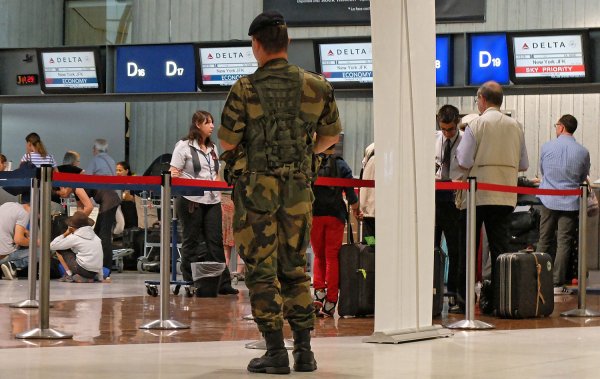 France Beefs Up Security on U.S.-Bound Flights
Next Up: Editor's Pick