There are so many wisdoms from the Prophet specifically advising against anger — all reflecting the Qur’anic description of the righteous as those who “hold in check their anger” (3:134). The advice is much needed. Indeed, some of the worst actions committed by human beings — from killing to domestic abuse — are, at least partly, a result of unbridled anger. For most of us our anger and its potent manifestations tend to be so much more subtle — from showing someone a cold shoulder to de-friending them on Facebook.

But, the problem with leaving anger unresolved is that it can get the best of us and has the potential to become a monster within us. This monster not only has the potential to lash out against others, but it also has the potential to simply make us inwardly miserable. No one likes to be angry. It’s just that some of us have a really hard time controlling this part of the emotional brain. It’s like asking someone not to feel, to become numb. Doing nothing about it, though, is not the solution.

So, here are three pieces of advice from Islam’s spiritual sources that may go a long way in managing anger:

First, the Qur’an advises that when Satan stirs us up with anger, the best course of action is to seek refuge in God (41:36). There is recognition in this that anger comes from a dark and fiery place and that the remembrance of God can bring light and coolness to one’s affairs. You can do this by chanting God’s beautiful names, reciting Qur’an, or anything else that helps you remember the Source of Peace (one of the 99 names of God in Islam).

Secondly, the Prophet Muhammad advised that when we feel angry we should perform ritual washing (wudu) with cold water. Again, the idea is to cool the body and soul from the heat of anger. In the Islamic tradition this means gently washing your hands, rinsing your mouth, sniffing water into your nose, washing your face, arms, head, neck, and feet. All of the outer limbs are renewed and cooled with this practice.

Third, the Prophet advised that if you become angry while standing, then sit down, and if you are sitting down, then lie down. It is a physical motion to temper the rising flames within.

Of course, all of this requires deep self-awareness. Sometimes we don’t even know that we’re angry or how angry we are. This is why Ramadan and fasting are such special times. Fasting facilitates deeper introspection and allows us to hear what is going on inside of ourselves when we’re not so busy with the mundane. 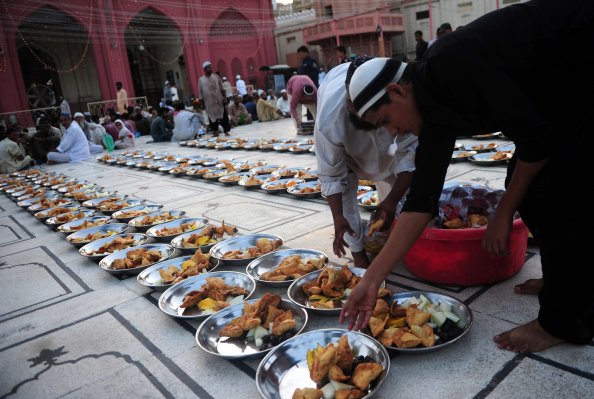 Ramadan, Day 4: Eating Haves and Have Nots
Next Up: Editor's Pick