Iran’s foreign minister posted a defiant YouTube message on Wednesday, just as high-stakes talks over Iran’s nuclear program are resuming amid dim hopes for a breakthrough by a mid-July deadline.

Zarif’s digital salvo came the day before the formal resumption of talks between Iran, the U.S., and five other major powers—and less than three weeks before the July 20 expiration of November’s interim nuclear agreement, which froze the progress of Iran’s nuclear program in return for relaxed international sanctions.

Experts call the video a clear message to the West and an effort to gain a public relations advantage as the final round of nuclear talks get underway. “Given that the video is in English, Zarif is clearly speaking to a foreign rather than a domestic audience,” says Karim Sadjadpour, an Iran expert with the Carnegie Endowment for International Peace. “His message to Washington is that a failure to reach an agreement today will only result in a more advanced Iranian nuclear program tomorrow. His message to the world is that a failure to reach an agreement will be America’s fault.”

In talks that began last fall, the Obama administration hopes to reach a long-term agreement trading sanctions relief for limits on Iran’s ability to build a nuclear bomb. Such a deal might be Barack Obama’s last chance for an enduring foreign policy triumph in a star-crossed second term.

Zarif’s defiant tone, however, reinforces pessimism about the prospects for such a comprehensive deal, at least this summer.

“This probably isn’t going to get done by July 20,” says George Perkovich, also of the Carnegie Endowment, who recently returned from meetings in Tehran with people informed about the negotiations.

November’s interim deal allowed for a six-month extension, until January 2015, and many experts predict that outcome. Earlier this year Obama officials seemed to raise expectations for a more comprehensive deal, one that could last for a decade or more, but have recently struck a much more pessimistic tone. Even so, most close observers expect that the talks will continue rather than collapse entirely.

“I don’t think either side can afford to take the blame for walking away from the table if the other side is prepared to continue,” said Gary Samore, who formerly handled the Iran nuclear issue for the Obama White House, said in recent public remarks.

In latest example of Iran’s canny digital diplomacy, Zarif’s new video presents a soothing tone, opening with a shot of the diplomat strolling past a trickling fountain. A piano gently plays. But Zarif’s tone is stern. Speaking in fluent English, Iran’s western-educated negotiator denounces U.S.-led efforts to halt Iran’s nuclear program over the past decade, including “the murder of our nuclear scientists, the sabotage of our facilities” and “military threats” from Washington.

Zarif may have been responding, in part, to a Wednesday Washington Post op-ed by Secretary of State John Kerry, warning Tehran not to “squander a historic opportunity to end Iran’s economic and diplomatic isolation,” and to accept limits that would allow for a peaceful nuclear program.

Obama officials in Vienna are pressing Iran to dismantle several thousand of its roughly 10,000 centrifuges, which are used to enrich uranium into a more fissile form, and to accept other limits on its nuclear facilities and research programs. Their goal is to extend the “break out” time required for Iran to produce enough weapons-grade uranium to make one nuclear bomb, to as long as one year, thereby giving the international community time to detect and respond to the move. In return, Iran would get relief from harsh economic sanctions against its banking, energy and other key sectors.

Congressional Republicans and some Democrats are skeptical of such a deal, and argue for cranking up economic sanctions until Tehran, in effect, cries uncle and dismantles its nuclear program entirely.

Zarif insists that won’t happen. “To those who continue to believe that sanctions brought Iran to the negotiating table, I can only say that pressure has only been tried for the past eight years…. It didn’t bring the Iranian people to kneel in submission and it will not now, nor in the future,” he says in his message.

Zarif’s tone reflects a bargaining gulf that remains over everything from the number of centrifuges Iran will retain to the operation of a heavy water plutonium reactor at Arak, whose fuel can easily be fashioned into bombs. The U.S. also wants more transparency about any military dimension to Iran’s nuclear program. Iran maintains that the world has no right to dictate its use of nuclear technology for what it says are peaceful energy and medical purposes.

Complicating matters are renewed concerns that Iran could might try to build a bomb in secret after striking a deal that covers its known nuclear sites. A new report from Harvard’s Belfer Center for Science and International Affairs warns against the potential false comfort of a “nuclear Maginot line.”

Meeting with the Iranians in Vienna are the U.S., Great Britain, France, Germany, China and Russia—a group known as the P5+1, because, along with the U.S., it includes the five permanent members of the United Nations security council, plus Germany.

Casting a long shadow, meanwhile, is Israel, which sent a delegation to Washington on Sunday to repeat their government’s view that Iran should surrender its nuclear infrastructure entirely. In an interview after his arrival here, Israeli intelligence minister Yuval Steinitz cited the success of the deal that forced Syrian president Bashar Assad to give up his declared chemical arsenal, which has now been removed from the country. Only “total dismantlement” can ensure that Iran doesn’t test the international community’s will in the future.

Zarif wants the world to believe that Iran has no such intention. “We still have time to put an end to the myth that Iran is seeking to build a bomb,” he says. “My government remains committed to ending this unnecessary crisis by July 20. I hope my counterparts are, too.”

Even if both sides are genuinely committed to a deal, however, that doesn’t mean they can agree on one. 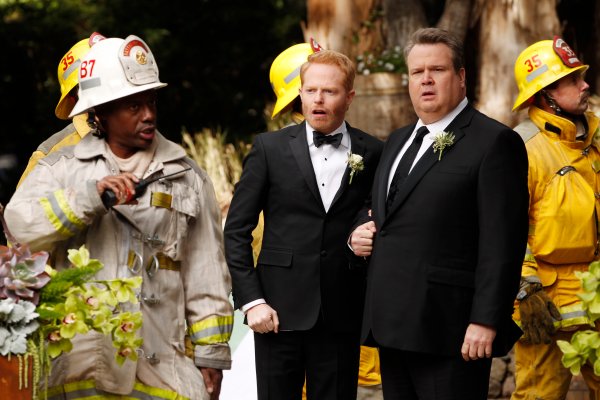 Iran Has a Modern Family Copycat
Next Up: Editor's Pick