A Palestinian teen was reportedly abducted and killed near his home in Jerusalem on Wednesday, apparently in revenge for the deaths of three kidnapped Jewish Israelis buried just hours earlier.

The crime, which brought strong condemnations from the Obama Administration and European officials, threatened to throw the conflict between Israelis and Palestinians beyond the control of leaders who were calculating how to respond to the last outrage without further escalating tensions on the ground. But in the space of a few hours, the mood shifted from communal grief over the deaths of the young Israelis to fears of ascending communal violence.

The abduction followed a night of mayhem by Jewish extremists, about 200 of whom marched through Jerusalem chanting “Death to the Arabs” and assaulting Arab Israelis found on the streets. A few hours later, shortly before 4 a.m., Muhammad Hussein Abu Khdeir, 16, was forced into a car by two men on a sidewalk not far from his home in Shuafat, a Palestinian neighborhood of East Jerusalem. An hour later police discovered a charred body in a forest on the outskirts of the city. Family members said it was Muhammad, who had been on his way to dawn prayers, as was customary during the Muslim holy month of Ramadan.

“The settlers killed my son, they kidnapped him and killed him,” his father, Hussein Saed Abu Khdeir, told TIME after returning from Jerusalem’s main police station.

He reached for his Samsung smartphone, tapped the screen and pulled up a photo of two young men on a sidewalk. He said the image had been taken from a surveillance camera at a candy store around the corner that recorded the abduction.

“These are the ones who kidnapped my son,” he said.

A few yards away, dozens of young men flung stones at Israeli riot police assembled two blocks downhill. The riot began shortly after the body was discovered, and went on all day. Police fired foam-tipped bullets and sound grenades. Youths twirled slingshots and the occasional Molotov cocktail. The pavement between the two sides might have been gravel, so littered was it with stones.

A row of ambulances stood by a hundred feet behind the tin barricades protesters had erected beside the building containing the Khdeirs’ home. As an ambulance driver reported that more than 60 people had been wounded by 5 p.m., another injured youth arrived, slung across the shoulders of a heavyset man in an orange medic’s vest.

Israeli Prime Minister Benjamin Netanyahu issued a statement urging both sides “not to take the law into your own hands” and promising to “uncover quickly who is behind this despicable murder and what motivated it.” A relative of one of the Jewish Israeli teens, Naftali Fraenkel, who also held U.S. citizenship, was quoted as saying “If a young Arab man was murdered for nationalistic reasons then it is a horrifying and disgusting act. There is no distinguishing blood from blood. Murder is murder, whatever the nationality or age may be. There is no justification, no forgiveness and no atonement for any murder.”

But the distance between the sides grows with each incident. At the political level, Palestinian leaders leaped at the opportunity to turn the tables on Israel, which used the teens’ disappearance as a pretense to arrest more than 400 West Bank activists, most of them with the militant Islamist group Hamas that Netanyahu blames for the teens’ deaths.

“Israel bears full responsibility for this incident,” Palestinian Authority President Mahmoud Abbas said in a statement, which concluded with a threat to drag Israel before U.N. courts, the most militant course Abbas has been willing to chart. “The Palestinian leadership will continue its discussions following this escalation, including joining international organizations.”

On the ground, pessimism ruled. Hussein Abu Khdeir was asked if he had faith in the Israeli police he had spent most of the day with. “No,” he said. Why not? “Because we’re Arab.”

“They are not concerned,” volunteered Yousef Mkhemer, a community activist seated across the crowded porch. Alluding to Netanyahu’s historic support for Jewish settlements on the West Bank, he said, “The boss of the settlers is the boss of the government. So he cannot shame himself.”

The distrust runs beyond political leader, however, to alternate realities. Many if not most Palestinians refuse to say that the three Israeli teens were abducted at all. Their disappearance is widely regarded as an excuse to force apart the newly minted unity government supported by both Hamas and Abbas’ secular Fatah party — a reconciliation polls show has been enthusiastically embraced by Palestinians, but condemned by Netanyahu, who has repeatedly invoked the teens’ kidnapping as reason for dismembering it.

“It’s a lie,” said Amjad Dweik, 18, of the Israeli teens’ kidnapping and murder. “As soon as the two parties Fatah and Hamas began the reconciliation, Israel began to make up all kinds of things to ruin the unit.” Hussein Abu Khdeir agreed: “They did it,” he said, referring to Israel.

In the next breath, the skeptics describe the abduction of Muhammad as vigilante vengeance for the death of the Jewish teens. Residents say young Jewish Israelis had been stalking Shuafat since the bodies were discovered on Monday. Dweik and others spoke of a boy of 9 pulled away from his mother by young Jews a day earlier on the same street where Muhammad was taken. The boy was saved, they say, when passersby intervened.

“He was scratched,” said Hussein Abu Khdeir, referring to the child, who local residents say had been holding his mother’s hand. “They grabbed him by his neck.”

His own son’s abduction and apparent death were likewise revenge.

“Yes, of course,” he said. “There’s no other explanation.” 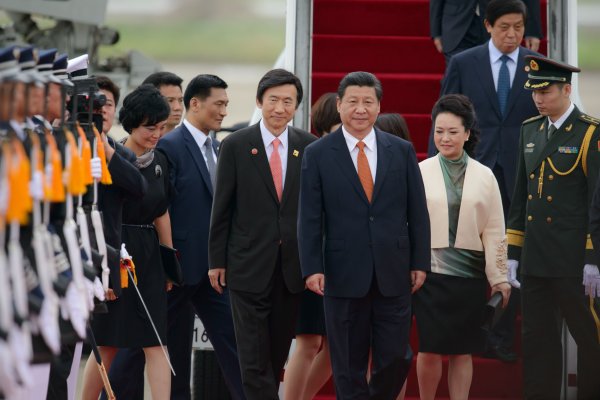