If There's Going to Be a Thai Civil War, Isaan Will Be Its Front Line

The folk music of Thailand’s northeastern Isaan region is known as morlum and it follows a familiar theme. Typically, a young, wet-behind-the-ears girl or boy leaves the emerald rice paddies to move to the big city. Once there, facing exploitation, social estrangement, and heartbreak, the protagonist yearns for the pastoral wholesomeness of their birthplace.

It’s a tale many in Thailand’s largest region can relate to. “When you live in upcountry Thailand, everywhere you go — your neighbor’s house, restaurants, the market, taxis — that’s the music that they play,” says singer Christy Gibson, who grew up listening to morlum and its close relative luk thung after moving to Isaan with her parents at the age of 6, and is one of the few foreign musicians to have made it in the Thai mainstream.

But despite making up a third of the population, the people of Isaan — who share a culture and language closer to neighboring Laos — have for centuries been second-class citizens to the inhabitants of Bangkok and central provinces, who often are descended from Chinese stock. And although it is the rice-bowl of a country that, until recently, was the world’s largest exporter of the grain, the region has historically suffered from chronic underdevelopment.

As a result, local people traditionally headed south to Bangkok or the country’s tourist zones to work as taxi drivers or construction workers, often returning home to help at harvest time. Many women, weary of toiling under the hot sun for a pittance, ended up working in the sex industry.

In recent times, though, Isaan has experienced a comparative upturn in fortunes, with new investment transforming the area into a manufacturing hub. In the villages, rickety wooden houses are being rebuilt in concrete, with shiny pickup trucks parked outside. In the cities, glitzy shopping malls, boasting ice-skating rinks and global coffee chains, are the hangouts of spiky-haired teens in fashionable streetwear.

The upshot? “Isaan people have become cosmopolitan villagers who have sophisticated understandings of themselves as Thai and as participants in a global labor force,” says Charles Keyes, professor emeritus at the University of Washington and author of a recent book on Thailand’s northeast.

But not is all well. The successive ousting of Isaan-backed governments by the Bangkok-based political establishment is reinforcing the sense of ethnic difference and consolidating a political identity for Isaan alongside its cultural and linguistic ones. And following Thailand’s latest military coup on May 22, many Isaan people are calling for greater autonomy — even independence.

“There’s a generalized anger at the military government,” says David Streckfuss, an American scholar based in the Isaan city of Khon Kaen, who has studied Thai culture for over 25 years. “Civil war is never a plan, it’s an outcome of bad choices,” he adds. But “it’s not unimaginable, as there is so much pent-up anger.”

Isaan identity, just like morlum, has long been distinct. “Isaan migrants tend to live together, to speak Lao with each other, to listen to Isaan popular music, and, most of all, send money to relatives at home,” says Keyes. “Identification as khon isaan, northeastern people, is a primary identity even for those who have lived outside the region for years.”

Colonialism has fed this dynamic. Once the French gained control of Lao in 1893, they quickly noted that those living across the Mekong also spoke the same language as their new subjects, and attempted to unite all Lao under Gallic rule. Siam, as Thailand was then known, took umbrage and in 1904 reclassified all ethnic Lao within its borders as Thai — “just an inferior sort of Thai,” explains Streckfuss.

Nearly a century later, the differences were still great enough for telecoms mogul Thaksin Shinawatra to make a political career out of them. Though he was not born in Isaan and was in fact of Chinese descent (his mother came from a Hakka family and his great-grandfather was a migrant from China’s Guangdong province), Thaksin shrewdly decided to champion the region’s rural poor. He was elected Prime Minister in 2001 largely on their votes, in return for which he initiated populist policies such as microfinance loans, fuel subsidies and universal health care.

But Thailand’s entrenched elite soon tired of this parvenu, accusing him of buying votes from gullible bumpkins and even of angling to replace the revered King Bhumibol Adulyadej as the object of popular adoration. Despite an unprecedented re-election in 2005, Thaksin was ousted in a military putsch the following year. He was convicted of corruption in absentia — charges he insists are politically motivated — and remains in exile.

“He’s a businessman, sometimes insensitive to social plights, but that’s the extent [of wrongdoing] that I’ve seen,” Thaksin’s former spokesman, Jakrapob Penkair, told a recent luncheon meeting at Hong Kong’s Foreign Correspondents’ Club. “If he has committed any crime, it is the crime of being naive — of believing that Thailand was already a democracy.”

Thaksin’s popularity in the northeast has endured despite his ousting, and parties he backs have won every election this millennium, only to be removed twice by the military and three times by the courts. A popular movement, colloquially known as the Red Shirts, developed to demand his return — and a reciprocal royalist Yellow Shirt movement emerged to resist it.

The color-coded rivalry between them has convulsed Thailand for nigh on a decade now, with sporadic bloodletting claiming scores of lives and leaving thousands injured. This, in turn, has intensified the antipathy between the capital and Isaan. This became especially bitter during the six-month-long Shutdown Bangkok demonstrations that began last November, when Yellow Shirt protesters demanded the ousting of Prime Minister Yingluck Shinawatra, Thaksin’s sister, on the pretext that the northeasterners who elected her were too stupid to be trusted with the vote.

“In February, I was hearing 20-minute rants about the history of the Laos and how they were repressed — how [the Thais] came up on horses and put chains around our necks and dragged us away,’” says Streckfuss. This newfound pride wasn’t about identifying with fellow Lao people across the Mekong, he adds, “it was anti-Bangkok.”

That the Red and Yellow Shirt factions are ethnically, linguistically and geographically distinct has heightened fears of armed conflict. In February, before the coup, Red Shirt leader Suporn Attawong announced plans to recruit 600,000 young men across the 20 northern provinces to join a new progovernment Democracy Protection Volunteers Group. Since the putsch of May 22, caches of weapons have been unearthed alongside stores of Red Shirt propaganda materials. Last week, despite the obvious risk of detention, Red Shirt activist Ittipon Sukpaen threatened civil war on his Facebook page. Weapons are freely available in Thailand: according to one 2011 study, the country has an estimated 10 million firearms in civilian hands.

Even morlum mirrors this changing dynamic, though not in the bellicose way one might expect. “Many of the artists I’ve spoke to try to use their music as a vehicle for positive reconciliation,” says Gibson, “to say ‘we are all Thais.’” And that is, of course, true. It’s just that today — just as it was in the past — some Thais believe they are more Thai than others. 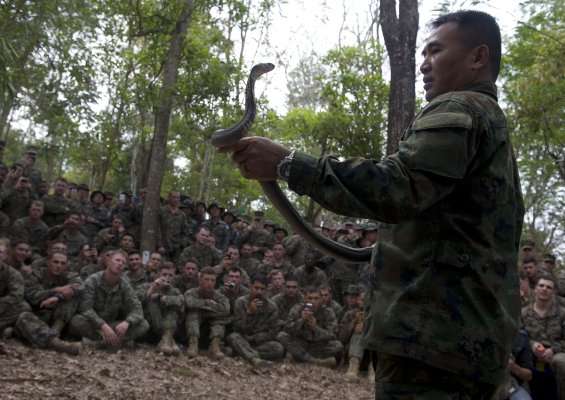 The U.S. Is Freezing the Thai Junta Out of Military Exercises
Next Up: Editor's Pick