AH-64 Apache helicopters like this one arrived in Baghdad on Sunday.
Jo Yong hak / Reuters
By Mark Thompson

Was it fair to tweet the Pentagon announcement late Monday afternoon that 200 more U.S. troops are headed for Iraq — bringing the total there about 750 — as the “5:34 O’Clock Follies”?

That’s a reference to the infamous “5 O’Clock Follies” conducted by the U.S. military in Ho Chi Minh City’s Rex Hotel during the Vietnam War. It was where the Pentagon’s local spokesmen offered up enemy body counts and other data suggesting that the U.S. was winning the war in Southeast Asia. “Early in the US phase of the war, the principal daily US press briefing became known among US newsmen as the ‘5 O’Clock Follies,’” a 1979 Army study said. “Nothing the best of the public affairs officers could do could ‘sell’ what the majority of the press had decided was a bad or at least a suspect policy.”

The term has become shorthand for the messy business of trying to sell war: a natural desire to try to put the best gloss on imprecise numbers, impossible to nail down as the situation on the ground evolves. But the Pentagon can contribute to that narrative by appearing to play “catch up” with what’s happening on the ground. That’s always a problem when the enemy appears to be succeeding, especially after the Pentagon pulled all of its forces out in 2011 (there’s a fair amount of debate over whether a residual U.S. force could have been left behind if the U.S. had pressed harder … and if President Obama hadn’t been so eager to leave).

The phrase has been popping up since Obama’s June 19 announcement that he’d ordered up to 300 U.S. troops to Iraq to advise the military of U.S.-backed Prime Minister Nouri al-Maliki amid the pounding it was taking from the rebels of the Islamic State of Iraq and Greater Syria (ISIS).

But there’s a lot more going on, as the Pentagon explained Tuesday:

As of Tuesday afternoon, the U.S. had 650 of a total of 770 newly authorized military personnel on Iraqi soil. There also are about 100 additional U.S. troops who were already in Iraq working on arms sales and military cooperation.

The dribbling out of deployments makes the situation on the ground appear grim. Rear Admiral John Kirby, the Pentagon’s chief spokesman, declined to say on Tuesday if al-Maliki’s forces have gained the upper hand against ISIS.

He disputed any notion that the U.S. is getting sucked into an expanding role. “There’s no mission creep because the missions have been clearly defined from almost the outset,” he said. “The situation on the ground continues to change. It’s very fluid. It’s dynamic.”

But Kirby also declined to put a ceiling on the ultimate number of U.S. troops the expanding Iraq mission might require. Obama “said he was going to send up to 300 for an assess and advisory mission … and before that, it was up to 275 for static security assistance, and then he added another 200,” Kirby said. “Is there a grand total? No.”

The Commander in Chief, he said, “needs to have the freedom to make those decisions as he and the military commanders and the civilian leadership here in the Pentagon advise him to.” 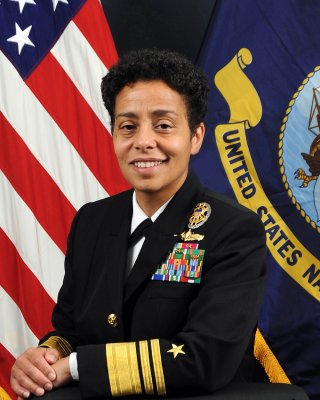 The Navy Is Getting Its First-Ever Female 4-Star Admiral
Next Up: Editor's Pick