President Barack Obama’s speech Tuesday was intended to call Congress to action on replenishing a fund for state and federal highway projects. Instead, it turned into a political rant against House Republicans, with Obama saying he’ll proceed without Congress’ help if need be.

The Highway Trust Fund is due to run out in 58 days, according to the American Society of Civil Engineers, putting 877,000 jobs and $28 billion in U.S. exports at risk. The fund is rapidly depleting due to declining gas tax revenues, a problem Obama wants to fix by eliminating corporate tax breaks. House Republicans, however, have balked at his plan.

“House Republicans have refused to act on this idea,” said Obama. “I haven’t heard a good reason why they haven’t acted, it’s not like they’ve been busy with other stuff.

“No, seriously. They’re not doing anything. Why don’t they do this?,” Obama added, before arguing that the U.S. spends a smaller portion of its economy on infrastructure than “just about every other advanced country.”

House Republicans, meanwhile, want to keep the highway fund rolling by ending Saturday U.S. Postal Service deliveries or enacting more stringent state online sales taxes. But in Tuesday’s speech, Obama was clearly frustrated by Congress’ inaction and with the increasing partisanship of the issue — House Republicans last month said they plan to sue Obama for what they argue has been the President’s abuse of executive actions, which allow the executive branch to take certain actions without approval from the legislature.

“It’s not crazy; it’s not socialism. It’s not the imperial presidency. No laws are broken, it’s just building roads and bridges like we’ve been doing,” the President said, adding that if House Speaker Boehner (R-OH) and his party won’t cooperate, he will continue to act independently.

“Middle class families can’t wait for a Republican Congress to do stuff,” Obama said. “So sue me. As long as they’re doing nothing, I’m not going to apologize for trying to do something.”

Write to Tessa Berenson at tessa.berenson@time.com and Becca Stanek at becca.stanek@gmail.com. 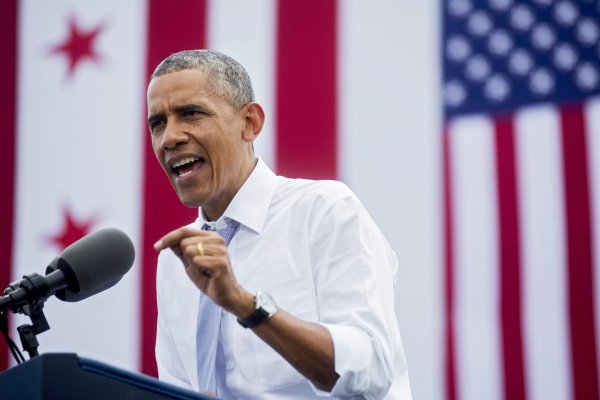