As Israeli Prime Minster Benjamin Netanyahu weighs the options for responding to the murders of three kidnapped Israeli teenagers, there is no shortage of advice—especially after the release, on the day the boys were buried together, of the recording of a call one made to police shortly after they were captured. The tape has only further agitated a grief-stricken Israeli public, increasing pressure on Netanyahu to act.

One option would be for Netanyahu to quietly order the assassination of a leader of Hamas, the militant Palestinian group Israel says carried out the abduction and murders. Israel has carried out such “targeted killings” of Hamas leaders in the past to retaliate against high-profile attacks on civilians. Exhibit A would be Ismail Abu Shanab, the prominent Hamas figure killed in 2003 by a missile fired from a helicopter hovering over the Gaza Strip, two days after a double-suicide bombing of a Jerusalem bus killed 23.

But Netanyahu might exercise restraint. In 1997, during his first term as prime minister, he approved a Mossad operation aimed at killing the Hamas leader Khalid Meshaal on an Amman street, in retaliation for a wave of suicide bombings inside Israel. The plan went awry: The Mossad agents were caught by Jordanian police, and their attempt to poison Meshaal by smearing a poison on his skin left him in a coma. To get the agents back, Netanyahu had to release not only the antidote for the poison used in the botched attempt, but also the jailed spiritual leader of Hamas, Sheikh Ahmed Yassin (killed in 2004 by an Israeli missile).

“You start these things, you never know where you’re going to end,” said Gabriel Ben-Dor, director of the National Security Studies Center at Haifa University. “The Israeli theory is Hamas does not care about its own people in Gaza being hurt, but they care about themselves. So Israel has been going after their [physical] person at times…But this is a dangerous game to play. The answer could be: You are killing our people, we will kill yours. That’s a dangerous policy to renew.”

And Netanyahu has shown no great appetite of late for such aggressive action. “Netanyahu, despite his fiery rhetoric, is a very cautious man, even a hesitant one. He’s been very very reluctant to expand the sphere of operations beyond what’s absolutely necessary. Which is good from the Israeli point of view…he’s a force for restraint,” says Ben-Dor.

Yet having declared that “Hamas will pay” for the teenagers’ deaths, the premier appears obligated to act. The 34 airstrikes Israeli warplanes delivered on Gaza targets on Monday night were not insignificant, but might be only the overture. Right-wing members of his coalition are pressing for a major assault on Gaza, even including ground troops, according to Hebrew news accounts. “The countdown toward a strike on Gaza basically began two days after the teenagers were kidnapped,’’ military correspondent Alex Fishman writes in the leading daily Yedioth Ahronoth.

The problem is that striking Hamas leaders inside Gaza is likely to lead to an answering salvo from Hamas, which has scores of missiles capable of reaching Tel Aviv and beyond. That reality prompts a growing number of analysts, including Ben-Dor, to advocate targeting the missiles themselves: a multi-day air campaign aimed at destroying existing missile stores, launchers, and the factories where the rockets are made. The time is right, they note, because Egypt has finally cut off smuggling lines from the Sinai by which Iran was able to re-supply Hamas in the past.

“The grim ending of the kidnapping, when coupled with Hamas’s dire situation, create an opportunity for an operation that will achieve a strategic outcome that will endure for a long time,” retired Maj. Gen. Giora Eiland argues in a Yedioth opinion column. “It would be best not to squander that on a purely punitive and retaliatory operation.”

But others warn that any strike on Palestinian territory will hurt not only Hamas, but also Mahmoud Abbas, the moderate President of the Palestinian Authority. Abbas, also known as Abu Mazen, both condemned the kidnapping and aided Israel’s investigation, at some cost to his public standing.

“It is in the State of Israel’s interest now to distinguish between Abu Mazen and Hamas,” says columnist Nahum Barnea, also in Yedioth. But Netanyahu has rarely taken into account the Palestinian leader’s political fortunes in the past. In fact, in the wake of the teenagers’ deaths, Abbas has even less room to maneuver than Netanyahu.

“There is criticism against him because he collaborated or cooperated with Israel and because he condemned the terror attack,” notes Kobi Michael, former head of the Palestinian desk at Israel’s ministry of strategic affairs. “He is criticized by both sides. He is trapped in a very tragic stalemate.” 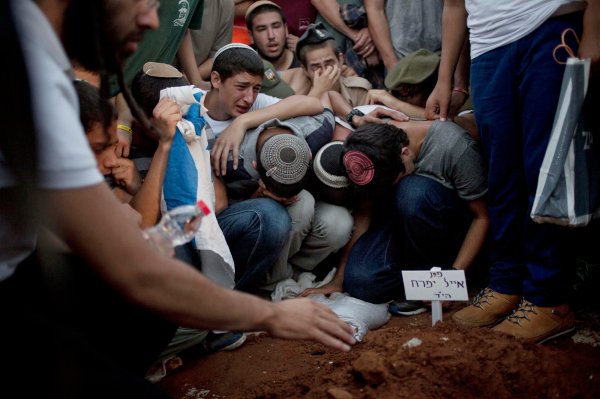